The 2011 DAKAR is complete and Quinn Cody takes home 9th place overall and becomes the rookie sensation of the 2011 DAKAR! 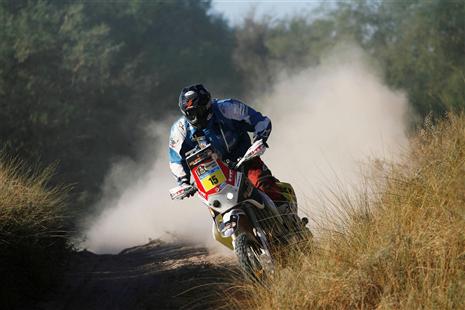 Huge Congratulations to Quinn Cody on completing a fantastic ride in the 2011 DAKAR! It cannot be overstated that Quinn was nothing short of spectacular in his first DAKAR Rally effort and earned top rookie status!

2011 was a tough DAKAR, more than half of the competitors that started on January 1st didn’t make it to the finish. The specials were long and hard until the very end, and unexpected weather like heavy rainfall made for dramatic day to day changes in the conditions and tested the competitors to the limit every day. The 2011 DAKAR course provided the most demanding conditions since it’s relocation to South America. The group including Honda Europe, JCR/Honda and American Honda have delivered a massive success proving that the Honda CRF450X with Lucas Oil and Dunlop tires has the durability to race in the harshest conditions that the world’s greatest Rally has to offer. Quinn finished in the 9th position with a Total race time of 56:17:10 in 14 days. Congratulations to all the participants that made the 2011 DAKAR rally a huge success.

‘Quinn did a spectacular job for his first rally. It was really key to our strategy for the future that Quinn finished everyday and every mile of the Dakar. This event is nothing like the racing we do here in North America. It truly is a test of spirit and perseverance. In 14 days and over 6,000 miles of racing, there will always be some trial or obstacle that will prevent the competitor from having a perfect “race”. Quinn proved he has what it takes to overcome the adversity and difficulties of the toughest rally in the world. I am very proud of Quinn, the Team Honda Europe- HT Rally crew and all the hard work they did to keep Quinn rolling day after day. I am very thankful to have the opportunity to show case Quinn and the Honda CRF450X in the biggest rally in the world. Special thanks to Lucas Oil, Dunlop and Super B for supporting us in this exciting endeavor. JCR/Honda is looking forward to Dakar 2012’.