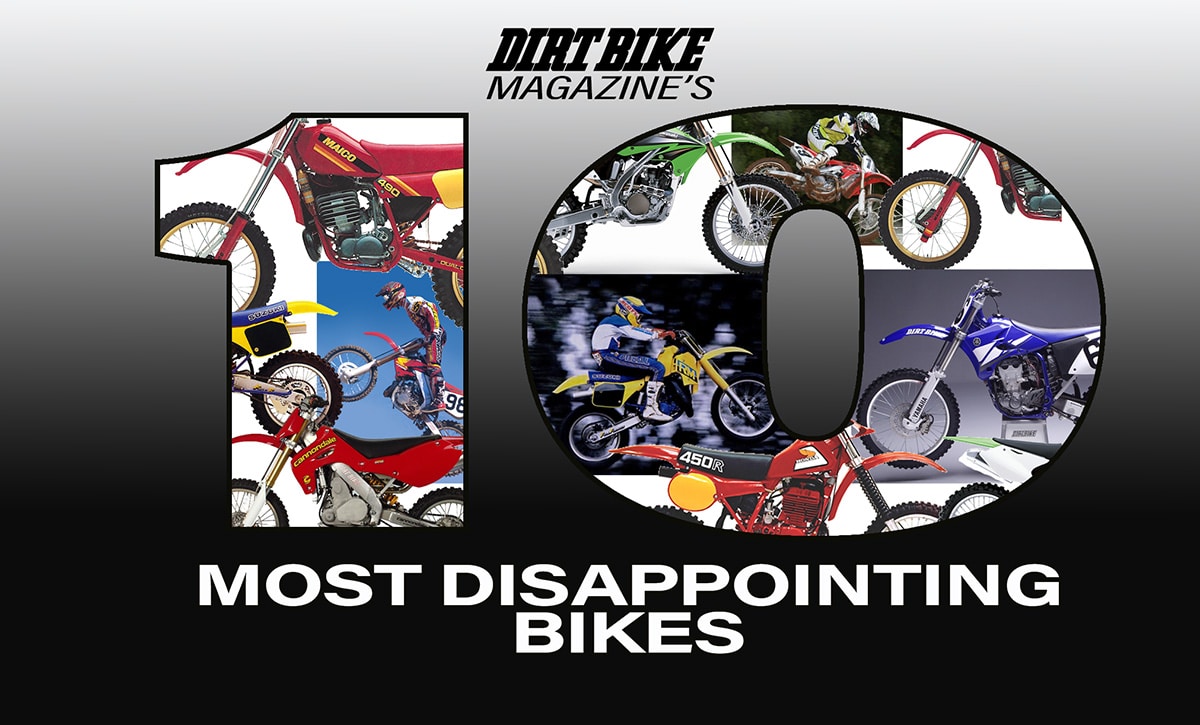 Over the years we’ve tested some great motorcycles at Dirt Bike Magazine. We’ve also encountered some real losers. We’ve been surprised by how good some motorcycles were and shocked by others that failed to live up to our expectations. The motorcycles that disappointed us most were the ones that had fantastic potential but didn’t deliver. This is a list of those MX machines, chosen from the archives of Dirt Bike since its inception in 1971 and listed in reverse chronological order. These aren’t necessarily the worst motorcycles we’ve tested. In some cases they showed germs of greatness that went unfulfilled. Others were, in fact, just plain bad.

Honda’s 2008 CRF450R was the greatest motorcycle of its decade. Any bike that followed would have had very big shoes to fill. Sadly, the 2009 CRF450R wasn’t just a poor replacement for the 2008 model, it was the worst four-stroke of the new era–even a 1998 YZ400F would have fared better in a comparison. There had been a changing of the guard at Honda and the new personnel was given the task of making fuel-injection work on a totally new motor. They also had to lighten the package, and reliability went out the window as a result. Overall handling was nervous and the motor had an on-or-off nature that made it hard to ride. Honda struggled for years afterward, making incremental improvements while others were getting ahead by leaps and bounds. Honda’s oddball priorities were underscored four years later with the use of Twice pipes on a bike that still had a ⅞-inch handlebar.

Okay, we never tested this particular motorcycle. That, in a nutshell, is why it was so disappointing. In 2005 we got a call from Buell, which was a subsidiary of Harley Davidson. They told us that Harley wanted to get into the dirt bike market. Again. They asked if we knew anyone who might be interested in working on the project. We mentioned a few names and they asked about Dave Osterman. “If you could get him he would be perfect,” we said. Not long after that, Osterman was fired from Yamaha and got a call from Harley Davidson within days. He was probably the right guy for the project, but it was doomed from the start. The motor was made by Bombardier and it was already outdated in 2006. It eventually landed in the Can-Am DS450 ATV. Osterman did an amazing job, but the project was canned in 2007. Probably for the better. We all know what happened to the market in 2008, but the news of the project’s demise was still a huge disappointment. 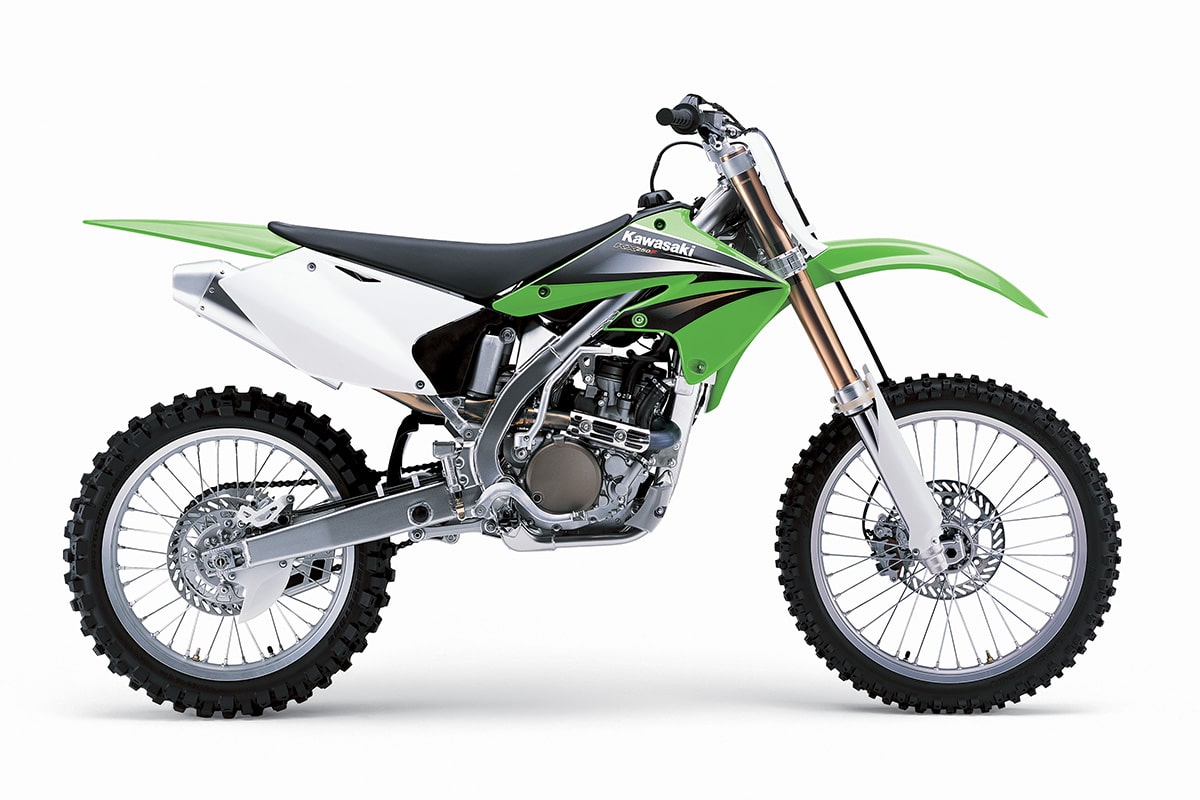 This was one of the strangest years on record. In 2004, Suzuki and Kawasaki were feeling the pressure of Yamaha’s engineering success in the YZ400F and YZ250F. They combined forces to create what should have been the ultimate 250 four-stroke. Kawasaki built the motor according to Suzuki’s blueprints, but the marriage wasn’t made in heaven. The bike was unreliable, overweight and not especially fast. Kawasaki made its own KX250F by 2006, but Suzuki stuck with the bike (which was assembled in Kawasaki’s plant) a year longer. That had to awkward. 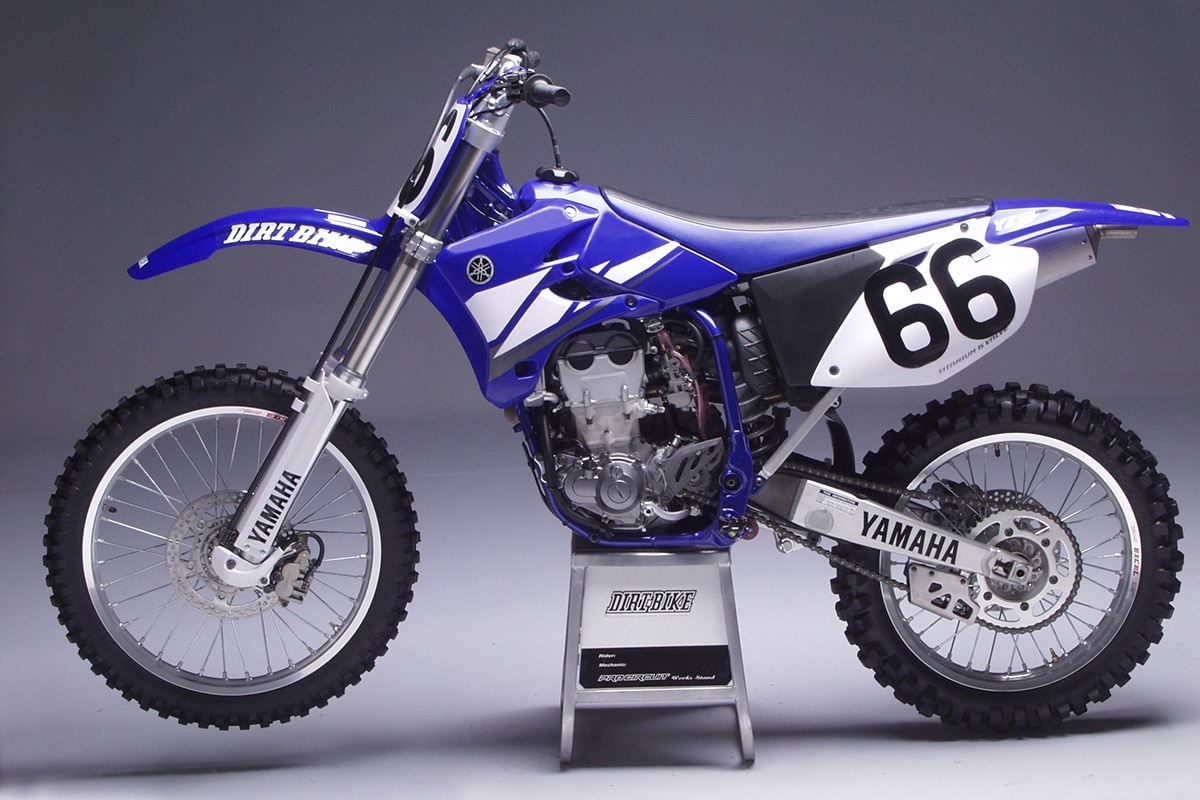 Yamaha pushed the advancement of motocross bikes to a whole new level in 1998 with the first YZ400F. Then, before anyone could respond, they raised the bar with the YZ426F. In 2002, however, Honda entered the game and Yamaha finally felt the pressure of competition. The 2003 YZ450F arrived and we were left wondering what happened? The four-speed YZ450F had none of the magic of the old 426 or the new Honda. It was powerful, but it didn’t handle as well and someone at Yamaha insisted it would be better without fifth gear. Oddly enough, Ty Davis and Russ Pearson thought it was a great desert bike, even without fifth gear. They used it to capture the AMA National Hare & Hound Championship in 2002 and 2003. That says more about Ty and Russ than about the bike, though. 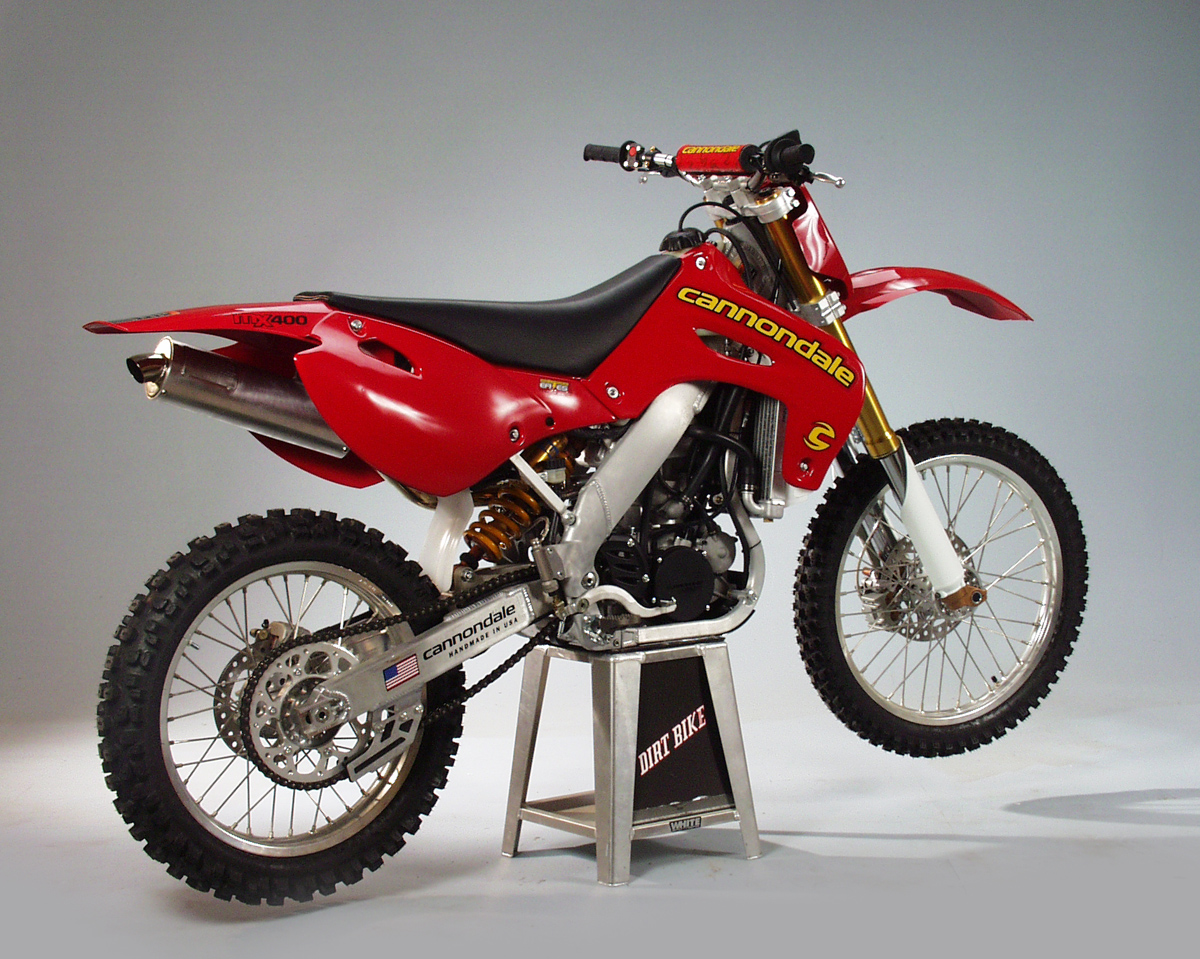 Much has been said about the Cannondale effort, but you gotta admire their intentions. Here were a bunch of guys who had no idea what they were doing and they almost made history. Cannondale CEO Joe Montgomery was a man who made decisions based on passion and gut feeling. That had served him well in the bicycle industry, where he single-handedly brought aluminum frames to the dominant market position. Passion and guts failed him in the motorcycle industry, though, where market research and experience might have proven more useful. The Cannondale MX400 simply bit off too much. Fuel injection, reverse heads and high-boy airboxes would eventually come to the market, but for Cannondale it was too ambitious. The reason they make the disappointment list isn’t because the motorcycle was so bad (although it was bad), but rather because they never had the chance to complete the project before a stock-market collapse forced Cannondale into bankruptcy.

At Dirt Bike, we were happy that Mike Young got the opportunity to ride for the Factory Vertemati team in the 1995 GP season, but sad to lose him as a test rider. The Vertemati brothers reached legendary status in Europe with Joel Smets, and Mike wrote to us saying that his factory bike was better than anything we could imagine. When the first production Vertemati was imported by Tom White in 1998, it was a very different bike. It was heavy and very difficult to ride. This was the result of internal conflict between Alvaro and Guido Vertemati and their Italian partners, who made massive compromises on the way to market. Eventually the company broke up. Massimo Monti picked up the pieces to form Vor, and another company with the Vertemati name came into being, but neither had the magic of the original that was raced in Europe. 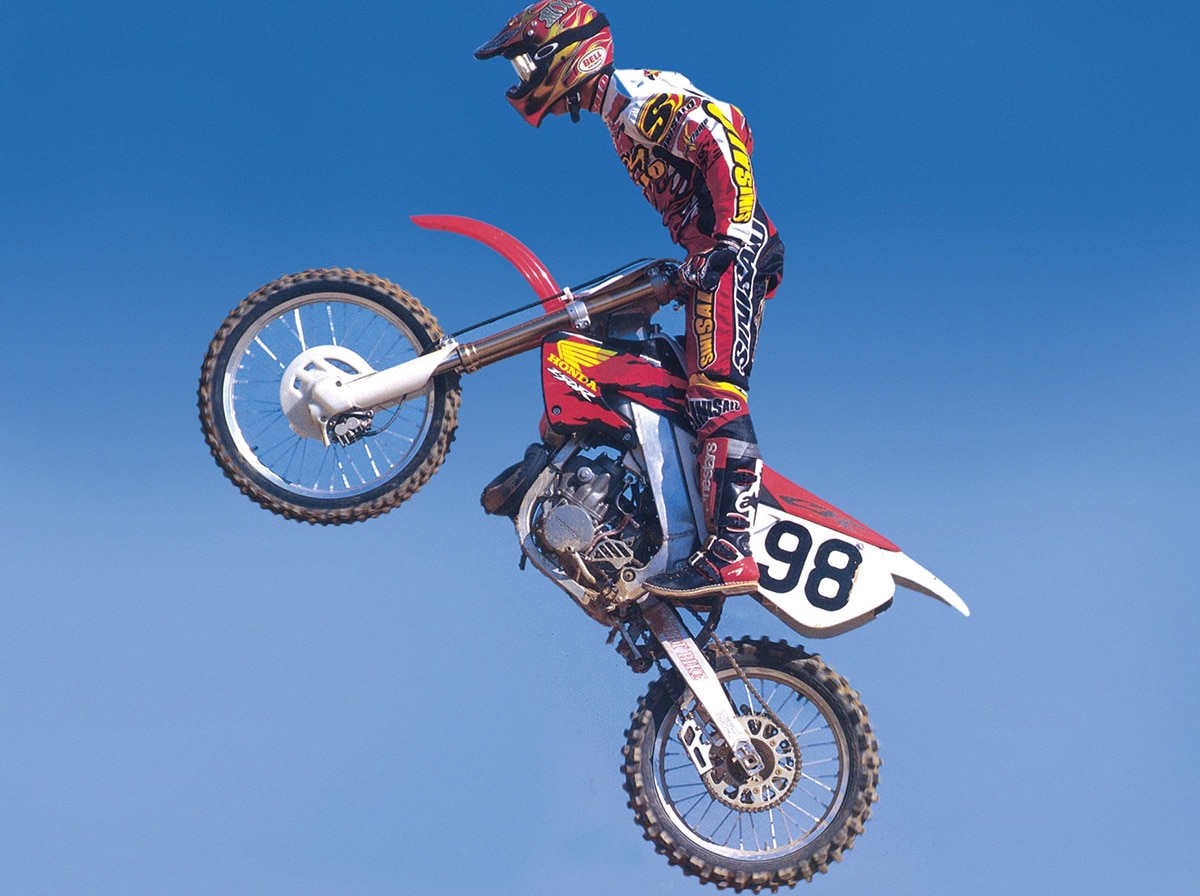 The first aluminum-framed Honda has entered the hall of infamy for a number of reasons. The first and biggest is that it was the bike that made Jeremy McGrath leave Honda. The frame, as history has decreed, was too stiff for the suspension of the day. Oddly enough, if Jeremy had stayed at Honda, he probably would have won the 1997 Supercross championship. Other Honda riders like Larry Ward and Michael Craig learned to love the new bike once the suspension was worked out. Regardless, the Honda was a harsh bike with a hard-hitting top-end motor that set the MX world against aluminum frames for years to come. 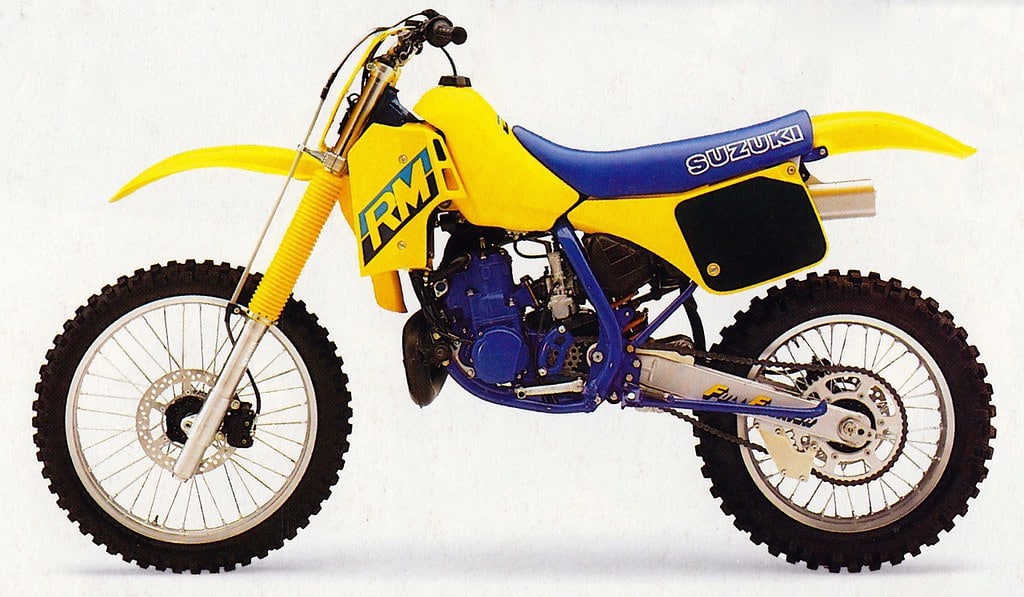 In the early ‘80s, Suzuki was on top of the world. The 1981 RMs and their Full-Floater suspension set a new standard for suspension in the motocross world. Suzuki was subsequently sued by an inventor named Don Richardson, who claimed that he had invented and patented the design. A jury agreed and awarded Richardson an undisclosed amount, which could have been as much as 19 million dollars. Whether or not that case was a factor in Suzuki’s fall is debatable, but the RMs of the mid ‘80s were a big disappointment. Suzuki redesigned the rear suspension in 1986, and again in 1987. At the same time, the motor lost its edge–most riders said a 1982 RM250 would walk away from any RM of the later ‘80s. 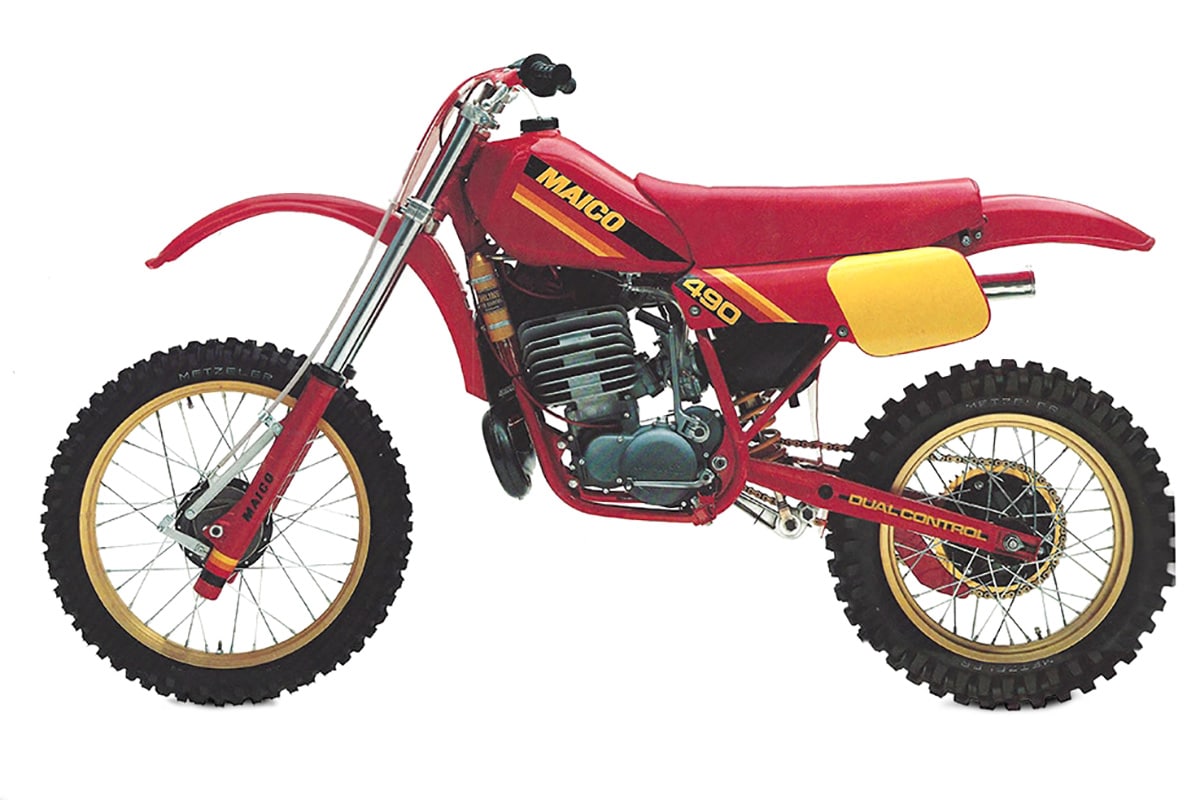 The 1981 Maico 490 is a legend. It came at the very height of Maico’s engineering prowess and has become the most desired Evo racer in the world. But in 1982 and 1983, the wheels (literally) came off at Maico. The company was run by Wilhelm and Otto Maisch and their offspring, who were in a bitter feud over control. The 1982 Maicos were the first to have single-shock rear suspension with a Corte & Cosso shock, but none of the earlier Maico engineering standards were evident. The bike gained almost 20 pounds, and the shock shaft broke every two or three races–apparently the top shock mount and the bottom one didn’t even line up. Quality control fell to such a poor level that many parts were leaving the factory without being heat treated. Wheels, in particular, were a sore point and that led to a number of consumer lawsuits in the U.S. In Europe, the company went into receivership. Maico West and Maico East, the two U.S. importers, filed for bankruptcy in 1983. 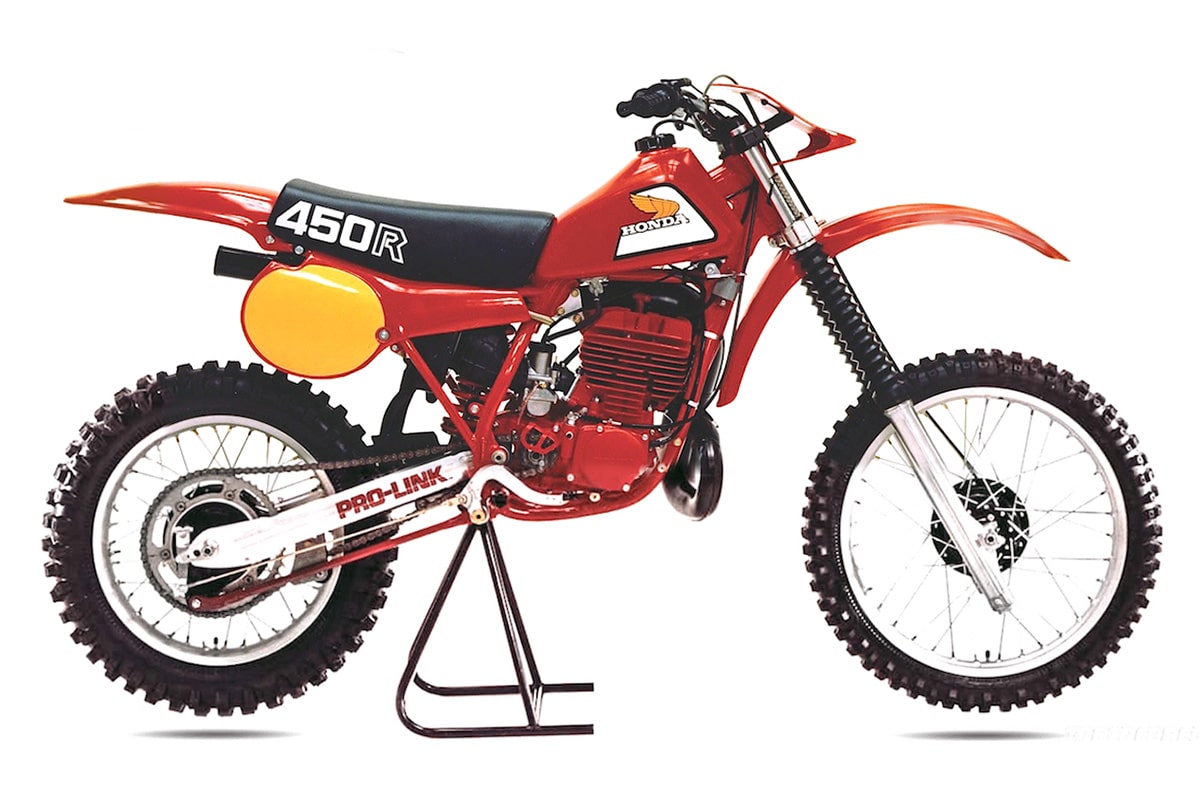 In 1980, Chuck Sun was the AMA 500cc Motocross Champion on a Honda. This was a head-scratcher because Honda did not sell a 500cc motocross bike. Never had, not even in 1977 when Marty Smith won the same championship. So it was with much fanfare that Honda finally brought an Open-class two-stroke motocross bike to the market. It was the 1981 CR450R. Even if the 450 had been a great machine, it would have had a hard time living up to expectations. And it wasn’t a great machine. The new single-shock rear suspension system was poor, the four-speed gearbox would shift itself into neutral at the most unexpected moments, and it was terribly unreliable. Interestingly enough, Honda turned it around within two years. The 1983 CR480R was one of the greatest Open bikes ever, and elements of that original 450 were still visible there. Sometimes the line between success and failure is very narrow.

Dishonorable mentions: Dirt Bike was around in the ‘70s, but back then, motocross was going through a stage of hyper evolution. Each year presented a crop of products that were far ahead of the ones that came earlier. Still, some deserve mention. The 1971 Suzuki TM400 has a special page in the book of all-time-worst motorcycles, but to be fair it was Japan’s first mass-produced motocross bike–who will honestly say they were disappointed with that? Same goes for infamously bad bikes like the 1978 Honda CR125 with its 23-inch front wheel and the 1980 Kawasaki KX125 with its regressive Uni-track suspension and enduro powerband. They were disappointing only because they weren’t as improved as they could have been.