Having missed the previous two rounds due to injury, DuVall returned to action with both guns blazing. In all, the Rockstar Energy Husqvarna rider won three of the six tests and finished the wet and slippery event with 1 minute and 36 seconds to spare over runner-up Steward Baylor.

“I had pretty high expectations coming in here; this race is pretty close to my house and the dirt is similar to what I ride, plus I feel like I’m close to 100%, so to get this win and to do it in the fashion that I did feels really good.”

In addition to chasing his brother, Grant, Steward Baylor spent most of the day pursuing DuVall and the KTM factory duo of Josh Toth and Ben Kelley. However, the fact that Steward rode a clean race counted for a lot on a day when most of the top 10 struggled with mistakes and poor line choices.

In six tests, the Tely Energy KTM rider went 5-4-5-5-4-3 and edged Toth out by five seconds for second, thanks to a strong final test.

“It’s typical for me to start slow and give away a bunch of time and then to get aggravated and start picking people off later in the race, and that’s how today went,” said Steward. “I think it’s a mental thing; I’m worried about my knee. It still gives me trouble which weighs on my mind.”

Steward took control of the series standings with his second place finish, after coming into the race tied with Toth for the lead.

Toth rounded out the podium in third with a steady and relatively event-free performance.

“No major drama or anything, I just started off slow,” said Toth. “I was riding smooth but way off the pace, but I picked it up midway into the race. I had a really bad time in the last test and that cost me second place. It was so slick out there, and I felt like I was riding a good pace, but then I would hit a slick spot and it would be gone. That happened over and over.”

KR4 Husqvarna’s Cory Buttrick turned in a spectacular ride for fourth, beating out Ben Kelley by 17 seconds. Buttrick is one of the only Pro riders who works on his bike at the races, although he had support this weekend from his father, Dennis.

Grant Baylor started off the event with a win in the first test, however the Tely Energy KTM rider missed a turn in the transfer section heading to test two and started the test late, which left him 57th fastest for the test. Despite the huge hole the mistake put him in, Grant was able to salvage a fifth overall for the day.

Ben Kelley battled most of the day with Toth for second place, however the Trail Jesters Racing KTM rider broke his front brake rotor in the final test when his front wheel struck a tree, dropping the Connecticut down to sixth.

Eight-time national enduro champ Mike Lafferty rode the event on the same 1997 KTM 250 EXC that he won his first national title on. KTM restored the bike to racing condition and Lafferty entered the AA class where he finished a credible seventh.

“Riding that bike brought back a lot of memories,” said Lafferty. “The bikes have definitely come a long way, especially in the suspension department.”

Lafferty had a fairly uneventful race until the final test where he broke his throttle cable. In typical Lafferty fashion, the New Jersey native finished the event by wrapping the frayed cable around his thumb and pulling it with his hand.”

Jarrett Mohn took the win in the NE Pro2 division, edging out AirGroup/Enduro Engineering Husqvarna’s Jake Froman by 10 seconds. After the fourth test, Froman led Mohn by one second in the battle for the class win, however Mohn turned up the heat in the fifth test and finished 50 seconds faster than Froman, giving the KTM rider the lead again. At the finish, Mohn took the win with Froman in second and AirGroup/Enduro Engineering Husqvarna’s Logan Lowrey in third.

“My thumb was really bothering me in the last test, but the rest of the day went pretty good for me,” said Mohn. “I really enjoyed the trail and when I’m having fun I tend to ride my best. It feels good to get the win.”

Tayla Jones continued her win streak in the Women’s Elite class. The KR4 Husqvarna rider won three of the five tests ridden by the class and finished the race with a 13-minute cushion over Trail Jesters KTM Racing’s Mackenzie Tricker.

“I had a couple of crashes, but overall it was a good day for me,” said Jones. “I liked the tests better than I thought I would because of the rain and I felt like I rode pretty well.”

Vincent Smith won the Open A class ahead of fellow KTM riders Eric Douglass and Kole Hensley, while Steve Leivan won the 40+ class on a Sherco, with KTM riders Jeremy Ketchum and Terry Yiengst in second and third.

Click the image below for results of each test. 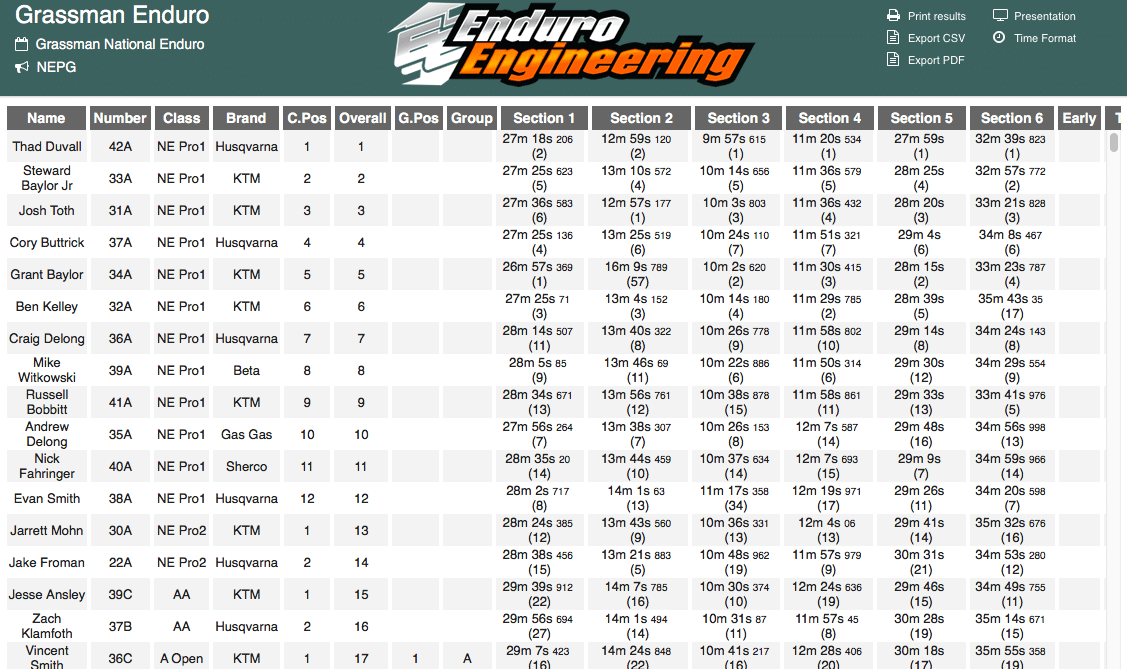