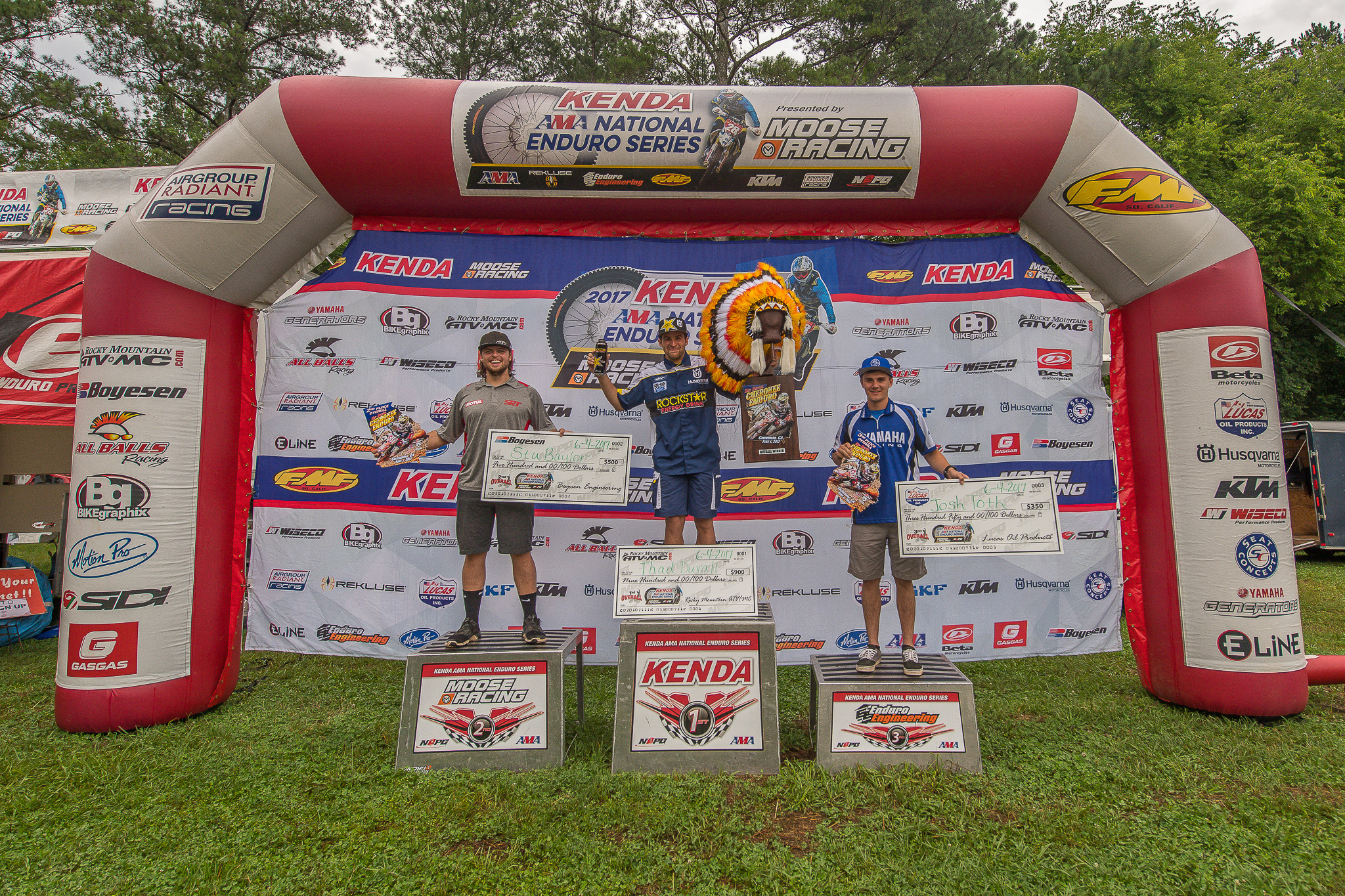 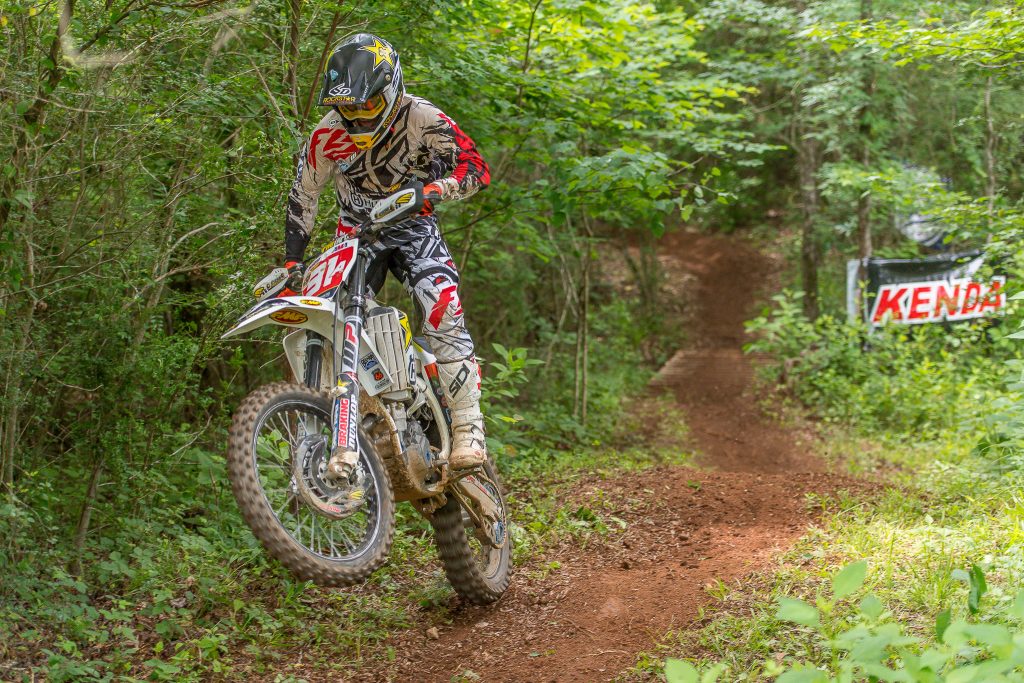 Thad DuVall grabbed his second win in a row at this weekend’s Cherokee National Enduro in Greensboro, Georgia – round four of the 2017 Kenda AMA National Enduro Series presented by Moose Racing. DuVall not only had to battle a formidable lineup of competitors, but the Rockstar Energy Husqvarna Factory Racing-backed rider also had to fight the elements, as a hot, humid and dry day turned turned wet and muddy when rain storms moved into the area about halfway into the event. Despite the extreme conditions, DuVall won five of the six tests and took the overall win by one-minute-and-thirteen-seconds over series point leader Steward Baylor Jr. at the end of 56 miles of racing. With the win, DuVall cut into Baylor’s point lead, and now sits just eight points behind Baylor in the series standings with just five rounds remaining.

Although things went DuVall’s way for most of the day, there was some drama in the third test when he crashed hard and at one point wasn’t sure he could finish. “I hit my head pretty hard and it was hurting pretty bad,” said DuVall. “I wasn’t sure I could continue, but I went into the fourth test and I just wasn’t all there. Steward ended up beating me in that test, but I regrouped and by that point I had a pretty good cushion. I really just needed to cruise, but I felt like the slower I went the more mistakes I made. I felt like the harder I charged the better I was, so I came back and won the last two tests. I honestly didn’t think I was going to be able to finish after the fourth test – I was sick and didn’t feel well, but I just cleared my head and ended up winning.”

Steward Baylor came into the event having spent the previous week in the hospital due to a virus. The SRT Racing KTM rider admittedly didn’t have the best week of practice prior to the Cherokee and came into the event hoping to salvage a top-five finish, however, the South Carolina rider was able to keep DuVall honest all day and even won the fourth test. In fact, Baylor didn’t finish worse than second all day. “I came in a little bit behind the eight-ball, after spending last week in the hospital, but I rode well today,” said Baylor. “I wasn’t expecting to do this well, but we kept it tight and hopefully we can bounce back from this and get back on top of the podium. It’s good to come out here and come away with a good finish after all that happened last week.”

Josh Toth is still learning the ropes in the national enduro series, but the Connecticut rider picked up steam as the day progressed and came on strong in the last three tests. The Am Pro Yamaha rider claimed his best finish to date with a third. “I rode pretty good in the beginning, but I couldn’t stay off the ground,” said Toth. “I like the mud, so when it started raining I think I got stronger. I’m getting better at this tight stuff and I definitely had a lot of fun.”

KR4 Arrive-n-Ride Husqvarna’s Grant Baylor turned in a steady day for fourth. “I had pretty good rides in the second and third tests, but I was a little off the pace in the fourth test,” said Grant. “I was sitting about 30 seconds behind Toth in third heading into the final test and I went in there and pushed really hard and ended up crashing, so I had to settle for fourth.” Grant still has a solid grip on third overall in the series standings, sitting nine points ahead of Russell Bobbitt, who was fifth overall at the Cherokee. Bobbitt came into the event hot off of a podium finish at the previous round in Louisiana, but the FMF KTM Factory Racing-backed rider struggled with suspension settings at the Cherokee and was a bit off the pace.

Finishing a tenth of a second behind Bobbitt in sixth was Cory Buttrick. The SRT Racing KTM rider was third fastest in test three, but tests four and fifth didn’t go well for him. Heading into the sixth and final test, Buttrick was 13 seconds behind Bobbitt for fifth, and he ended up beating Bobbitt in the test, but came up just a tenth of a second short, which left him with sixth. Solid Performance KTM’s Jesse Groemm made the long drive from New Jersey to finish seventh, crossing the line a minute-and-twenty-seven seconds behind Buttrick.

Eighth overall and first in the Rekluse/Expert-AA class was Thorn Devlin, who has won all four rounds in the division so far. The AirGroup/Enduro Engineering Husqvarna rider finished 27 seconds ahead of eighth place overall and five-minutes-and-seventeen-seconds ahead of Logan Lowrey, the second place finisher in the Expert-AA class. AirGroup/Enduro Engineering Husqvarna’s Tyler Vore was third in the class and 16th overall.

In the Women’s Elite class, Aussie off-road star Tayla Jones claimed her fourth win of the series, putting her KR4 Arrive-n-Ride Husqvarna on top of the podium ahead of Husqvarna rider Sarah Baldwin and KTM rider Ashley Copeland. Jones beat out Baldwin by almost nine minutes, while Copeland finished another five minutes back in third.

During the rider’s meeting, the NEPG held a moment of silence in remembrance of Dale “Cookie” Cooke, who passed away on June 1 from complications suffered during a bicycling accident. Cookie was a longtime member of the off-road community and most recently drove the off-road rig for Team KTM.

The 2017 Kenda AMA National Enduro Series presented by Moose Racing resumes action with round five of the series on July 23rd in Cross Fork, Pennsylvania for the Rattlesnake National Enduro. For more information on the series check out www.nationalenduro.com. 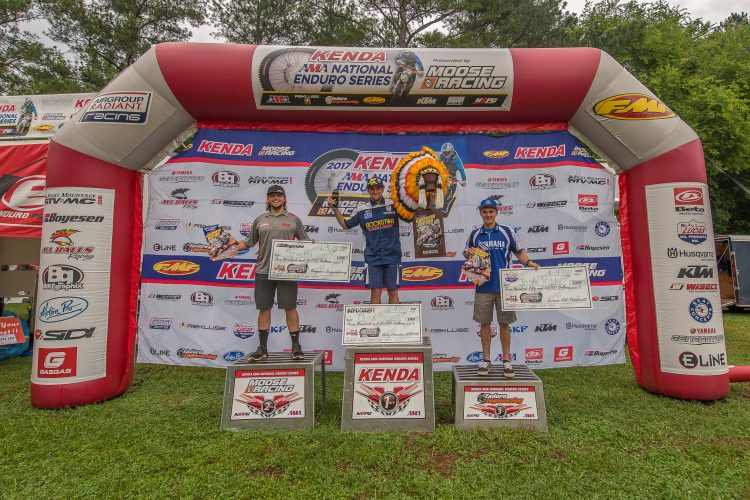