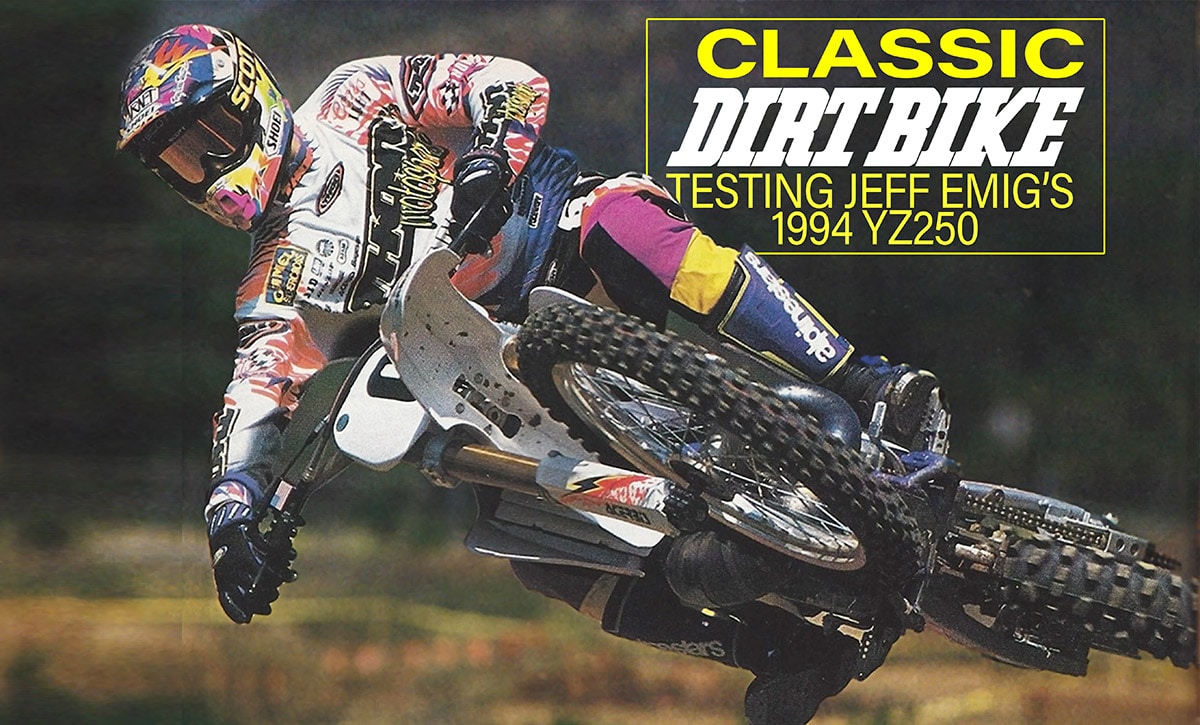 In 1994, Jeff Emig was rapidly becoming a hot commodity on the pro motocross scene. He pulled holeshot after holeshot, which prompted Roger DeCoster to call Team Yamaha to ask if Dirt Bike Magazine could do a test of Jeffro’s YZ250. When Roger calls, people generally pay attention, so Jeff, Bob Oliver and Steve Butler met us and rolled out the red carpet. The following story appeared in the August, 1994 issue of Dirt Bike. 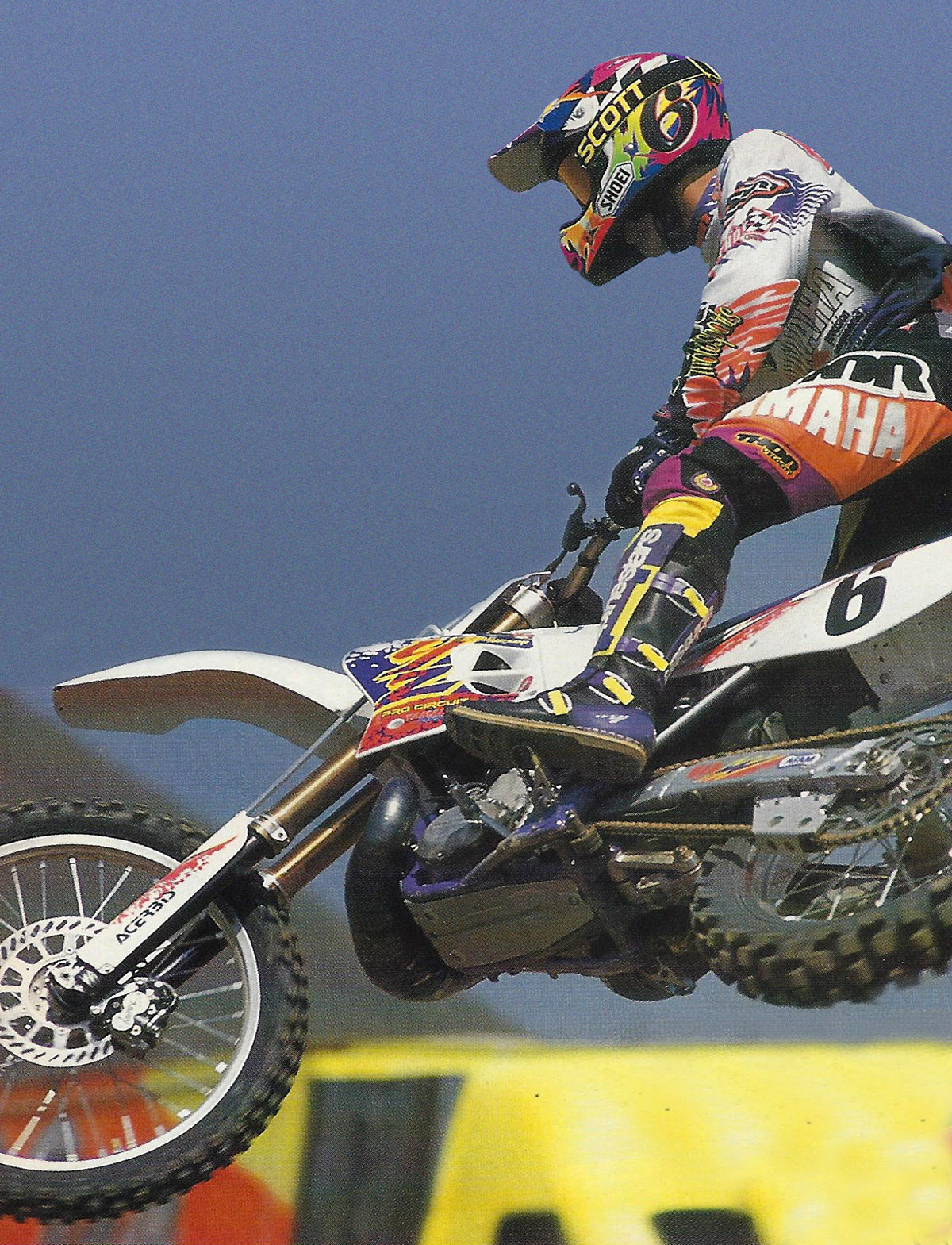 Roger DeCoster, senior tester Jim Holley, Torquin’ Tim and Shane Trittler sat in the air-conditioned splendor of Team Yamaha’s race hauler, bench racing with half of Team Yamaha. We had spent the day at Trittler’s Castaic Lake (California) Motocross, testing Jeff Emig’s works YZ250. Steve Butler, Emig’s mechanic, asked what we really thought about the bike. Roger cleared his throat, but Emig jumped in. Pointing to Roger and the Lumpster, Emig said, “You guys are two of the best test riders on Earth … don’t you have five world championships between you?”
Lump barely managed to keep his bottled water from living up to its name Crystal Geyser. The meeting/eating room erupted in laughter, then Roger artfully answered the question. Ever the diplomat, DeCoster talked of a killer motor, excellent handling and the unexpected ease of riding. Roger expertly skirted the negative–that Emig’s personal setups were almost as weird as Damon Bradshaw’s. Bradshaw likes ape-hanger handlebars, levers pointing at the sky (including the brake pedal) and a hit that would level Mike Tyson. Damon is definitely from Planet Weird. Emig may not be from Weird, but he might have been abducted there a time or two.
We rode the bike exactly as it was set up for Jeff and the Seattle Supercross. Emig’s levers didn’t point to Planet Weird like Damon’s, but his bars did. Jeff prefers his bars high and rotated farther forward than normal. He also likes an extremely stiff fork and lots of rear-end sag. Emig is the stadium version of Danny Hamel, who puts all of his weight over the fork and lets the rear end dance to its heart’s content. Only Jeff’s bike doesn’t dance. It leaps, at least with him aboard. None of the Dirt Bike testers could adapt to Emig’s setups, and even Lumpy could not make the fork bottom after Butler had backed off of the fork’s compression two clicks.
One thing is for sure, though: the bike was even faster than it was weird. It’s no wonder that Yamahas had holeshot 10 of 13 supercross mains this year.

Bob Oliver grinds the cylinders and heads for Team Yamaha’s YZs, so he’s a huge part of the success of the holeshot express. Describing the process by which a production YZ250 becomes a Team Yamaha weapon, Oliver said, “We tear each bike completely apart and sandblast the frame to check for flaws before repainting it in team colors. The engine will be completely disassembled and checked to make sure there are no major flaws. Basically, the whole lower end is left standard, although we assemble it to optimum specs. We used to polish the gears, but the new 250s don’t need it. Now, they work right in during break-in. The ignition, gears, crank and clutch are all left stock.”
Bob then does the top-end work, and the completed motor is wedged into the now-purple frame. Pro Circuit supplies the pipe and silencer, while Boyesen provides the RAD valve reed assembly and alloy ignition cover. The stock carb is replaced with a special 38mm D-slide XTM Mikuni, and the airbox is slotted heavily. We asked Oliver if the public could buy the same RAD Valve as Team Yamaha uses. “Eyvind likes to keep progressing,” Bob said, “so he’s always experimenting with new reed tensions and the like. We run what he comes up with, but I’m not positive the exact same thing is available to the public.” .
You can also buy the YZR accessory titanium bolts kits (including swingarm pivot and cylinder studs) and Ti sub-frame. Oliver said, “We’ve bent the stock steel subframes, but Ti is resilient. We haven’t made one fail yet.” Team Yamaha also uses accessory sticker and seat cover kits. You can’t buy a full works YMUS cylinder, but Wrench Report top ends are available.
Kayaba provides works suspension components, with titanium oxide coatings on all of the steel parts (the lower fork legs and shock shaft). Internal aluminum pieces are anodized, so oil contamination is no longer a problem, and the suspension lasts more than one race. “We’ll only go into the fork or shock if we need to change the settings to suit the track,” Butler said. “We kept a close eye on it at the beginning of the season and found the oil would last two races, at least.”
Most of the other modifications are done more for lightness or performance than reliability, according to Oliver. “We use chromoly axles that aren’t available to the public, because they’re made to fit the oversized magnesium hubs. We also use mag fork axle bosses [from KYB], rear caliper carriers and impeller covers. The linkages, triple clamps and lower fork leg guides are CNC-machined from billet aluminum. The slider guides are made by KYB and Yamaha Japan.”
Footpegs are surprisingly stock, but the rear brake pedal gets a lot of attention. A foam pad is safety-wired to prevent mud from fouling the lever, and a Brake Snake keeps it from being bent, should Jeffro snag a hay bale. Brake pads are stock at both ends, but the rest of the front brake is works Nissin, right down to the 250mm disc and special brake line. The rear brake is stock, except the plastic caliper piston is replaced with a titanium puck, to fight heat-fade under Emig.
With the mag, Ti and billet parts, Emig’s bike weighs in at 218 pounds in supercross trim. With sand tires and light-weight tubes, Butler said, “it would weigh in right at the 2l6-pound limit.” 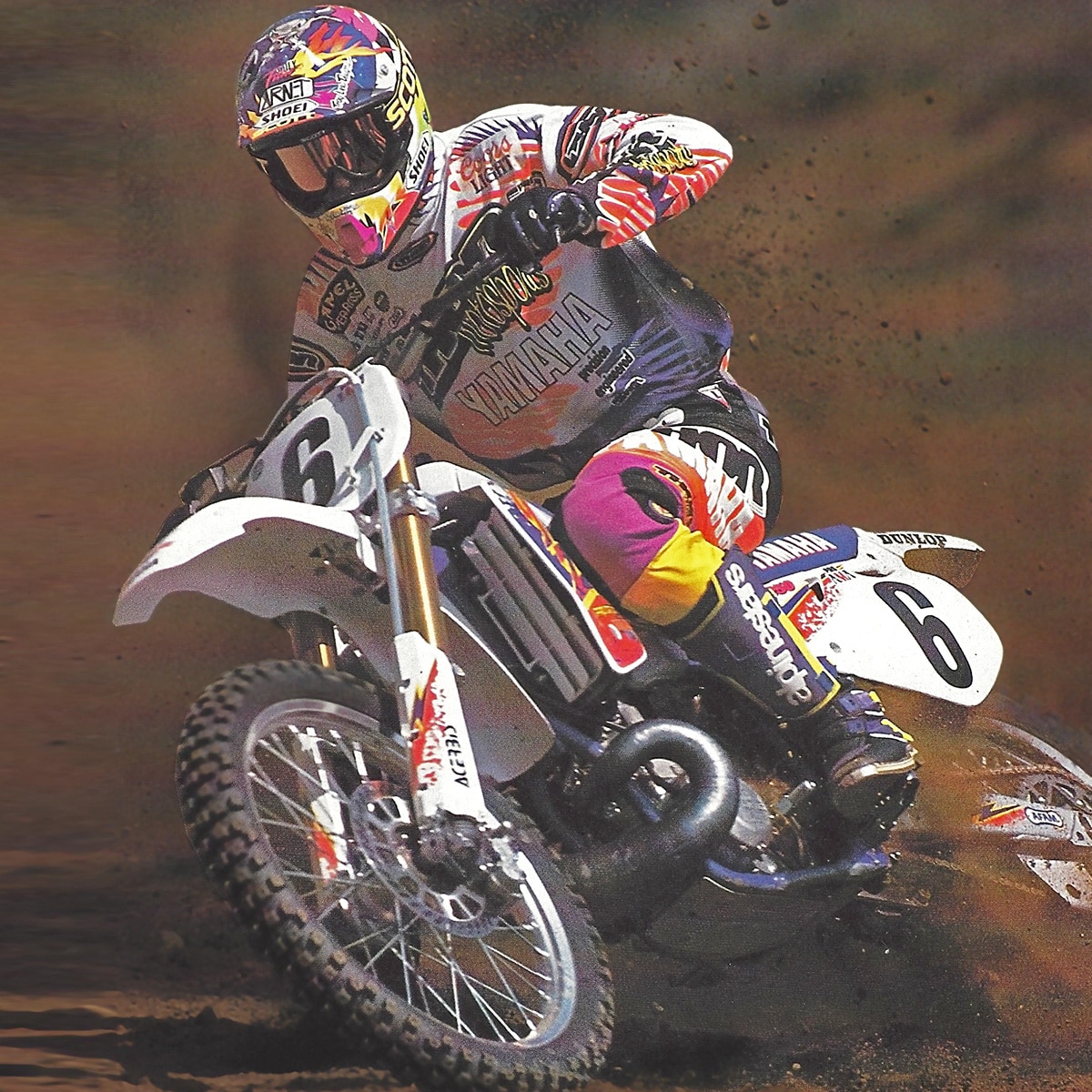 Although none of us could ride Emig’s bike like he does, we came away very impressed with the overall package. DeCoster was all warm and fuzzy over the motor and ease-of-riding. “The motor is really nice,” Roger said after umpteen laps, “and it’s very user-friendly. Power is very smooth, with no hit, ever. It’s always pushing you forward. The slicker the track gets, the bigger the advantage over the competition gets, but there’s still plenty of power for tacky conditions. There’s a very smooth overrun, too. This motor would be a big advantage on a hard track like Hangtown, Carlsbad or any supercross track.”
Power is smooth, torquey, seamless, crisp. Amazingly, vibration is minimal, despite the crank being stone stock. Roger attributed this to perfect jetting. “This is a happy motor. It wants to rev, and it responds instantly to the throttle. If a motor has too much compression or is laboring with too-rich or too-lean jetting, it isn’t happy; it doesn’t want to rev.” DeCoster also gushed about the Yamaha’s handling, despite Emig’s taste in suspension. Jeff likes a lot of sag (100mm, where most fast YZ guys use 90-95mm) and an extremely stiff fork. With such a chopper-esque setup, you would think the bike would need an Act of Congress to turn-wrong.
“Of all of the fast guys, Jeff seems to use the most droop [rear sag]. I turned in the preload 1.5 turns and liked the bike a lot better, but it worked well as it was. Where the stock YZ would take the occasional weird hop, the rear of the Emig bike never deflects. It stays straight over everything, and the bike turns surprisingly well. It seems like Yamaha is using a different offset, one with less trail. Steering is extremely light, even with all of that sag.”
We asked Oliver about the offset, but he said steering geometry was left stock: “We experimented with various offsets earlier in the year, but we settled on the stock settings.”

Roger complained a bit about the stiff fork, but feels the bike is very predictable and easy to ride. “The fork is fine when taking big hits, but it’s too hard on the little bumps. The rear feels great everywhere. The bike really hooks up well, especially on hardpack, yet you can do some impressive sliders. It’s very predictable. The brakes are also very usable. They may not have the strength of works Honda or Suzuki brakes, but they get the job done. In slick conditions, it seems like the Hondas and Suzukis lock up the front wheel too easily. If you clip a hay bale or a competitor with your lever, you can go down, easily. For these conditions [the track dried out in the afternoon], these brakes are excellent.”
So Emig’s YZ is the ultimate bike for less-than-perfect track conditions, but it has the boost to lead the pack of heavy-hitters into the first turn, and beyond, in perfect traction.

WHAT GOES ON BETWEEN MAINS

Having the Team Yamaha tractor-trailer rig makes the job easier for Butler (and for Brian Lunnis, Mike Craig’s mechanic) because it eliminates driving a box van to the next race. In fact, Butler and Lunnis have two of the easiest jobs on the circuit. Why? Because they don’t have to completely rebuild the bikes between races. “We’ve found that the 250s last two races,” said Butler, “without us having to races, along with the engine cases. So, basically, it’s a new bike every four to five races.
“I’ll put in a new clutch before the heat. That clutch will go through two or three starts on race day and about 20 starts during the next week, at press day, practice and testing. Jeff is pretty good on the clutch. Like most pros, Jeff is really particular about the clutch, throttle and brake, and I’ll have to change suspension, tires, jetting, and so on, from track to track.”

IT WORKS FOR JEFFRO

Emig estimates that he was first into the first turn at half the mains run so far this year. He usually entered the first turn with another Yamaha rider or two, however, and conservative riding has cost him the early lead on a few occasions.
Emig just hasn’t been aggro enough to keep the lead. His bike is working well for him, though. Jeffro lands front-wheel-down on every jump, sometimes clipping the lip with his front wheel, like an American-born Jean-Michel Bayle. Emig works at staying low so he can get his Yamaha back on the ground for some serious acceleration. Watching him style at Castaic was almost as much fun as riding the bike ourselves. Almost.