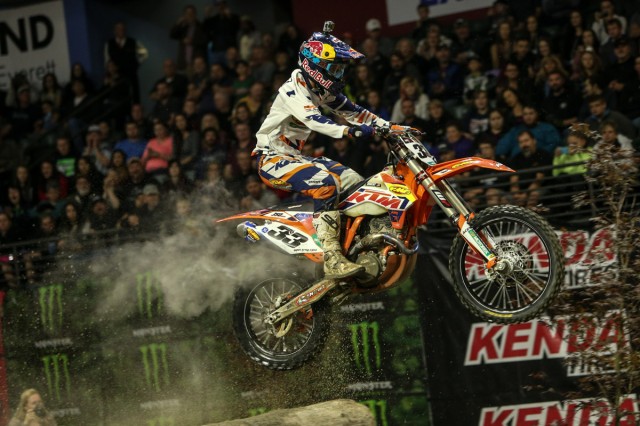 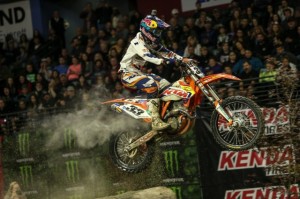 Webb, Haaker and Robert were also the three heat race winners on the evening to earn an extra championship point each. Red Bull KTM’s Taddy Blazusiak had an off night as he got second in his heat and then finished fourth in the main. 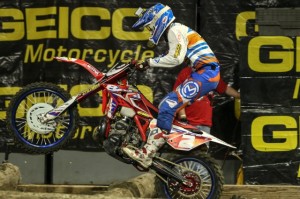 The top six qualifiers do a Hot Lap against the clock during the evening show to earn their gate picks and another championship point for the fastest qualifier and GEICO supported Webb narrowly edged Robert to get that point.

In the main event, Husqvarna’s Mike Brown took the $500 Nexen Tire Holeshot award and was followed closely by Webb and Cory Graffunder. Webb passed Brown to take the lead on lap one and quickly opened a decent lead. Haaker and Blazusiak were both outside the top five on the start but quickly moved to third and fourth respectively as they completed the first lap. 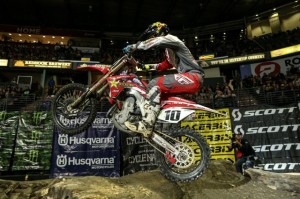 Webb led for nine of the twelve laps and seemed to have another win in hand until he got stuck in an incredibly difficult rock section that caused problems for nearly every rider during the evening. Robert and Haaker both passed Webb and engaged in their own shootout for the win. Haaker closed right onto Robert’s rear wheel as they hit the rock section on the penultimate lap and then took his own tumble. Haaker remounted quickly and closed back in on the last lap but Robert held on for his first GEICO AMA EnduroCross win.

Webb held on for third and Blazusiak took fourth ahead of Brown. Bobby Prochnau took sixth on his RPM KTM, Max Gerston was seventh on a Beta, Kevin Rookstool took eighth, Ty Tremaine ninth and Cory Graffunder rounded out the top ten.

Although Robert won an X Games Enduro X gold in Germany in 2013, this marked his first ever GEICO AMA EnduroCross win. “I have been working so hard for this for three years” Robert said. “So it feels good to get the win. Now I get to go to Argentina next week to represent the United States at the ISDE so this is a great confidence booster.” 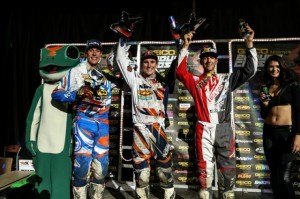 For Haaker, the solid second allowed him to gain points on both Webb and Blazusiak. “Congrats to Taylor for staying up out there and being consistent” Haaker said. “I tried to make a pass and just went down right at the end but I am glad it was an exciting race for you fans”.

Webb was a little disappointed to give away what seemed like a comfortable win. “It was a great night and a little mistake there cost me the lead” Webb said. “My clutch lever was twisted down so it took me a little while to get going again.”

Blazusiak was upbeat despite finishing off the podium for the first time in 2014. “It wasn’t the best of nights for sure as we had a lot of problems” Blazusiak said. “We have a few weeks to regroup and will come back strong for Boise.”

Despite finishing third, the bonus point for the heat win and additional bonus point for setting the fast time during the hot lap allowed Webb to increase his lead to seven over Blazusiak. Haaker gained one point on Webb and is now nine back. Webb has 165, Blazusiak 158 and Haaker 156 with two races remaining.