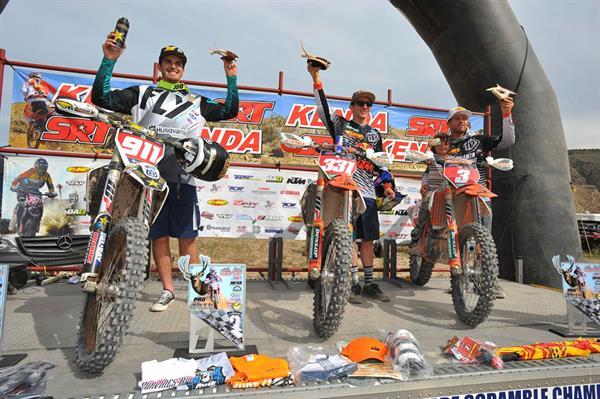 PANACA, Nev. – FMF KTM Factory Racing Team’s Taylor Robert put forth an impressive performance on Saturday to claim the overall victory in his first-ever appearance in the AMA National Hare & Hound Championship Series. Bonanza Plumbing/FMF/KTM-supported rider, Gary Sutherlin, made a strong return to the series following four months of injury-recovery to capture a close 2nd place finish at Round 5. It was a tough day for defending AMA National Hare & Hound Champion Ivan Ramirez, who also made a return from injury on Saturday to ultimately finish 10th place in the Pro Class as the result of a late-in-the-race crash.

Robert didn’t get the best jump off the line but he was able to power his KTM 450 XC-F into the lead at the end of the bomb. From there, Robert maintained a dominant position throughout the 25-mile loop where he checked in nearly one minute ahead of Sutherlin in the 2nd place position, also aboard a KTM 450 XC-F. By the end of the first loop, Ramirez was sitting just outside the top five in the overall running aboard his KTM 450 XC-F.

Robert and Sutherlin maintained their momentum into the second loop, which was 33 miles long. This time it was Sutherlin who upped the pace to best his KTM-mounted teammate by over 30 seconds in the second segment. Meanwhile, Ramirez continued to charge ahead just outside the top five as he became more comfortable on the bike.

Robert and Sutherlin went head-to-head in the final 30-mile loop of the day as the duo held closely matched times heading into the final moments of the race. The dusty conditions lent a hand in making passing opportunities difficult, which played to Robert’s advantage throughout the day. Despite a hard-fought effort by Sutherlin, Robert was able to maintain his distance out front to capture his first-career National Hare & Hound victory in what would serve as his first time racing the series.

“This was the first Hare & Hound that I had ever done so it was kind of weird to be up front the entire race, trying to read the terrain and breaking in the trail,” Robert said. “It was a really good day, though. I didn’t get a great jump on the start but I held it longer than anyone else and passed into the lead pretty quick, and from there I was able to lead the rest of the race. I had a lot of fun and I look forward to trying another one!”

It was a solid day for Sutherlin, who finished 2nd overall in his first race back since Round 2, where he claimed the overall win before a series of internal injuries sustained during a practice crash sidelined him for a majority of the race season.

“It’s nice to finally be back to racing,” Sutherlin said. “Congrats to Taylor for pulling off his first win, I reeled him in a few times but with the dust he kept pulling it out to a point where I couldn’t get him. It’s always the goal to be in the center of the podium but we will take this 2nd and keep building.”

Heading into the final loop of the day, Ramirez was in a favorable position to claim a top-five finish but unfortunately the defending champion experienced a big crash that sent him to the ground pretty hard. Ramirez was forced to regroup himself before taking off, which ultimately caused him to lose valuable time in the overall running. Ramirez finished 10th in the Pro Class and 12th overall for the day.