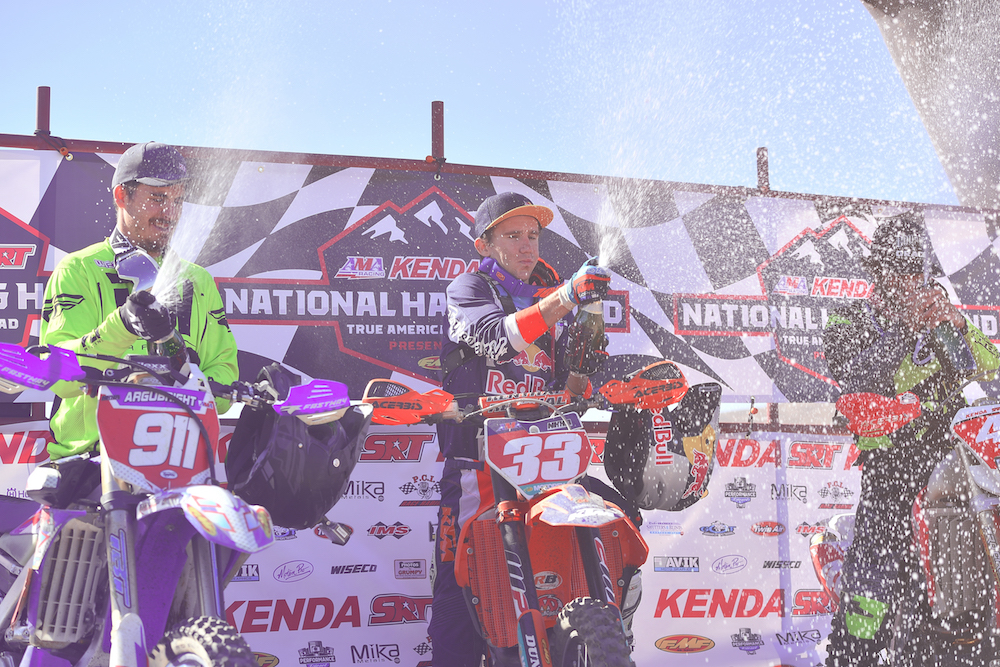 Share FacebookTwitterGoogle+ReddItWhatsAppPinterestEmail
RED MOUNTAIN, Calif. – FMF KTM Factory Racing Team’s Taylor Robert got off to a positive start in the 2018 AMA National Hare and Hound Championship as he claimed victory at Sunday’s season opener in Red Mountain, California.
Robert picked up right where he left off at the end of the 2017 season, earning his second-straight victory in his last two National Hare and Hound showings. And despite undergoing face surgery only two weeks ago due to injuries sustained in a practice crash, Robert showed up for Round 1 prepped and ready to race aboard his KTM 450 XC-F.
The Spangler Hills OHV course presented two loops – 40 miles each – that varied in technicality and each took around one hour for the top riders to complete. Robert had his work cut out for him from the beginning as he made a mental error on the start, which caused him to get off the line last and only 24th by the end of the bomb run.
Fighting the thick dust, Robert climbed his way up to 3rd place as he came through the pits on the first loop. The 2nd place rider, Jacob Argubright, took an extended pit stop, which allowed Robert to overtake the 2nd place position. From there, he immediately set his sights on the leader who was over a minute and a half ahead.
About halfway through the second loop, Robert made his move into the lead position and from there, the Arizona native never looked back. In the end, Robert was able to secure the checkers about 45 seconds ahead of the 2nd place rider to earn the first victory of the season.

Robert: “On the start, it seemed like they fumbled with the banner so half the people fired up their bikes and I just kind of got a little flustered and got on the gas too soon and my bike didn’t fire. I started right behind Kendall and we were so far into the dust right off the start. We just started working our way up but we didn’t make it easy on ourselves. At least half of the first loop was bad, the wind was blowing straight into us and you couldn’t get out of the dust no matter how hard you tried but I was able to eventually put myself up front. I’m happy to come away with the win at Round 1, especially after having surgery two weeks ago to repair my fractured face. They put five plates in there and 10 studs in my mouth so I just tried to make it happen today.”
Argubright- “To start off the season 2nd place on the podium is a great place to be. I’ve worked really hard to prepare for this race and I think it paid off today. My YZ450 FX worked really well today in the California desert. Of course, there is always progress to be made, and I look forward to showcasing my improvements at round two.”
Round 2: February 24 / Ocotillo, California
Overall Pro Class Results
1. Taylor Robert, KTM
2. Jacob Argubright, YAM
3. Kendall Norman, HON
4. Nick Burson, YAM
5. Joe Wasson, BETA
Hare and houndTaylor Robert
Share FacebookTwitterGoogle+ReddItWhatsAppPinterestEmail

JARVIS WINS THE TOUGH ONE