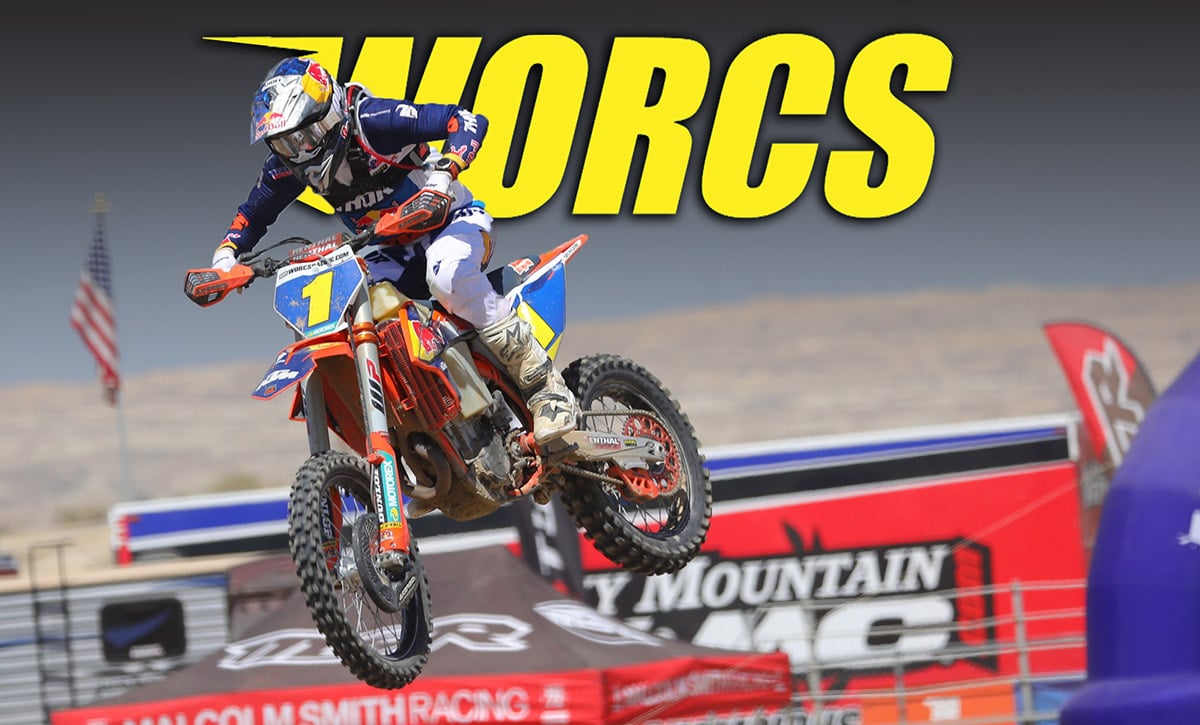 KTM’s Taylor Robert swung back to the top step of the podium with the win in the Pro 450 Motorcycle race in the Rocky Mountain ATV MC WORCS Series Presented by Polaris RZR and Dirt Bike event at Honolulu Hills Raceway. Mateo Oliveira won the Pro 250 race, while motocross racer Ryder Difrancesco finished first in Pro-Am. Brandy Richards remains undefeated in Pro Women with her fourth victory of the season.

The event was held at the combined off road and motocross course at Honolulu Hills. Situated at the edge of the San Joaquin Valley, warm and dry conditions leading up the race made for a challenging course with visibility issues reported late in the two-hour run. In the Pro race, Robert wasted no time getting into the lead on his KTM with the Husqvarna of Austin Walton and the KTM of his teammate Dante Oliveira trailing him. Though Walton made several hard charges on Robert, he held onto the victory, his second of the season. Walton was second, ahead of Oliveira. Cole Martinez on a Honda and Travis Damon on a Yamaha rounded out the top five. Robert is amazed at how competitive the series has become. With significant factory support throughout the field, he said he has to keep his fitness up and his riding has to be spot on every weekend. “The level is so high right now and we have tons of manufacturers putting in support, so the guys are seeing it and they’re picking up the pace,” said Robert. “It’s really cool to see these factories out here and the guys coming up. It’s good to see the sport growing.”

Robert and Oliveira have split victories this season with two apiece. That is making for a serious points battle early in the season, one that is likely to keep going until the season finale in Arizona. “This is going to be an intense battle this year,” said Robert. “Dante and I keep swapping back and forth and these kids are moving. It should be a pretty hectic last race.”

Walton took second for good late in the event and kept Robert in his sights throughout. Though dust made it tough for him to mount a charge, he did keep Robert honest. “I was trying to give Taylor a run for his money, and I always respect racing with him because I know he’ll race me clean,” said Walton. “To try to stay behind Taylor, I had to really trust my lines, and I did everything I could to stay with him.” Oliveira was third and loses the points lead to Robert. He swapped second and third with Austin early in the race before settling into the final spot on the podium for the remainder of the race. “I was charging behind them just a few seconds back,” said Oliveira. “I was feeling good, and I was looking for a place where I could make a pass. I just couldn’t put it together, but my KTM worked awesome, and I just have a few things I want to work on.”

In Pro 250, Mateo Oliveira extended his points lead with his third win of the season on his RPM KTM. The victory didn’t come easy, though, and after taking the lead early in the race Oliveira had to use every bit of his fitness to keep it. Tallon Lafountaine took several shots on Oliveira late in the race and finished second on his Honda. Colton Aeck was third on his 3 Bros KTM.

“I got a decent start, and got the lead fast,” said Mateo Oliveira. “From there I just tried to ride my own race and do everything I could to keep the lead. I saw Tallon coming right before we pitted, and I wasn’t sure I was going to be able to hold him off. But I did it, and I’m just stoked to get the win.”

Lafountaine made it into second early in the race and looked everywhere for a chance to pass for the lead. At the end, with visibility decreasing due to dust, he throttled it back and settled for second, earning his third podium of the season. “I put a good charge on and got pretty close to Mateo,” said Lafountaine. “Once I got close it was hard to mount a charge in the dust. It was hard to see the bumps and there were a lot of square edges out there, so I played it safe at the end.” Aeck learned that WORCS’ longer format worked to his advantage. After hitting a hole and doing on endo early in the race, he recovered to finished third. Limiting this type of mistake is Aeck’s goal this season. “Today I found the only mudhole on the track and flipped trying to make a pass,” said Aeck. “I just need to minimize those mistakes and I think we’ll move up higher on the box. We’re building and that’s all we can ask for.”

In Pro Am, Difrancesco came on hot right from the start, taking the holeshot and he led every subsequent lap in dominating fashion on his Kawasaki. Brandy Richards was second on her KTM, backing up her victory in the last round. Matt Canepa was third on his KTM.

“I think the longest moto I’ve every ridden was an hour and that was only halfway there in this race,” said Difranceso. “The first hour was super fun, and then the track got torn up and powdery. So, I had to slow it down a little bit and I cruised to the finish.” Richards stuck with Difranceso for the first lap before she crashed. She recovered to run second for the rest of the race. “I was second right behind Ryder at the start and I stayed with him for a little bit,” said Richards. “I went down on the first lap so I didn’t see him again. I’m pretty happy with second especially running against Ryder.” Canepa is another motocross convert and he enjoyed the high speed of the Honolulu Hills track. The third-place finish marked his first podium of the season. “The course was rough and it was pretty dusty but I had fun,” said Canepa. “The course was fast and overall, I had fun.” Richards remains unbeaten in Pro Women. She rode her KTM to her fourth consecutive victory ahead of Kaitlyn Jacobs and Eva Silvestri.

THE ADELANTO GP IS BACK