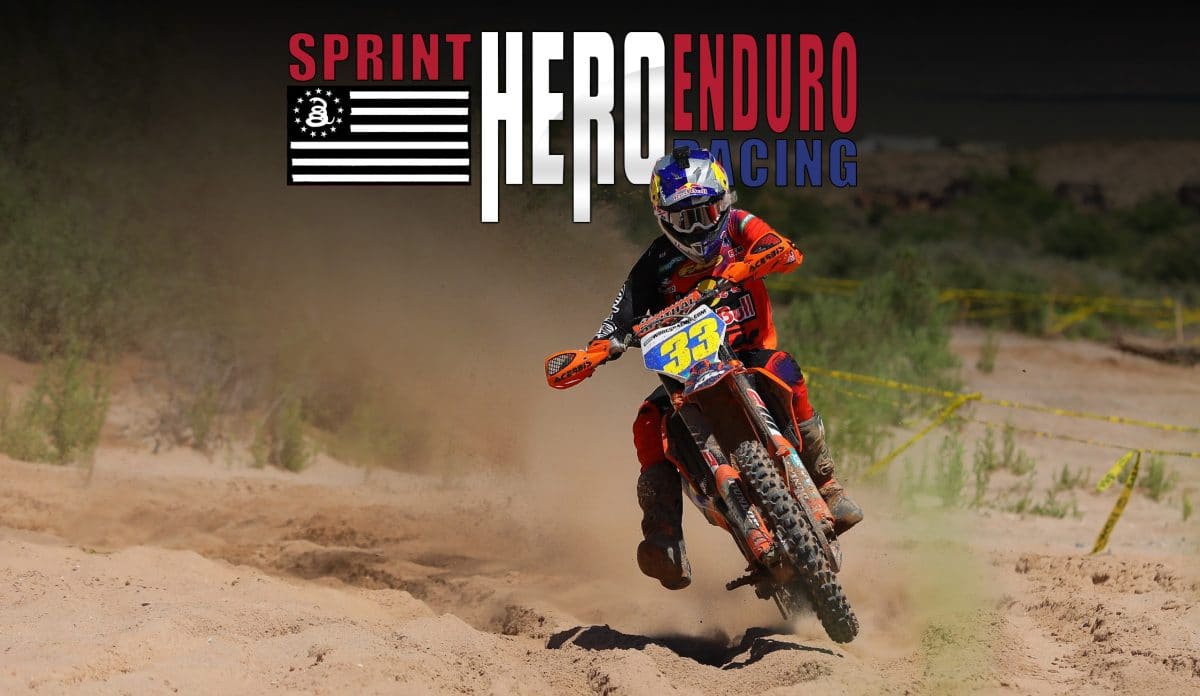 Mesquite, NV – Taylor Robert moved his win streak to three during the AMA Sprint Hero Racing Series event at Mesquite MX. Riding a Red Bull/KTM, Robert held off a charging Zach Bell to give him a perfect score in both WORCS and Sprint Hero competition. Dante Oliveira capitalized on an wrist injury by Gary Sutherlin to snag the last spot on the podium. Sutherlin and Austin Walton completed the top five overall.

As part of its new sanctioning agreement with the AMA, the two-day event was one of three West Coast ISDE qualifiers for riders wishing to represent the United States in Portugal. That changed the format, with the two types of tests—one on the motocross track and one on the off-road section—held in alternating order with six tests each day.

Rain prior to the event washed out some of the motocross track, and standing water forced officials to slightly modify the layout. The rain benefitted the sandy off-road sections, though, making for perfect dirt. Both days featured sunny skies with temperatures in the 80s.

Robert ran away with nearly all of the tests on Saturday, but Bell kept him honest, winning one motocross test on Saturday, and all three on Sunday. A crash by Bell on Saturday, however, handed Robert his third consecutive win. Robert enjoyed the different format as he celebrated yet another victory.

“Alternating back and forth helped keep things fresh and I really liked it this weekend,” said Robert. “The weekend ran super smooth, the track was awesome, and I was stoked. The rain made the off-road section so good. There’s so much sand out there that you really can’t water that stuff enough. It made the motocross track a little sloppy, but it wasn’t anything we couldn’t handle. All in all it was a good weekend.”

Robert thoroughly enjoys the Sprint Hero format. He said he helps keep him fresh on his technical riding, and also gave him a heads up for the upcoming WORCS weekend here. ISDE racers, he said, shouldn’t miss these events because they are a great dress rehearsal for that series’ format.

“I love this style of racing and I hope we can grow and get more people to come out and try it,” said Robert. “It’s such good practice for ISDE because it’s as close as you can get to that technical format.”

Hadn’t it been for his spill on Saturday, Bell and his Kawasaki would have definitely been a bigger challenge for the overall victory. While Robert dominated the first two races, Bell showed that he is coming and Robert had better keep his eyes open.

“I feel like I’ve proven myself, especially this weekend,” said Bell. “On Sunday I definitely kept Taylor honest. The Kawasaki has been really good for me this year. I’ve adapted well and I’m feeling really good on the bike. We’ll just keep building.”

Oliveira and Sutherlin battled it out both days. Sutherlin was in winning form after returning from a foot injury. However, he cased a jump on Sunday on his KTM and that opened it up for Oliveira to take the final spot on the box. Oliveira was also riding a KTM.

“I got off to a slow start on Saturday, but I was able to turn that around on Sunday,” explained Oliveira. “I pushed a little harder and messed with suspension a little bit on Sunday so I got a lot better times and I made it up to the podium. The mud was cool and the dirt was perfect in the off road. It was super rough so that made it really fun. It was a great course.”

In Open A, Austin Walton earned his first victory of the season. Austin Serpa and Cooper Abbott completed the podium.

Robert: “Today was an ISDE qualifier, which was pretty cool for the guys trying to go to ISDE because the conditions were actually pretty similar to what we’ll see in Portugal this year and the format was similar as well. I felt really good all weekend. It was a combination of a sandy enduro loop, with a hard-packed motocross/cross test and both tests were incredibly fun. All-in-all, it was really good to win both days and get my third win in a row in this series. I’m really happy with the way I’m riding and the results and I’m looking forward to two more races before the summer break.”