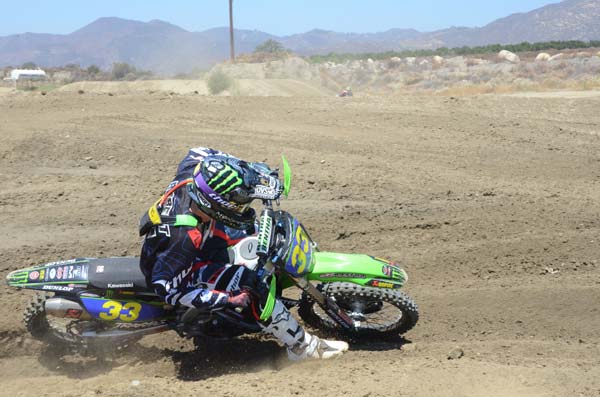 Monster Energy Kawasaki’s TAYLOR ROBERT put together another 1-1 weekend for first overall at WORCS round 8 in Pala California. Robert’s win is his fifth of the WORCS season and sets him more than a full round ahead of Bobby Garrison in the points chase for the title. “I really enjoyed this course,” said Robert. “The MX tracks are all linked together and the off-road section is tough. The other guys didn’t make it easy for me either; Robby Bell gave me a race in both motos. I don’t want to jinx it, but the team has worked hard for the WORCS Championship and we got a little closer today. We’ve just got to finish the season strong.”

ROBBY BELL rode his Kawasaki to a 2-2 score for second overall. In race #2 Bell gave Robert a dogfight for the first hour of the event and even took over the lead for a few laps. But Robert is never easy to beat and after some bobbling by both front runners, Robert came out on top and Bell settled for a well-fought second. “I’m training really hard and I’ve improved my diet and attitude,” said Bell. “It’s paying off and most importantly I’m really having fun racing. Racing is a lot more fun when you finish on the podium. Now I want to win one of these.”

Third place fell to Monster Energy Kawasaki’s BOBBY GARRISON, who is still riding hurt. “I’m racing for the WORCS Championship and I’m still in it,” said Garrison. “My shoulder is a small problem, it doesn’t hurt so much anymore but it goes numb after a while and is hard to hold on.” Garrison held on for third and kept Robert from clinching the title early.

JCR Honda’s COLTON UDALL returned to WORCS racing to get a “training” race in and scored his first ever WORCS podium with a third in Saturday’s race. Udall’s combined performance earned him fourth overall just ahead of RPM/FMF/KTM’s JOSH STRANG in fifth. Zip-Ty Racing’s GARY SUTHERLIN was sixth with RYAN ABBATOYE seventh and JACOB ARGUBRIGHT eighth overall.

With eight rounds down and two still to ride Robert leads the title chase with 356/5 wins with Garrison the only rider with a mathematical chance of catching him with 301/2 wins. In the Pro 2 class, Justin Jones scored his second win of the season ahead of series points leader Ivan Ramirez. Husqvarna’s Cory Graffunder was third.

Larry Roeseler is back on a green wagon, its several years old but he loves it.

Kacy Martinez took another win in the Women’s Pro class.

Josh Strang is still fighting to acclimate himself to the KTM. He struggled all weekend.

BESTDUALSPORTBIKES.COM: MONEY BACK GUARANTEE ON ALL FMF EXHUAST!