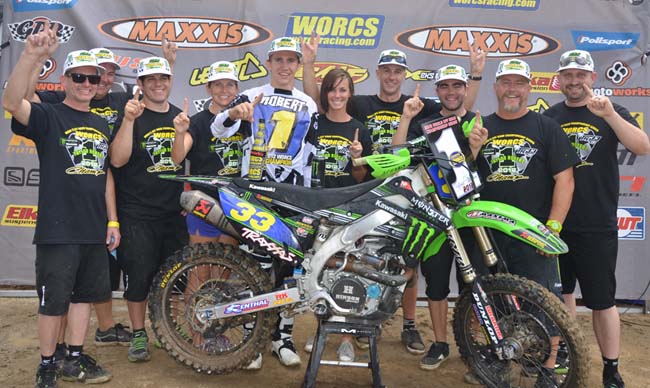 Irvine, Calif. (August 12, 2012) – After nine rounds of the World Off Road Championship Series (WORCS), Monster Energy Kawasaki’s Taylor Robert clinched the 2012 WORCS Championship by sweeping both motos on his KX™450F this weekend at Cahuilla Creek MX in Anza, Calif. Earning his sixth overall win of the season, Robert wrapped up his first Pro class championship over teammate Bobby Garrison with one round remaining.

“It feels incredible,” said Robert. “I’ve worked really hard to get this title, and it means even more because I was so close last year. To win as many races as I have this year, I couldn’t have done it without everyone at Monster Energy Kawasaki. I can’t thank everyone enough.”

With the WORCS championship now secure, Robert will shift his focus to the AMA EnduroCross series with hopes of earning a second number-one plate this season. After three rounds, he sits third in points just 12 points behind the leader. The series resumes September 15, 2012 at Citizen’s Bank Arena in Ontario, Calif.
Share FacebookTwitterGoogle+ReddItWhatsAppPinterestEmail