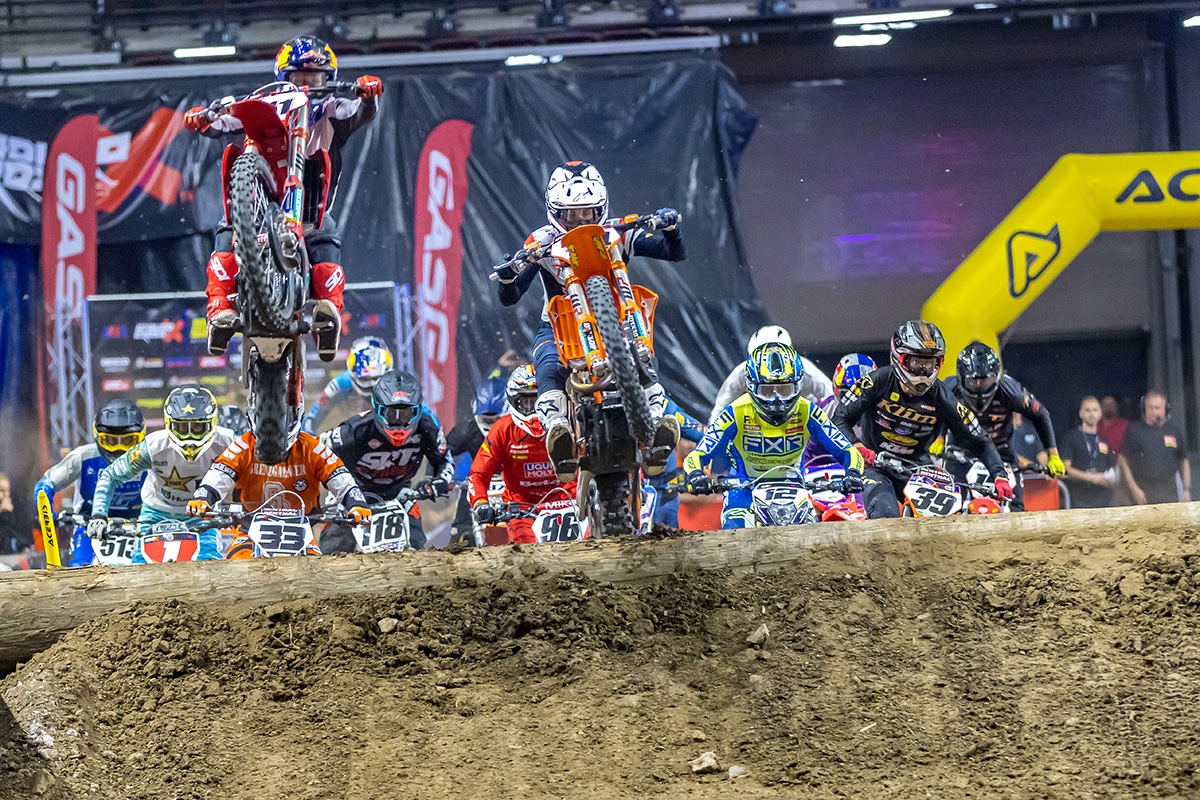 Trystan Hart and Blake Gutzeit round out the podium

The 2022 GEICO AMA EnduroCross Championship Series hosted the first round Salt Lake City, Utah at the Maverik Center. Taddy Blazusiak took the overall win to kick off round one. The GasGas Factory rider had a score of 1-2-1 across the three motos. Red Bull KTM’s Trystan Hart finished second overall with 2-1-2 moto finishes. Rounding out the overall podium was KTM Rider, Blake Gutzeit, with 4-5-5 finishes in the motos.

Blazusiak kicked off his day by setting the fastest hot-lap time to set the starting order for the first of three motos with a time of 35.61. FactoryOne Sherco rider, Cody Webb, had the second-fastest time of 35.64. Webb’s FactoryOne Sherco teammate, Cooper Abbott, had the third fastest hot lap with a 36.34 lap time. Blake Gutzeit set the fourth fastest hot lap with a time of 36.54 and Jonny Walker rounded out the top five with time of 36.62. Rockstar Husqvarna’s Colton Haaker had the slowest hot lap time of 43.34 after going down during the firewood section.

Blazusiak took the Moose Holeshot and an early lead in moto one, ahead of Hart, Webb and Walker. Blazusiak would hold onto the lead for the duration of the race, though Hart was closing the gap lap after lap until a hiccup in the rock garden slowed him down right before the white flag went out. Haaker would also run into some issues himself after starting on the second row due to his crash in his hot lap. A mid-race fall off the rock garden would keep him out of the top five as he finished in sixth place. Hart would stay the course and finish P2 behind Blazusiak and Walker behind Hart in P3.

The second moto inverts the sixteen riders’ finish positions from race one for gate picks, so the top eight riders start on the second row. Nick Thompson shot out of the gate to the holeshot with Abbott and Hart right behind him. A few laps in, Thompson had some trouble climbing the tires and Walker took over the lead with Hart right behind him. Walker led for a few laps before falling victim to the tires as well going down after exiting them. From there Hart took over the lead with Blazusiak not too far behind. Hart would go on to win moto two ahead of Blazusiak in second and Abbott in third.