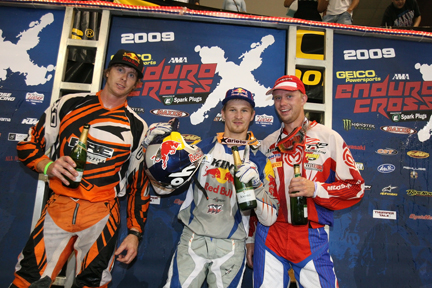 Geoff Aaron and Cory Graffunder join Taddy on the podium

The day started with Taddy Blazusiak setting the fastest lap time during the afternoon qualifying session, which puts the riders on the track by themselves for a single hot lap to determine heat race starting positions.  Mike Brown on the Muscle Milk backed KTM took second followed by Geoff Aaron, Lucas Oil backed Colton Haaker and Cory Graffunder.

After several exciting qualifying races filled the eleven rider main event, it was Aaron that touched the first 35 inch sequoia ahead of the pack to collect the $500 Girardi wealth management holeshot award but he immediately got stock on that same log and was forced to work his way back into a podium position.  Graffunder, the Canadian off-road warrior stayed very close to Blazusiak for the first half of the main and seemed to be faster in some sections and quickly closed in any time Taddy made any kind of bobble. Graffunder ultimately made his own mistake and stalled his bike to allow Aaron past for second.  Monster Energy Kawasaki’s Damon Huffman worked his way into forth position after a tough first lap that found him near the back of the pack.  Colton Haaker rounded out the top five.

Shane Watts, the former GNCC champion made a valiant effort to at EnduroCross but ultimately missed making the main while Ricky Dietrich, the 2009 EnduroCross champion sat out this event to allow his broken foot to recover.

Columbus, Ohio will host round four of the 2009 GEICO EnduroCross series on Saturday, October 3rd.  Tickets are available at www.endurocross.com.