A new face with a familiar heart 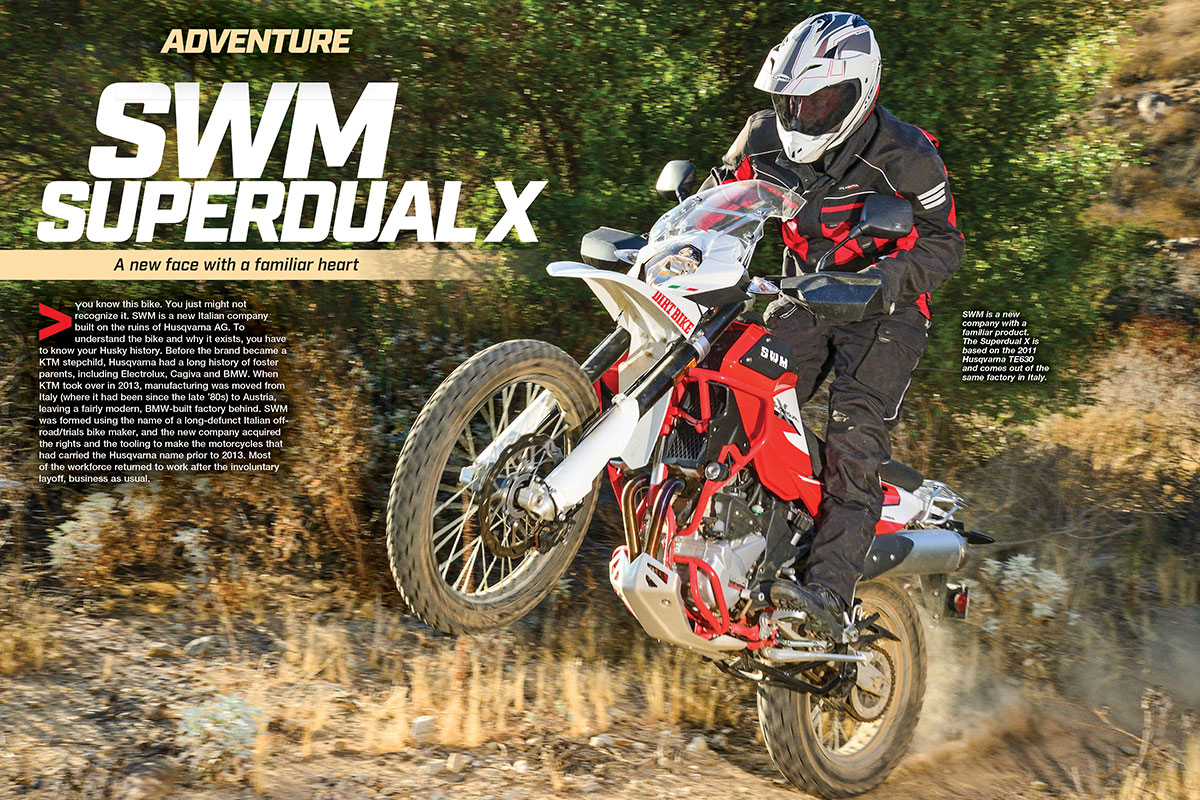 You know this bike. You just might not recognize it. SWM is a new Italian company built on the ruins of Husqvarna AG. To understand the bike and why it exists, you have to know your Husky history. Before the brand became a KTM stepchild, Husqvarna had a long history of foster parents, including Electrolux, Cagiva and BMW. When KTM took over in 2013, manufacturing was moved from Italy (where it had been since the late ’80s) to Austria, leaving a fairly modern, BMW-built factory behind. SWM was formed using the name of a long-defunct Italian off-road/trials bike maker, and the new company acquired the rights and the tooling to make the motorcycles that had carried the Husqvarna name prior to 2013. Most of the workforce returned to work after the involuntary layoff, business as usual.

The Superdual X is based on the 2011 Husqvarna TE630. That bike, in turn, was an evolution of one of the longest-running platforms in the history of off-road motorcycles. It can be traced back to the very first Husqvarna four-stroke of 1984. That bike was originally an air-cooled twin shocker, but it quickly morphed into the 1986 liquid-cooled single-shocker. This was a game-changing bike that proved that four-strokes could be competitive with two-strokes. That might seem odd by today’s thinking, but in the ’80s, it was the start of a revolution. If you know where to look, you can see many of those same design elements still being used.

THE MAKINGS OF ADVENTURE
The Superdual X is designed to be a lightweight adventure bike rather than an overbuilt dual-sport bike like the Husqvarna TE630. The hard parts of the motor are essentially the same as they were in 2011. By then, the motor had become a 600cc, double-overhead-cam six-speed with electric start and a modern wet-sump oil circulation system. SWM gave it a new Mikuni fuel-injection system and then went to work on the chassis to give it better adventure credentials. The frame itself is still the central backbone configuration that Husqvarna used back in the ’80s, but the Superdual got a larger fuel tank (4.8 gallons), a Sachs rear shock, anti-lock brakes, a windscreen, a luggage rack, a center stand, running lights and crash bars. The model for the new bike was clearly the Kawasaki KLR650, which went out of production last year. That left a huge void in the U.S. market, and budget adventure riders have been in mourning ever since.

The key to the KLR’s success was, of course, its price. In its final year  it carried an MSRP of $6699. Kawasaki had long since transplanted the KLR’s tooling and manufacturing to Southeast Asia in order to keep the price down, but it was still a carbureted big single, and its time ran out. SWM couldn’t match the KLR’s price. No modern, fuel-injected bike could, especially not one from a European country. But, the Superdual is still a bargain at $8995, which, interestingly enough, is just a little less expensive than the 2011 TE630, despite all the upgrades.

Another factor to consider is the quality of the components used by SWM. It has a hydraulic clutch, an oversized aluminum handlebar, Brembo brakes and Metzeler tires. The fork is made by a company called Fastace, but the quality seems surprisingly good. When you throw in the fact that SWM got the bike through the U.S. government’s convoluted approval process without resorting to throttle stops or pea-shooter baffles, the price is downright amazing.

A CLASS OF ITS OWN
There’s nothing quite like the Superdual on the U.S. market. It’s far more powerful than the Honda XR650L and the Suzuki DR650. It falls a little short of the stripped-down KTM 690 Enduro and the Husqvarna 701 Enduro in outright acceleration. In terms of horsepower, it’s more comparable to the street-oriented twins, such as the Suzuki V-Strom 650 and the Kawasaki Versys.

There’s no doubt, however, that the SWM is a big single with a strong dirt bike heritage. It has instant rumbling torque starting from the very bottom. This isn’t a seamlessly smooth street bike; it shakes and throbs. You can’t really say it vibrates; it’s more of a pulse. The low-end power goes a little flat as the revs start to climb, then there’s a second big burst of power that’s pretty impressive all the way up to a peak of around 56 horsepower. Interestingly, the faster you go, the smoother the motor gets. At freeway speed, all that shaking goes away and you have a smooth, comfortable ride with fairly good wind protection. Even at higher speeds, the bike has decent roll-on acceleration, so you can twist the throttle and instantly get around cars and buses.

The SWM really shines in the dirt. What we like most is the fact that it handles more like a dual-sport bike than an adventure bike. You can actually sit down in turns and put your foot out. That’s the ultimate no-no on bigger bikes like the Africa Twin and even the highly acclaimed KTM 790 Adventure. Those bikes are designed to be ridden standing up. If you sit, your weight is too far back to turn effectively. The SWM’s seat is farther forward, so it feels perfectly natural to ride dirt bike style. At higher speeds, however, standing up is still the way to go. It feels natural, and the bike responds well.
As with any dual-sport or adventure bike, the stock suspension setup is very middle-of-the-road, but the Fastace fork and Sachs shock are well-balanced and are a good match for the bike’s intended purpose. The SWM is soft when you get into rough off-road conditions, and the front end will dive under really hard braking, but if you’re riding the bike that hard and fast, you’re probably exceeding the design limits of any adventure bike. The fact that the SWM is a good 100 pounds lighter than other bikes designed for the same purpose gives you confidence, and frankly it’s easy to run away from the big bikes in rough stuff.

SWM says that the anti-lock braking was designed for off-road riding, although it’s typical of most systems and not especially effective for aggressive riding. The chatter is annoying and prevents you from using the rear brake for steering. Before riding in the dirt, we generally disabled ABS by putting the bike on the center stand and letting the rear wheel spin briefly. A light on the instrument panel tells you that the system is off, but when you take a break, the anti-lock resets itself.

TRAVEL COMPANION
We love the fact that the people who designed this bike are real riders. That’s obvious from the parts they included and the way things are laid out. The Superdual X has both a center stand and a side stand. You need both, so thank you. The luggage rack is big enough to be useful, but not so intrusive that it hits you in the butt when the bike pitches in whoops. And the seat is excellent—probably better than anything BMW or KTM has ever put on an adventure bike. SWM also offers a number of accessories, including Givi aluminum saddlebags.
The complaint list is short. In tight, slow-speed terrain, it can stall occasionally. The tires are a little too street-oriented for our tastes, and the shape of the tank can interfere with your knees when you stand. Those are all minor in the big picture when you consider how much value the Superdual offers. SWM isn’t a well-known brand in the U.S. and they know it. That’s why the price is low. The Superdual X offers the quality and engineering of a mainstream European motorcycle for the price of an Asian knockoff. That’s a rare combination, and it probably won’t last forever.