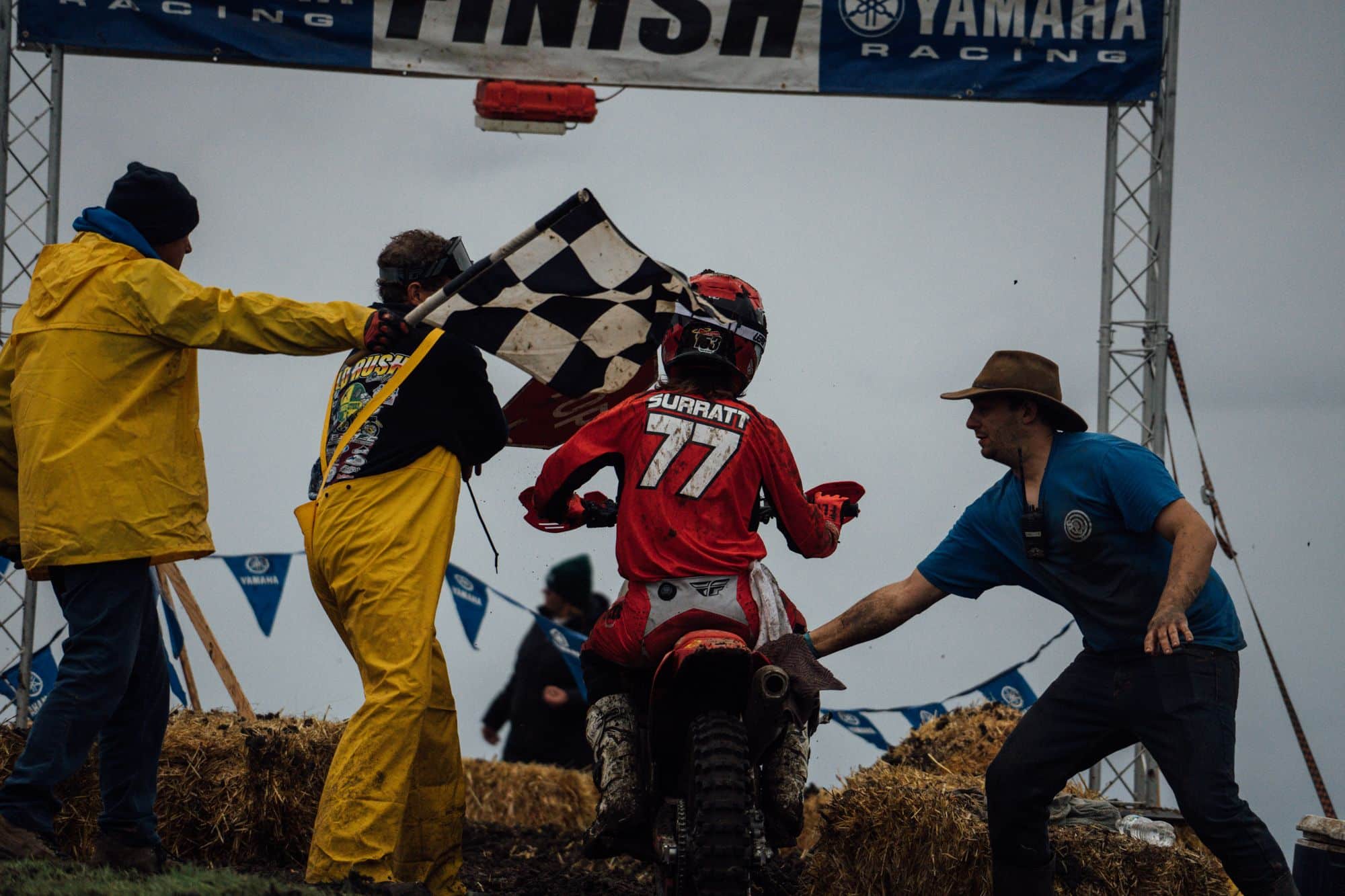 The 2023 NGPC race series kicked off the opening round of its ten-round series in Delano, California, at the beautiful natural terrain grass track, American MX. The SoCal MC club hosted the round on a six-mile grass track motocross racers only dream of racing. With virtually no jumps, off-camber turns, and some of California’s best soil, it’s  a dream come true. With the recent California storms, the track was shaping up perfectly during Friday’s practice. The only problem was that rain forecasted another shower for the weekend, bringing some of the worst track conditions for Saturday’s and most of Sunday’s racing. As the rain fell most of Saturday, the track went from ultimate traction to grease, and racers prepared the best they could, which made for the best racing in quite some time.

Mateo Oliveira and his Red Bull/KTM snagged the first holeshot of the year, showing his older brother and competitors that he will be a force to be reckoned with throughout the year. Unfortunately, his start was quickly gobbled up by Purvines Racing’s recruit, Justin Hoeft. Hoeft quickly found his way to the front and sprinted away, bringing the JCR/ Honda racer Ryan Surratt and Red Bull/KTM’s Dante Oliveira with him. The Yamaha racer led the first four laps of the race before strategy started to play its game. The JCR Honda team took the first crack at the Yamaha and KTM team by pitting Surratt earlier, but quick enough to keep him on the lead pace and just behind Oliveira. Then, as both the KTM and Yamaha pitted, the JCR/Honda of Surratt moved to the lead. In doing so, Factory Beta’s Dare Demartile also had made his way up from eighth on the opening laps and pushed himself into second overall.

At the halfway point, the top seven riders were all within a minute of each other, making for the tightest racing we’ve seen in quite some time.  Surratt commanded the lead at the front, with Demartile now in tow. Hoeft and Dante Oliveira found themselves fighting for the last spot on the podium. Coming into the pit area with Oliveira leading Hoeft, the two began to throttle down the back straight, neither letting off into a chicane of hay bales. The two locked handlebars, almost both falling before Oliveira was catapulted off his bike and flipped into the hay bales. Hoeft held his position while the reigning champion lost several.

With the white flag coming out, Surratt still held the lead with an ever-closing gap to the Beta rider of Demartile. The JCR rider only had one problem standing in his way: one more stop for fuel. With only ten seconds to spare, the JCR crew had to make a perfect fuel stop to ensure their rider could hold the lead. As Surratt pulled into fuel, mechanic Gage Day and Johnny Campbell executed a quick eight-second pit that almost saw them hand the race to  Demartile. Unfortunately, Surratt took off a bit early while fueling with the dry break still intact and saw almost half a gallon of fuel splash out over Surratt. Nevertheless, Surratt barely held the lead.

The JCR/Honda racer grabbed the checkered flag by a mere two seconds to the Factory Beta rider, making it Surratt’s first NGPC Pro victory and he will control the points lead into round two. Red/Bull KTM’s Dante Oliveira fell back to seventh after his rodeo stunt with Hoeft before setting blistering lap times that saw him crawl back to the podium, nailing the final podium spot. SLR Honda’s Cole Martinez finished in a solid fourth, with Mateo Oliveira rounding out the top five.

The Pro 250 class wasn’t as exciting to watch as the new Purvines Yamaha racer of Jack Simpson waxed the rest of the field. Simpson moved from Australia last year to fulfill his dream to race in America. The Australian racer showed promise, with the SLR/Honda group finishing in second most of the races to Mateo Oliveira. Simpson found a new home with Purvines Racing and delivered the team a race win in their first go. The Yamaha racer never saw his competition as he nailed the holeshot and never looked back, finishing ninth overall and FIVE minutes ahead of second place racer Gus Riordan.

The RPM/KTM racer needed to be closer to strike his fellow Australian but held a consistent pace that saw him open up a five-minute cushion. Then, with two laps to go, Riardon started to experience what looked to be an air filter problem that saw the RPM camp scrambling to keep Riordan on the course. After four minutes of finally resolving the issue, he pulled back onto the race course and right in front of the third and fourth-place riders of Kai Aiello and Collier Martinez, both in a battle of their own. The three racers went into a full two-lap sprint, which saw Riordan besting both Aiello and Martinez and holding onto the final podium spots. Rounding out the top five was Cody Simpson, who rode to a solid fifth place.

Brandy Richards picked up right where she left off only a few weeks ago by grabbing the lead quickly and never turning back. Richards and her KTM opened up a one-minute lead on the first lap, which progressively increased to five minutes near the end. Gas-Gas racer Ava Silvestri and RPM/KTM’s Kaitlyn Jacobs had a short battle; Silvestri found her way around Jacobs and rode mostly by herself for the remainder of the race. Mikayla Nielsen had an opening lap crash that saw her near the back of the pack on the opening laps. However, she found her groove and made her way past Jacobs for the final spot on the podium for her pro debut in the series.

The series’ second round will be held in just two weeks in Taft, California. The Dirt Diggers MC (South) will have their traditional race at the Honolulu Hills Motocross track, and all can hope for drier conditions. For results and more about NGPC, click the link below! Also, grab a listen to the post-racer interviews below!