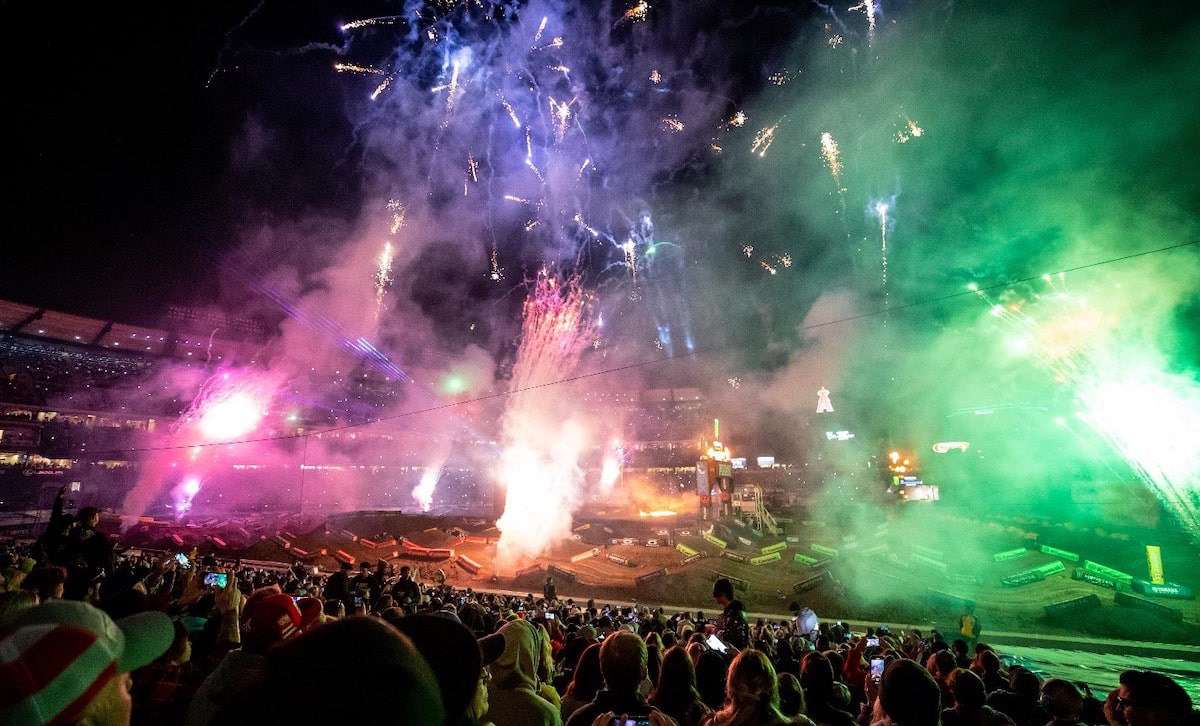 The key players in the U.S. pro motocross world have announced an alliance to form a World Supermotocross Championship, independent of the FIM. Earlier this year, SX Global announced that it would form a short FIM Supercross series after this year’s U.S. outdoor MX series ended. Conjecture is that this series would eventually grow to compete with the Lucas Oil Pro Motocross Series for U.S. talent. Feld Motorsport, promoters of the Monster Energy Supercross series, and MX Sports, which organizes the Lucas Oil Pro Motocross series, have now formed their own world championship series. The official announcement appears below.

MX Sports Pro Racing and Feld Motor Sports, Inc. jointly announced a partnership that will see the formation of the SuperMotocross World Championship. Under this new alliance, the two companies will work together to grow both, Supercross and Motocross, creating a new championship platform that will reward the sport’s best athletes with a $10 million purse – the richest offering in either sports’ history.

Starting in 2023, the professional racing season will expand and culminate with the SuperMotocross World Championship on Saturday, October 14, at the Los Angeles Memorial Coliseum in Los Angeles, California.

“With the creation of the SuperMotocross World Championship, we are taking a significant step towards growing the sport into a series that will be better suited for the expanding global marketplace and its impact on our fans and sponsors,” said Kenneth Feld, Chair and CEO of Feld Entertainment, Inc. “As media and technology continue to evolve, SuperMotocross will be able to capitalize on these innovations to reach new audiences and grow exponentially in the coming years.”

“We are celebrating 50 years of American Motocross this season and the creation of the SuperMotocross World Championship and working in unison with Supercross may be one of the most significant changes the sport has ever undertaken,” said Carrie Coombs-Russell, Chief Executive Officer, MX Sports Pro Racing. “This collaboration will create the only off-road racing series on the planet that provides a fully supported infrastructure, from amateur development to the professional ranks for global competitors to race on the world’s most challenging and demanding tracks.” 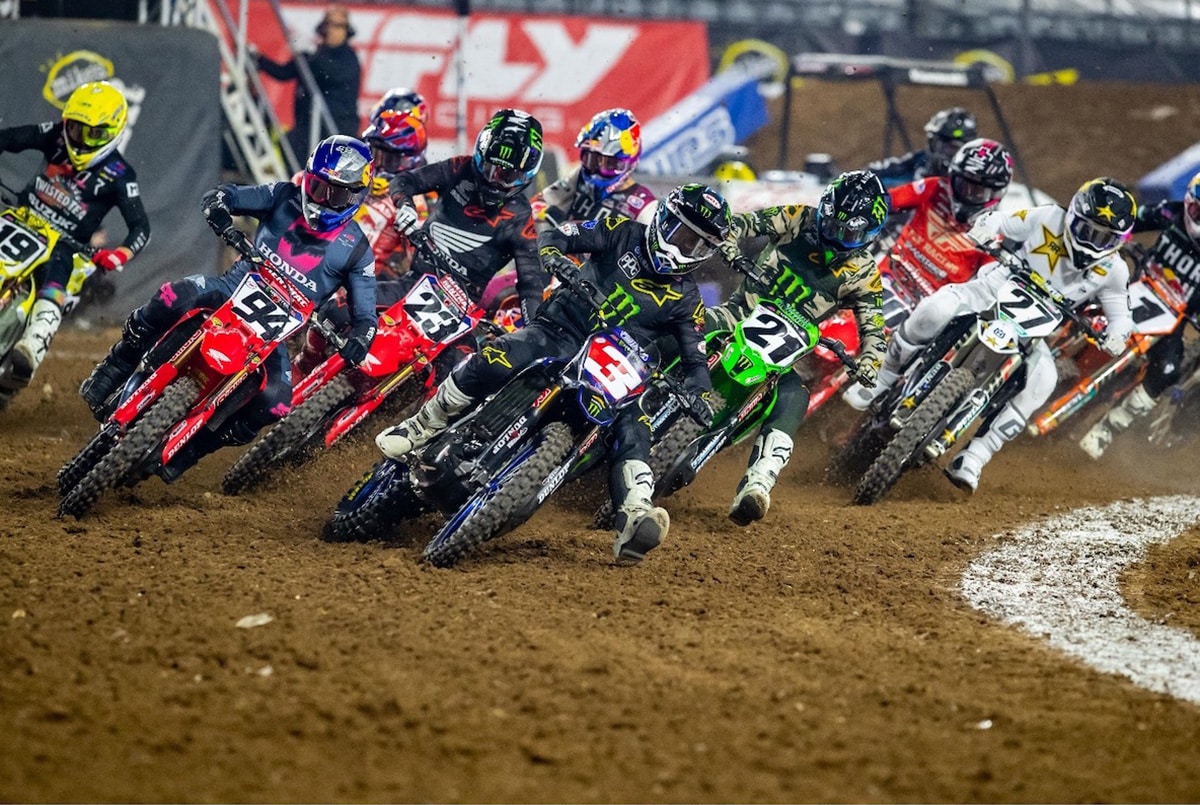 Reigning Monster Energy AMA Supercross Champion Eli Tomac (3) leading a star-studded field into the first turn at State Farm Stadium in Glendale, Arizona. Photo: Feld Motor Sports
All seven of the primary original equipment manufacturers (OEMs) – KTM, Husqvarna, GASGAS, Kawasaki, Honda, Yamaha, and Suzuki – are excited about this new partnership and are fully committed to competing with their race teams. Factory-supported racing efforts have been the backbone of professional racing in the United States for more than five decades. Their commitment ensures that the highest level of racing competition will continue in Supercross, Pro Motocross and throughout the SuperMotocross Playoffs and World Championship.

“The creation of the SuperMotocross World Championship is the biggest and most positive step to ever happen in our sport,” said Roger De Coster – Director of Motorsports, KTM Group North America. “Supercross and Motocross racing in the U.S. is very strong right now and this investment from Feld Motor Sports and MX Sports Pro Racing will bring the next generation of fans to motorcycling.”

“The SuperMotocross World Championship is an important and necessary step forward for our sport,” stated Chris Brull, Kawasaki Vice President of Marketing and Racing. “The collaboration between Feld Motor Sports and MX Sports Pro Racing further strengthens Kawasaki’s commitment to this new world championship and to the already well-established and successful Supercross and Motocross championships.”

The SuperMotocross World Championship will combine both disciplines of Supercross and Pro Motocross, introducing a unique and distinct form of racing called SuperMotocross, hence becoming a new discipline for the sport. Custom-designed tracks will be built to showcase this new style of racing. World-class venues will allow room to integrate the best track designs from Supercross, Pro Motocross and now SuperMotocross, finally providing a stage where the sport’s ultimate debate can be decided – who is the best in the world and ultimately crowning a new overall champion.

“As a manufacturer, it’s great to see two of our valued partners collaborating to bring something new to our sport,” said Brandon Wilson, Manager of Racing and Experiential Marketing, Honda Powersports & Products. “Considering that this has been in the works for more than two years, we are excited to now finally be able to share this significant news. The SuperMotocross World Championship is going to add a lot of intrigue for everyone. Fans will have more opportunities to see their favorite riders and the most competitive racing, plus we’ll now see who the best overall rider is.”

“As the current and reigning champion in both Supercross and Motocross, we’re extremely proud to have earned those titles battling the best competition on the planet,” said Derek Brooks, Yamaha Motorcycle Product Line Manager. “The SuperMotocross World Championship is a unique, yet also natural next step for the sport as we work together to highlight the immense talent of the athletes who compete on our class-leading product.”

MX Sports Pro Racing and Feld Motor Sports have worked together previously on industry related initiatives, none more significant than joining forces in the early days of the pandemic to save motorcycle racing in the United States. Both companies will continue to work together in a collaborative effort to continue growing the sport both domestically and abroad. Bringing together the leadership experience of both organizations and creating a unified rule book will ensure consistency across the series for both athletes and teams. Their combined marketing and operational expertise will strengthen and grow fan engagement through integrated media, promotional, sponsorship and activation programming across the racing season.