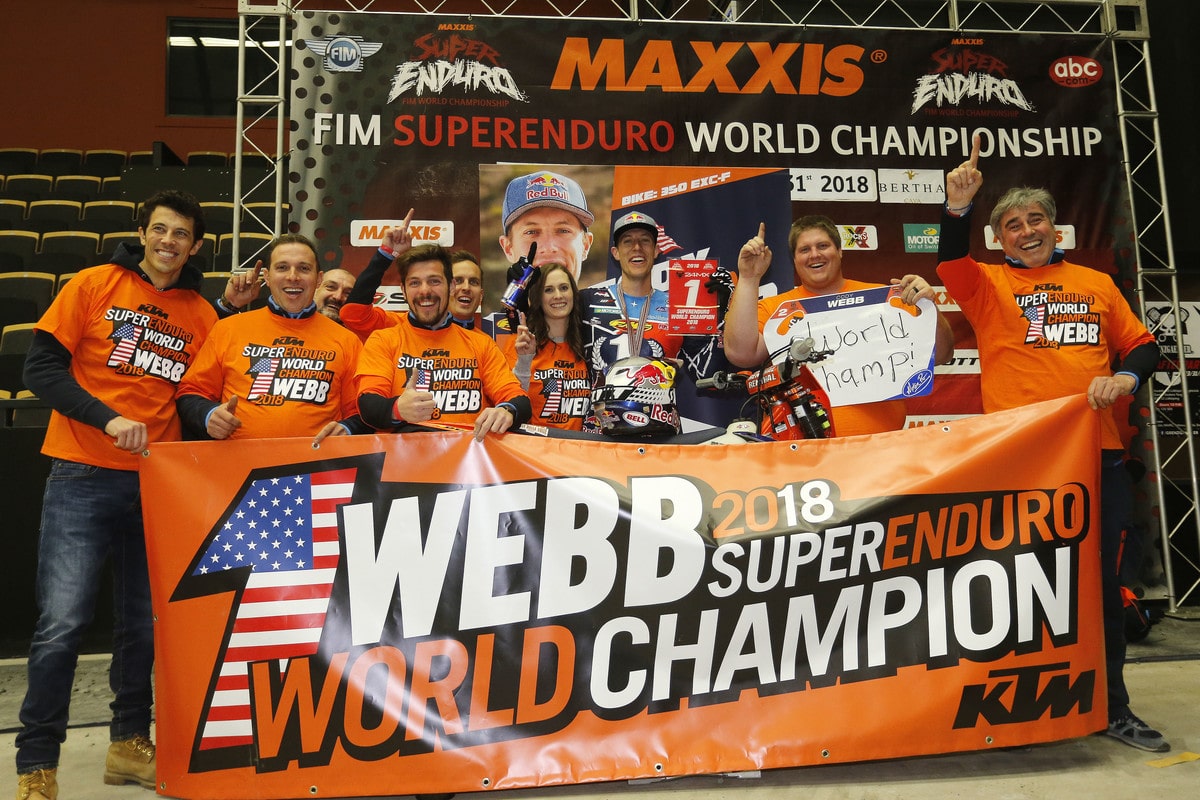 FMF KTM Factory Racing’s Cody Webb has won the 2018 FIM SuperEnduro World Championship. In an action-packed final round in Sweden, Webb’s fifth place overall result was enough to clinch his first ever world title. Husqvarna’s young se3nsation Billy Bolt was the winner with Jonny Walker second.
The four previous rounds of the 2018 SuperEnduro Championship have all delivered exciting, close racing and the final held at the Sparbanken Arena in Lidköping, Sweden was no different. Coming into the fifth and final round with a 17-point advantage over team-mate Blazusiak, Cody Webb had the championship in his sights.
The tight and technical Swedish circuit proved tricky even for the top-class field. But it was Taddy Blazusiak who tamed it best on the Akrapovic SuperPole lap, posting the fastest time ahead of team-mates Jonny Walker and Cody Webb. In race one it was Taddy who excelled again, controlling the race from the front. Behind him, mistakes by Webb and Walker cost them valuable time, relegating the pair to fourth and fifth respectively.
The reverse-grid of race two threw up its usual surprises with KTM mounted Manni Lettenbichler taking the early lead. Taddy and Bolt fought to the front before an unfortunate technical issue forced Blazusiak retire. Webb completed the race in third behind Bolt and Lettenbichler and , giving the American enough points to claim the World Championship title.

With the title decided, race three would determine the further championship placings. Blazusiak again got off to a good start, chasing down Billy Bolt but eventually settled for the runner-up position. Jonny Walker rode an excellent race finishing third, enough to give the Brit second overall on the night.
Adding the FIM SuperEnduro World Championship to his 2017 AMA Endurocross title, Cody Webb is undisputedly the man to beat in indoor enduro. Despite a tough final round, the American was overjoyed with his first ever World title. 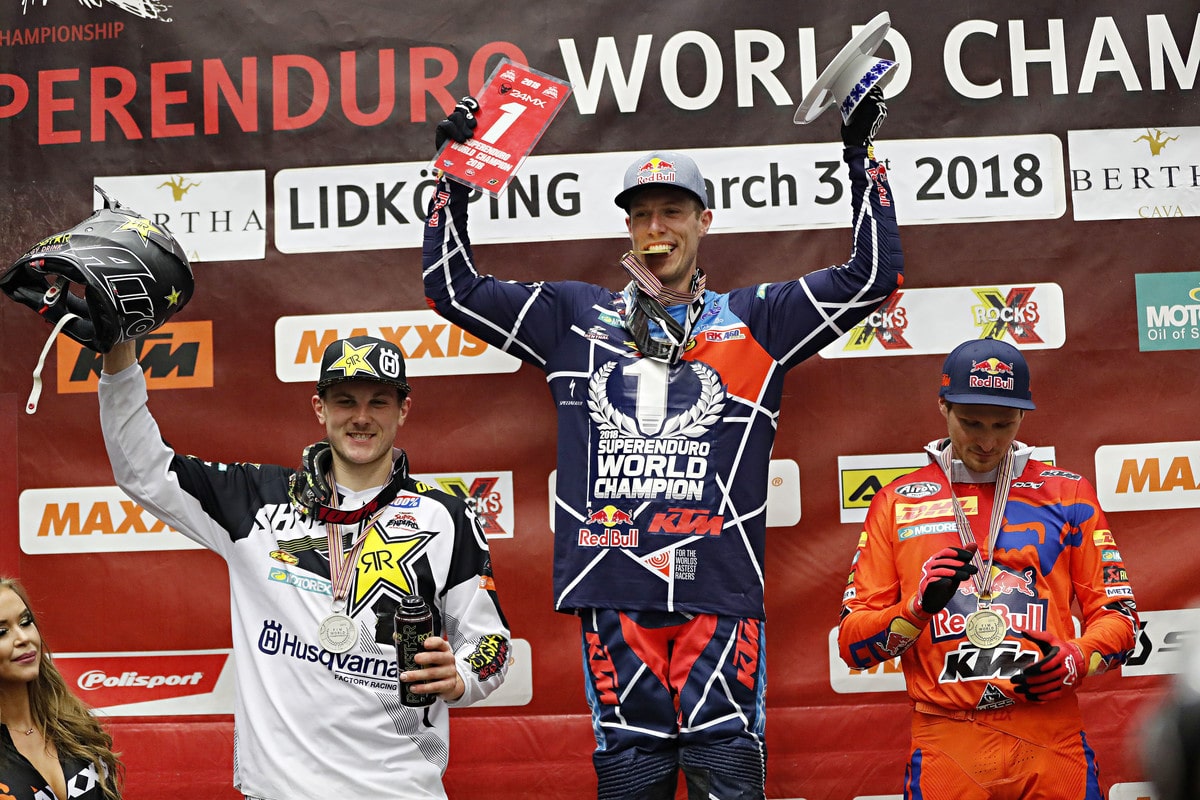 Cody Webb: “I am so happy, I can’t tell you what this means to me. Of course, I feel bad for Taddy, he was riding really well tonight. The championship has been great and for it to come down to the wire shows how high the quality really is – I have so much respect for every single rider in this series. I was riding really tight tonight – I think because of my nerves – and Taddy was pushing so hard. He had some bad luck tonight, but I’ve had a couple of bad rounds too. After having a year out of racing in Europe, to come back and be World Champion is amazing – this is definitely the most important title I have won so far. After my riding tonight, I know there are still some things I have to work on so I’ll go away now, regroup and prepare for the WESS this summer.”

Taddy Blazusiak: “I am so disappointed. Words can’t describe how I feel right now. On the positive side, I know I was fast tonight, I was riding really well. I was feeling good on the bike, practice and SuperPole went well and then in the first race, I was able to set a good, fast pace at the front. Going into the second race, I was only eight points down on Cody in the championship and I knew he had made a couple of mistakes in the first race. To be forced to retire like that is bad at any time, but to lose the championship like that is heart-breaking. I got back for the third race, but my heart wasn’t quite in it. To come back to racing and be so close to taking another world title is definitely encouraging though. I think my pace towards the end of the season was the best. I might have missed out this time, but I’ll be back next year to take my seventh championship.”

Billy Bolt: “It’s been the perfect end to the series — winning my first round overall and then ending the championship as runner-up. I couldn’t ask for more than that, especially in my rookie season. Tonight was a great night and I felt my riding really came together to take the overall victory. We’ve worked tirelessly as a team to improve little by little and the end result has paid off with the top step of the podium here in Sweden. My speed wasn’t any better or worse than previous rounds, but my mistakes were fewer and that’s made the difference. I felt much more consistent in my riding and was able to handle the intensity better, taking two race wins tonight. Regards the final championship standings it was a shame for Taddy Blazusiak to have an issue like he did and it definitely swayed the end result in my favour, but I guess that’s the luck of racing sometimes. Finally, I just wanted to say a huge thanks to the Rockstar Energy Husqvarna Factory Racing team for their support and belief in me to get this result.”

Colton Haaker: “Overall, it’s just been a strange season for me in SuperEnduro. Finishing sixth overall tonight and fifth in the final standings is not the results I wanted to end my second consecutive title defence on. I need to take stock of how things went this season, of course they weren’t what I wanted but I need to look at why. Definitely starting the season coming off an injury wasn’t ideal but I don’t want to use that as an excuse. At every round I felt fast and my lap times were always strong. But through a combination of bad luck and situations out of my control, the results weren’t there to put together an overall result that I know I’m capable of.”