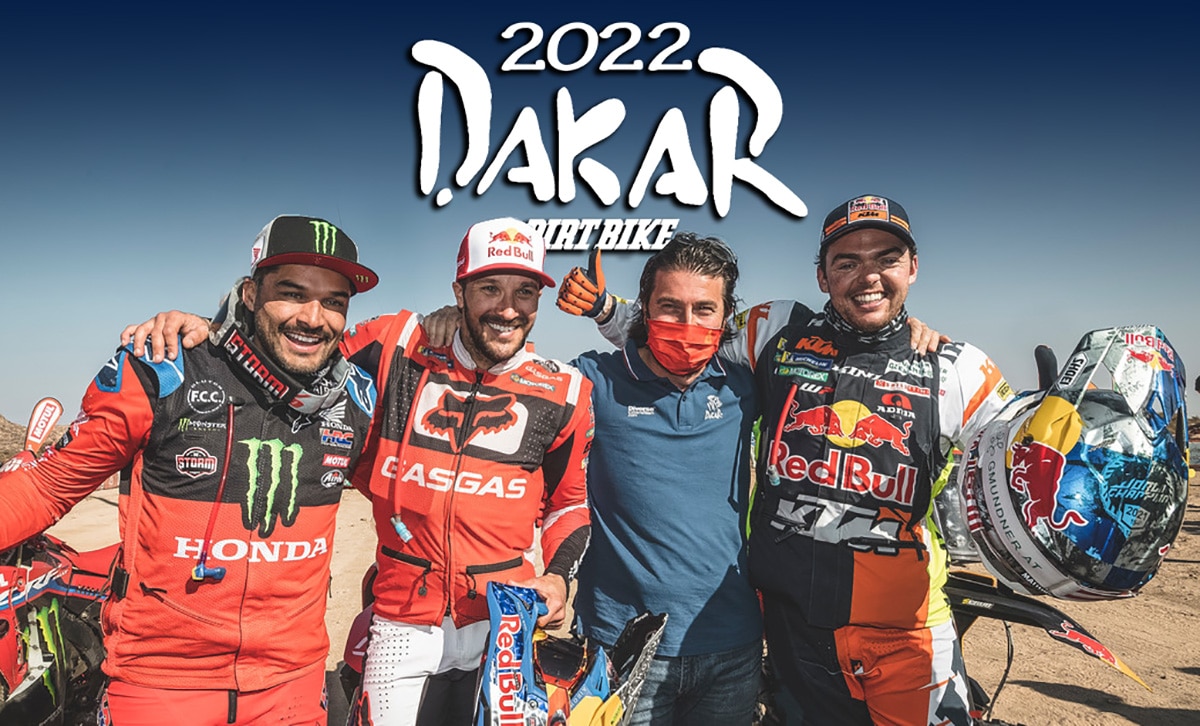 Sam Sunderland has won the 2022 Dakar Rally for GasGas. It was one of the closest finishes in years, with Honda’s Pablo Quintanilla winning the 12th and final stage to close with a few minutes of taking the overall. In the end, Sunderland’s 8th-place finish was enough to hold on to the lead. 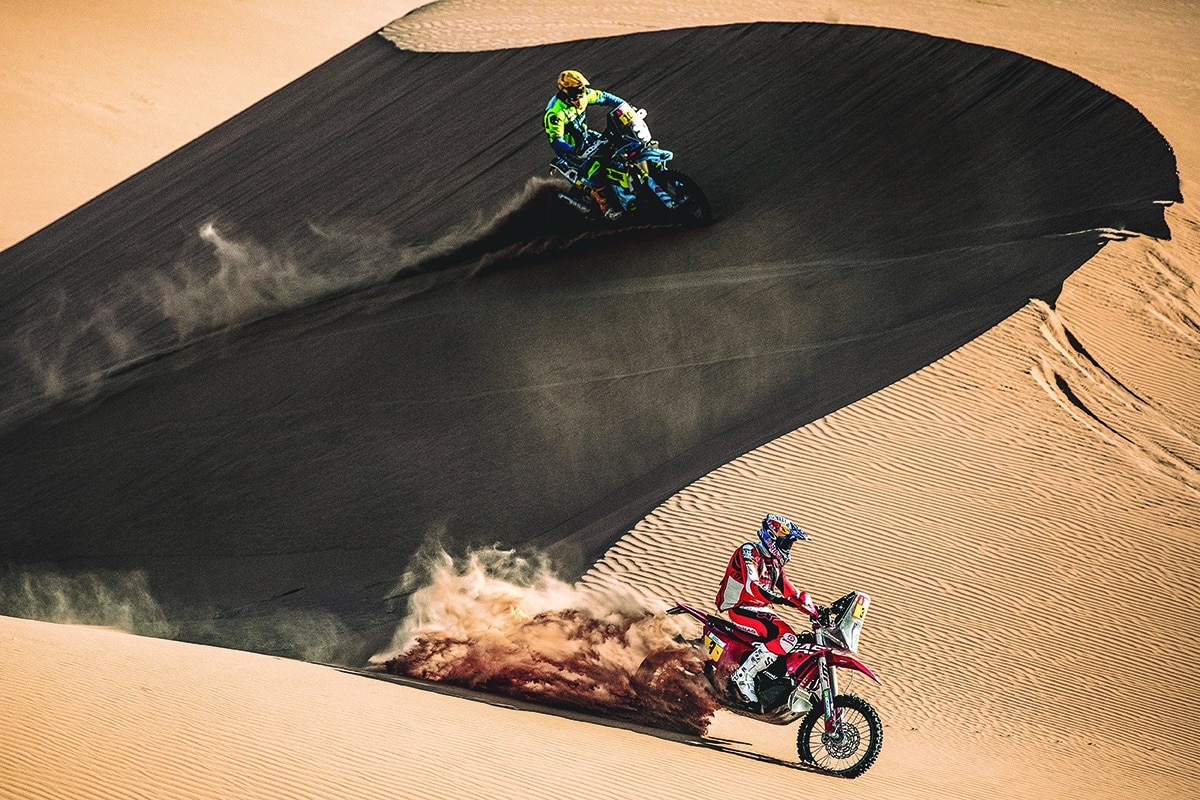 Sam Sunderland: “Wow. What a feeling! That 10-minute period waiting at the end of the final stage to see if I’d won felt like a lifetime. But this feeling, knowing I’ve won a second Dakar, will stay in my memory forever. This win feels better than the first as this victory was anything but easy. The times were so close this year and there was no time to let off the gas, it was a really close race, right to the end. All of the hard work, the sacrifices, and everything that the GASGAS team has done for me makes it all worthwhile. It’s been five years since my first Dakar win, and it’s been a long time to wait! I’m super happy to get another win and claim the first one for GASGAS. Everyone on the team has worked so hard to achieve this and it’s a true team effort – together we got the job done. Amazing.”

With Mathias Walkner’s 7th place finish today, he consolidated third place on the podium. Ricky Brabec finished seventh overall and was the best placing American. That would be an amazing performance for anyone else, but Ricky was disappointed. He lost 1 hour, 16 minutes on the very first stage and spent the rest of the rally catching up. He succeeded, for the most part, clawing back almost half of that deficit. On the final stage, he rode well, but sustained a 12-minute penalty, placing him all the way back in 21st. “Super happy to make it to the finish of this year’s Dakar. Had a bunch of things I personally stumbled on both weeks and made it difficult to pick up the pieces but happy to be healthy, heading home and already looking forward to the next one. Thanks to the team for all the hard works and finishing in the podium. The Dakar is gnarly and so much goes on with so many moving people, parts, and pieces to make this work.”

Andrew Short rode a clean race to finish right behind Brabec in eighth overall and 13th on the final stage. “I’m so happy to have reached the finish line. The Dakar is such a crazy race that finishing is a great achievement in itself. The final stage was pretty cool, a bit tight a twisty with some nice terrain. Before the rally I hoped to finish higher and it wasn’t through lack of effort or anything – it was solely down to the issue I had on stage one. I did the best I could after that but that’s just how rally is sometimes. The team have been amazing. They built a great bike for me, which didn’t miss a beat all race and I’m happy that we had two guys in the top 10.”. 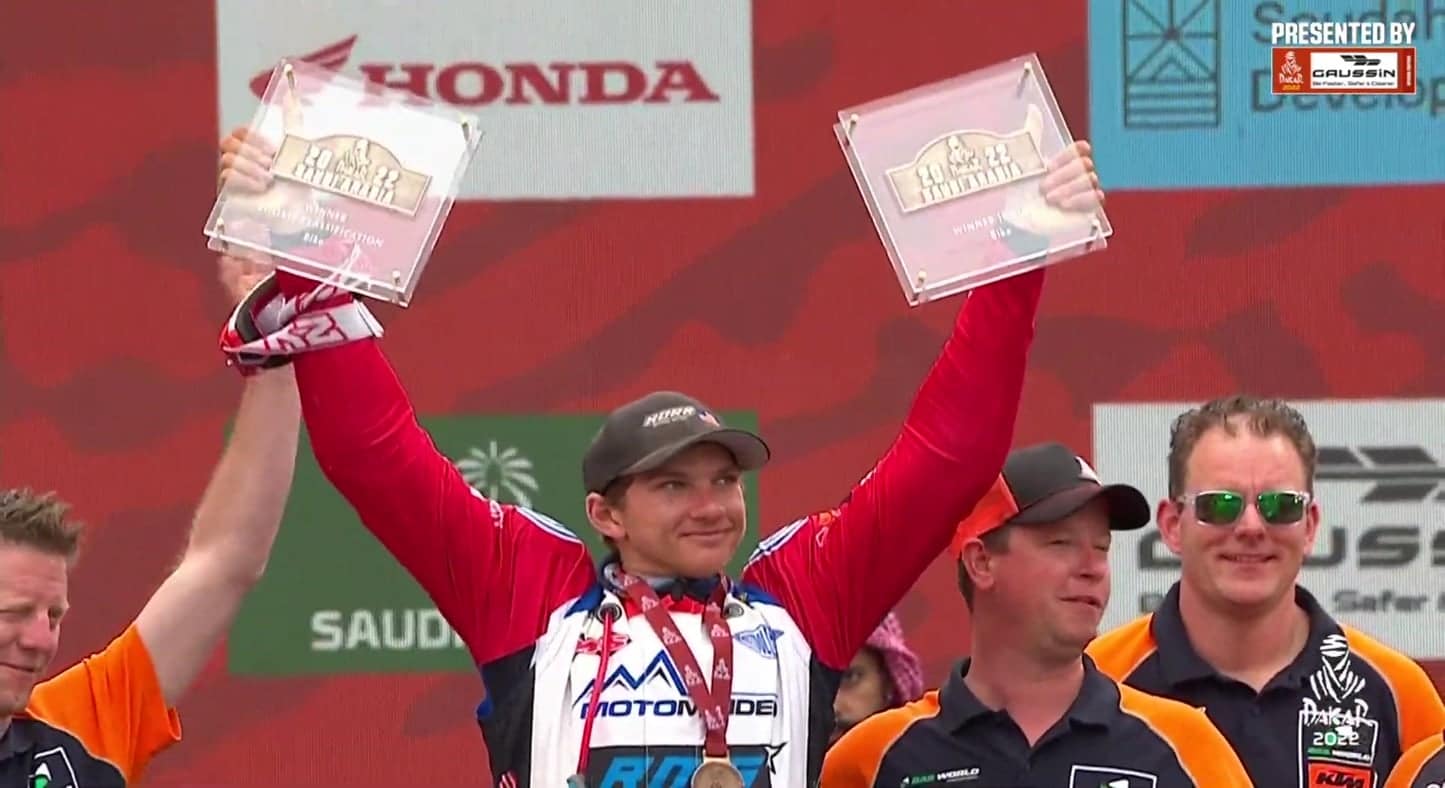 Perhaps the brightest star for the Americans was 20 year-old Mason Klein, who won the Rally 2 class for privateers and placed 9th overall. Skyler Howes, who sustained a concussion after a stage 7 crash, was especially proud of Mason Klein’s performance: “Congratulations kid! I’m super proud of you, but… I’m not surprised. I don’t think most people realize how much preparation this kid puts in. I have never in my life met someone so dedicated. Every day training the body, navigation, riding skill, and mechanical skill. He did this the right way. Everything that I did wrong along the way, he did right. Went to the proper races to train, went to the proper school, he put in the work! I’m proud to have been able to mentor him a little and watch him succeed.
Top rookie
1st place Rally2
9th overall
All at 20 years old
That’s a hell of an accomplishment buddy. Soak it up, cuz when you get back it’s right back to work.”