STRANG WINS HIS FIRST GNCC OF THE SEASON 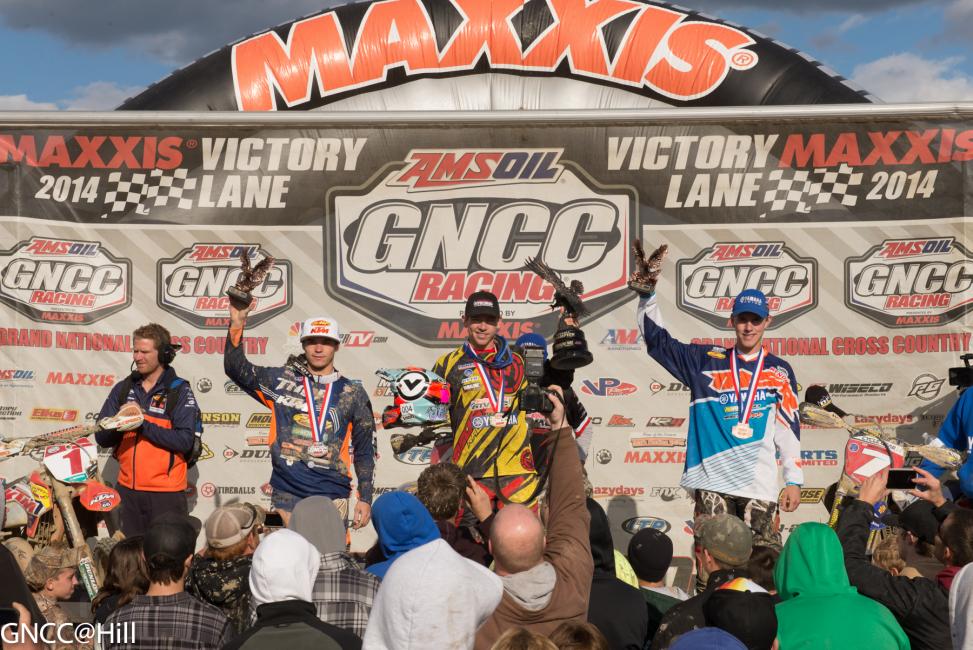 ST. CLAIRSVILLE, Ohio (October 6, 2014) – The penultimate round of the 2014 AMSOIL Grand National Cross Country Series presented by Maxxis, an AMA National Championship, was full of excitement and chaos on Sunday as 18 of the world’s best off-road racers lined up in the star-studded XC1 Pro class. Equipped with four GNCC National Champions, a few international stars and many new additions to the front row, the ITP Powerline Park GNCC was the ultimate showdown in off-road racing.

In a come-from-behind fashion, it was 2010 GNCC National Champion Josh Strang who emerged victorious to capture his first GNCC win since 2011. But it wasn’t without a fight from two-time champion Kailub Russell, who literally banged bars with Strang in an intense battle for the lead, all aboard a 150cc KTM 2-stroke. While the XC1 Pro battle got a little heated in the concluding moments, defending XC2 Pro Lites Champion Grant Baylor rode uncontested all afternoon to wrap up his second straight title in the class. 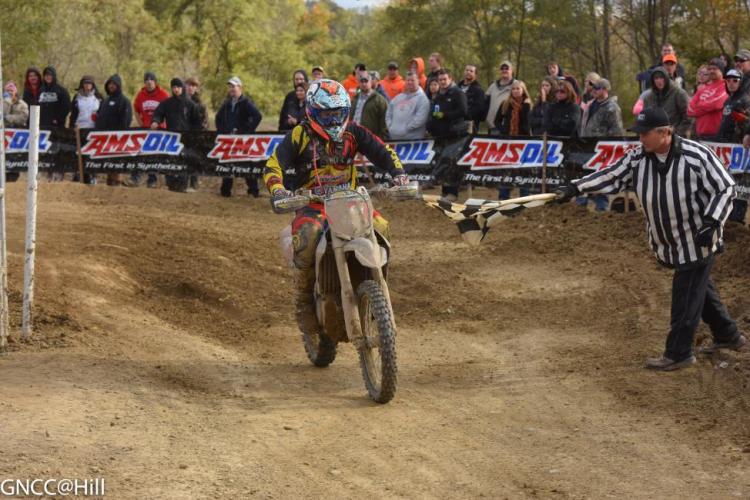 Josh Strang put in a come-from-behind performance to capture the win Photo: Ken Hill
As the green flag dropped for the XC1 Pros, N-Fab AmPro Yamaha’s Paul Whibley and Factory FMF/KTM’s Russell jumped out ahead of the rest of the field but Whibley prevailed once again to capture another $250 All Balls Racing XC1 Holeshot Award.

In just his first race back from injury, Factory FMF/KTM’s Charlie Mullins commanded the lead on the opening lap with a hard-charging Russell on his tail. N-Fab AmPro Yamaha’s Jordan Ashburn settled into the third place position, with Steward Baylor, Andrew Delong, Whibley and Thad DuVall running close together on the first lap. 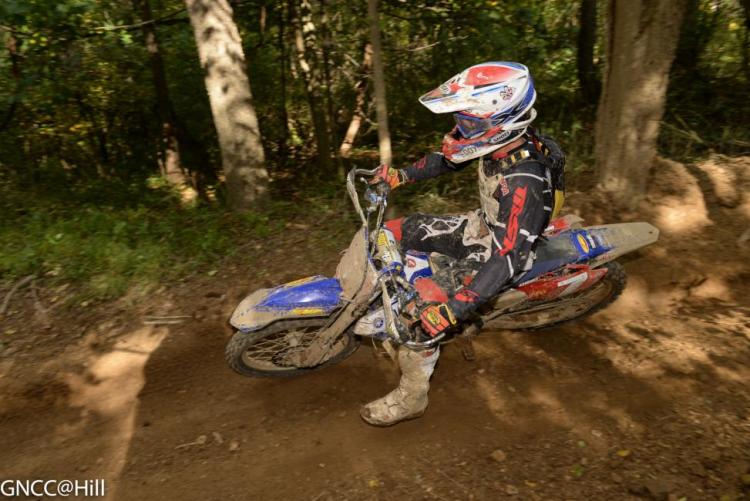 Jordan Ashburn upped the pace at the end to secure third overall Photo: Ken Hill
By the second lap, Russell was able to make his way to the front, with his KTM teammates Stu Baylor and Mullins close behind. Meanwhile, Rocky Mountain ATV*MC/N-Fab AmPro Yamaha’s Josh Strang was making his way through the pack after a miscue on the start caused him to take off at the back of the pack.

“I started falling on the starter before the flag flew and the bike just started,” Strang said. “I knew I was in trouble so I tried to make as many passes as I could because I knew I was going to get a penalty.”

Race officials held Strang for 15 seconds after the first lap to reflect a penalty from the start, and the Aussie native used that time to fuel his fire as he put on a hard charge toward the front. In fact, Strang laid down the $150 KR4 Performance fastest lap of the race on lap three as he focused on closing Russell’s lead gap. When the two-lap card fell, Strang was within striking distance and the intensity skyrocketed between Russell-who was leading the overall on a 150cc machine-and Strang-who was hungry to capture his first win of the season. 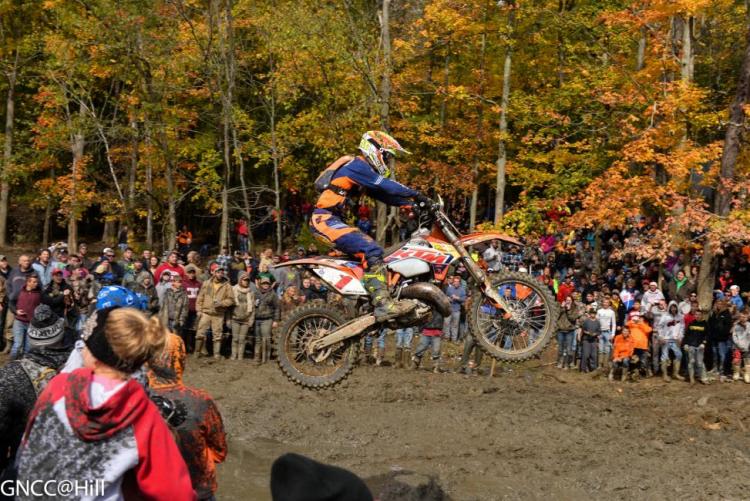 Kailub Russell put forth an impressive performance on the 150cc machine Photo: Ken Hill
“It was really rough, especially in the open stuff and not having enough power to go up some of the hills and through the bumps,” Russell said. “But I saw Josh [Strang] coming and he was riding well. We kind of came together over by pro pits, but I wasn’t going to let up, this is racing.”

Russell and Strang banged bars throughout the remainder of the race, where things especially got heated on the final lap just before the pro pits. Russell came charging through first but was forced to stop for a splash of fuel and that’s when Strang was able to make a clean break for the lead. Russell ended up spending more time in the pits to repair his brake pedal, which allowed Strang to maintain a comfortable gap into the finish.

“Like Kailub said, he’s on a 150 and I’m on a 450 so when I caught him I had so much more power,” Strang commented. “He was just trying to protect the line and we got a little close but it’s alright, it’s racing.”

Strang was able to carry his lead into the finish, where he claimed his first victory since the 2011 season, a bittersweet moment for the past champ.

“It’s been a really long time since my last win so it feels good to get up here,” Strang added. “Kailub was obviously on a 150 today, so yeah he was riding awesome considering it was such a little bike. I’m happy I won either way. It’s good to be up here, it’s a relief.” 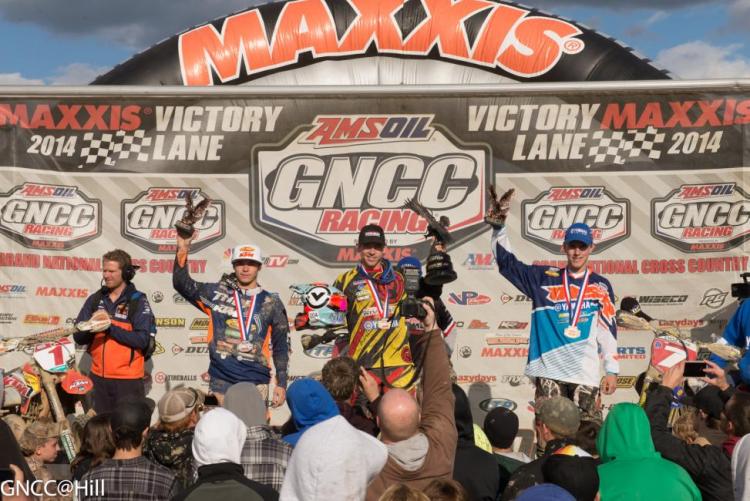 XC1 Podium: (left) Kailub Russell, Josh Strang, (right) Jordan Ashburn Photo: Ken Hill
The battle for third was just as exciting with Ashburn, Mullins, Steward Baylor and JCR Honda/Rockstar Energy’s Chris Bach exchanging positions all afternoon. After leading the opening lap, Mullins settled into the third place position for a majority of the day. But in just his first race back from a double wrist injury over the summer, Mullins admittedly struggled toward the end of the three-hour race and that’s when Ashburn began making moves. On the final lap, the Tennessee native got by Mullins and maintained his position to secure third overall for the day. Ashburn now sits only eight points behind Strang for third place in the championship standings.

“I felt like I really needed be on the podium points wise,” Ashburn said. “Going into the second-to-last lap I knew I needed to make up some time. On that last lap, I pushed real hard and when I came up on the guys I knew I had to get in front and get out.” 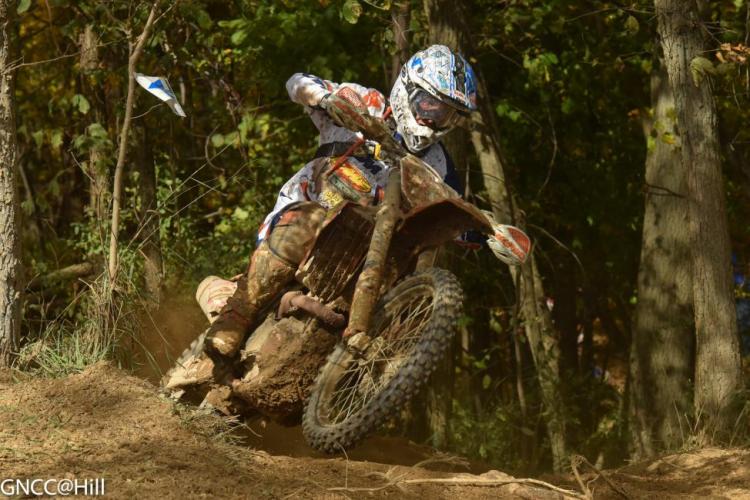 Charlie Mullins rode a solid three-hour pace in his first race back from injury Photo: Ken Hill
Mullins held on to secure fourth overall, followed by Steward Baylor in fifth and Bach in sixth. Australian 4-Day Enduro Champion Daniel Milner finished eighth overall in only his second GNCC appearance, riding aboard the N-Fab AmPro Yamaha machine that he will also ride at the season finale in Indiana. Whibley finished ninth overall, with Moto Vations Suspension/Palmer Motorsports’ Takeshi Koikeda rounding out the top 10 overall. 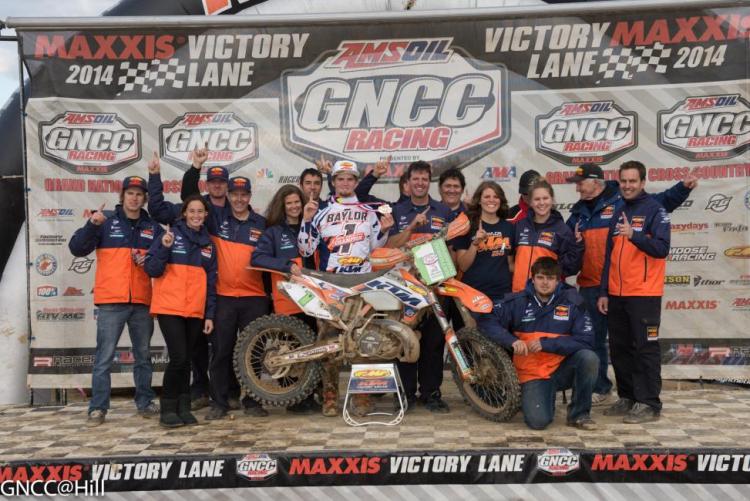 Congratulations to Grant Baylor and the entire KTM team for a great 2014 season Photo: Ken Hill
Ending his XC2 Pro Lites career with a commanding victory, KTM Support rider Grant Baylor was crowned with his second straight XC2 championship. Baylor put on a hard charge to top his class competition by over four minutes, while also finishing seventh overall for the day.

VILLOPOTO TO RACE IN EUROPE