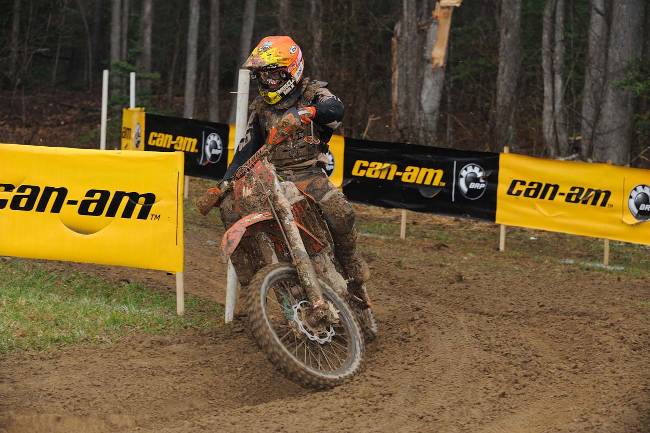 A record crowd turned out to watch nearly 1500 competitors go at it in a driving rainstorm in Morganton, North Carolina, where Strang proved he can win in all conditions, having won the opening round in Florida in the sand, round two of the series in the Georgia clay, and then round three’s rain and mud. The conditions at the Steele Creek campgrounds were perfect when the race got underway, but a steady rain moved into the area just as the flag dropped to start the 3-hour race. From there, conditions deteriorated quickly as the rain got harder, and in fact, the race had to be shortened after a gnarly hill at the 8-mile mark became so muddy nearing the three-hour mark that nearly 40 riders were stranded on it, forcing organizers to pull the plug and revert the scoring to the previous lap.

But the going was good when Strang grabbed a rare holeshot to start the race, pocketing the $250 Motorcycle-USA.com Holeshot Award in the process. Meanwhile, Buttrick quickly found his way to Strang’s rear fender and the two riders proceeded to pull away with Am-Pro Yamaha’s Paul Whibley, Buttrick’s FMF/KTM teammate Nate Kanney and GEICO/JG Racing/Monster Kawasaki’s Jimmy Jarrett in pursuit.

At the two-hour mark, the Strang-Buttrick battle had intensified as the two pulled nearly a minute gap over Kanney, Whibley and Mullins, who were locked in their own separate battle over third. However, XC2 rider Kailub Russell was starting to make waves of his own, and on the third lap he turned the fastest lap of the race, and by the end of the lap he had moved into third place overall. Russell would turn the fastest lap again on lap four, but could still not catch the two leaders, Strang and Buttrick.

On lap six, one of the muddy hills had become so bad that riders were stuck from top to bottom and when Strang arrived there was no place to go.

“When we got to the hill there were riders all over it,” said Strang. “And there were people telling me that we weren’t going to make it. So I decided if I stopped then Cory would stop.”

At that point, the organizers decided it would not be possible to finish the race in the time allowed and riders were sent back to the pits and the scoring was reverted to the fifth lap.

Officially, Strang led the event from start to finish and took the win by some 11 seconds over Buttrick, with Mullins, Whibley and Kanney rounding out the top five.

“It got pretty slippery out there and I had to ride cautious, and Cory was keeping me honest the entire way,” said Strang. “It’s great to win the first three races. They’ve all been so different, with the sand, the clay and the mud. But I’ve worked hard and it is paying off. I’m having a blast right now and I think that’s been the difference.”

Buttrick was thrilled to finish second, after a disappointing showing at the first two rounds.

“I just tried to stick with Strang all day,” said Buttrick. “There were a couple of times I felt a little faster, but then I decided to play it cool. On a day like today, with the conditions, a second is as good as a win. I needed this in a bad way.”

“When we got to the bottom of the hill I saw Josh shut his bike off and I was so mad, I wanted to keep on going,” added the 18-year-old. “But then I heard [Trail Boss] Jeff Russell come over the radio saying, ‘no one move.’ So then I knew it was over.”

Despite finishing third in the XC1 division, Mullins couldn’t have started the race any worse than he did.

“I started dead last, and on the first lap a guy ended up going down in front of me and I ended up going down in a ravine,” said Mullins. “But a little luck played in my favor today, I latched onto Whibley and he got me going into the second-to-last lap. I’m not happy with how I rode, but I kind of lucked out and I’ll take third.”

Completing an unbelievable ride on a 250F was Russell, who ended the day with third overall, in addition to taking the win in the XC2 class, topping Monster Energy/FAR/Andrews Yamaha rider Jason Thomas and GEICO/JG Racing/Monster Kawasaki Scott Watkins.

“Jason led for over a lap and then he took a bad line and I took a better one and got by him,” said Russell. “I just put my head down after that and started catching the pros. I rode with Charlie and Whibley and enjoyed the race.”

Thomas admittedly struggled with the conditions, despite grabbing the $100 Motorcycle-USA.com holeshot award.

“I didn’t feel good all day and I just struggled,” said Thomas. “Maybe because it was wet, the two-stroke was spinning a lot more than the four-strokes and I just had problems. I crashed at one point and hurt my hand again, but I was able to come back and finish second.”

Top Amateur was Open A rider Jordan Ashburn once again.

In the morning race, Shane Watts and Rodney Smith went at it like old times in the Sportsman A class, with Watts getting the win on this 250 KTM, while Smith finished second on his fuel injected RMX450Z.

“It’s been a long time since I raced with Rodney and it kind of brings back memories of the glory days, fighting for the championship,” said Watts. “It’s a bit of a bummer that he ended up going down.”

“I got a pretty good start and I got out front and then me and Shane started battling like we used to,” explained Smith. “We came to a spot in the track – a big ravine –  and Shane skidded sideways and missed it and slid into it. I was upside down and when I finally got out it was in fourth. It took a lap to regroup and I got back into second.”

The Can-Am Grand National Cross Series will return in 3 weeks for the Pirelli Big Buck GNCC, held in Union, S.C. on April 10-11.