Strang Back on Top in Ohio 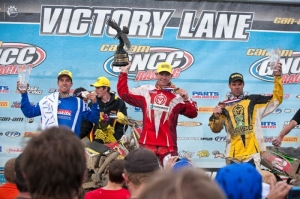 Photo By: Matt Ware
Strang was on a roll all day, delivering arguably the most dominant win of the year.

St. Clairsville, OH  (October 4, 2009) – Josh Strang hasn’t given up yet. Team FMF Makita Suzuki’s young Australian talent dominated the ITP Power Line Park GNCC over his teammate Charlie Mullins, while his championship rival Paul Whibley finished third on a GEICO JG Racing Monster Kawasaki. The win, Strang’s fifth of the year, prevented Whibley from clinching the 2009 Can-Am Grand National Cross Country Championship a race early, and the series battle will go down to the finale at the Klotz Ironman GNCC in Indiana in three weeks.
Strang led all seven laps on the 12-mile course, looking stronger than ever. ‘I’ve had a lot of talks with (Team Manager) Mike Webb to try to figure out what it is that makes me click,’ said Strang. ‘Last week I was making all kinds of mistakes and wasting energy, today I didn’t make a mistake and I don’t even feel that tired. I wasn’t really thinking about the title, I was just trying to ride like I know how.’

Mullins was one of only a few able to leap over the track’s largest mud hole.In XC1, Am-Pro FMF Yamaha’s Thad DuVall took the $250 Motorcycleusa.com holeshot award on a bored-out WR290F, but Strang grabbed the early lead and started to build a gap. A huge mudhole then claimed DuVall and his teammate Barry Hawk, as well as Shock Doctor KTM’s Nathan Kanney. This put Whibley up to second, but he then had a battle on his hands with Mullins.
‘The title was on my mind early in the day, but once I started riding, I didn’t really think about it,’ said New Zealand’s Whibley, who could have clinched the title if he had beaten Strang. ‘I just didn’t have it for those guys today. Josh and Charlie rode awesome and third was the best I could do.’

Photo By: Matt Ware
Whibley overcame a few crashes to take third.Mullins pressured and passed Whibley, then Whibley got him back, only to crash trying to jump over the mudhole and hand the spot back to Mullins.

‘It was a good day today, I had a lot of fans out there cheering me and helping me in the mud holes so that helped,’ said Mullins.

Whibley’s crash in the mud hole could have been scary, as he simply needs to avoid injury or mechanical failure to clinch the title. ‘I had a bunch of crashes out there today and at least that one was in the mud, so it was soft!’ said Whibley.

Shock Doctor KTM’s guest riders Mike Brown and Taddy Blasuziak rode well. While Brown ran fourth, he was passed in the pits by his charging teammate Kanney, who appeared to be headed to the front to catch the lead trio. But Kanney tagged a tree and dropped from the race with injured fingers. Brown took fourth back and won a battle with Whibley’s teammate Jimmy Jarrett to keep it. Jarrett, recovering from a broken wrist, was fifth.

Photo By: Matt Ware
EnduroCross specialist Taddy Blazusiak rode well and finished sixth in his first-ever GNCC.Blazusiak, the EnduroCross Series points leader, was making his GNCC debut, and he proved he can indeed ride bigger, faster tracks by mixing it up in the top-five all day and taking sixth.

‘We really only decided to do this on Friday, and my bike was just an endurocross practice bike,’ said Blazusiak. ‘It didn’t work so well in the fast stuff, but that was okay, I had a good time.’
Husaberg’s Jesse Robinson, riding with a broken hand, took seventh. ‘Batman’ Ben Bouwens nearly grabbed another holeshot on his YZ250, but he started second and ended up eighth. California’s Jason Davis was ninth in the XC1 class. Husqvarna’s Glenn Kearney, riding a 2010 250F, had brake troubles but ended up tenth.

On his way to winning the XC2 class for 250cc bikes, Thomas collected a career-high fourth overall. ‘This one felt just like Snowshoe, I didn’t make big mistakes and I had good luck,’ said Thomas.

Chris Bach collected the top amateur award with his fifth-straight Open A triumph, and a career-high seventh overall. New XC2 Lites Champion Kailub Russell grabbed the $100 Rekluse Holeshot Award but got stuck in a mud hole and dropped out of the race.

Photo By: Matt Ware
New XC2 Champion Kailub Russell grabbed the Cometic holeshot but failed to finish the race after getting stuck.

Photo By: Matt Ware
Strang, Mullins and Whibley were in the top three for the second-straight race.