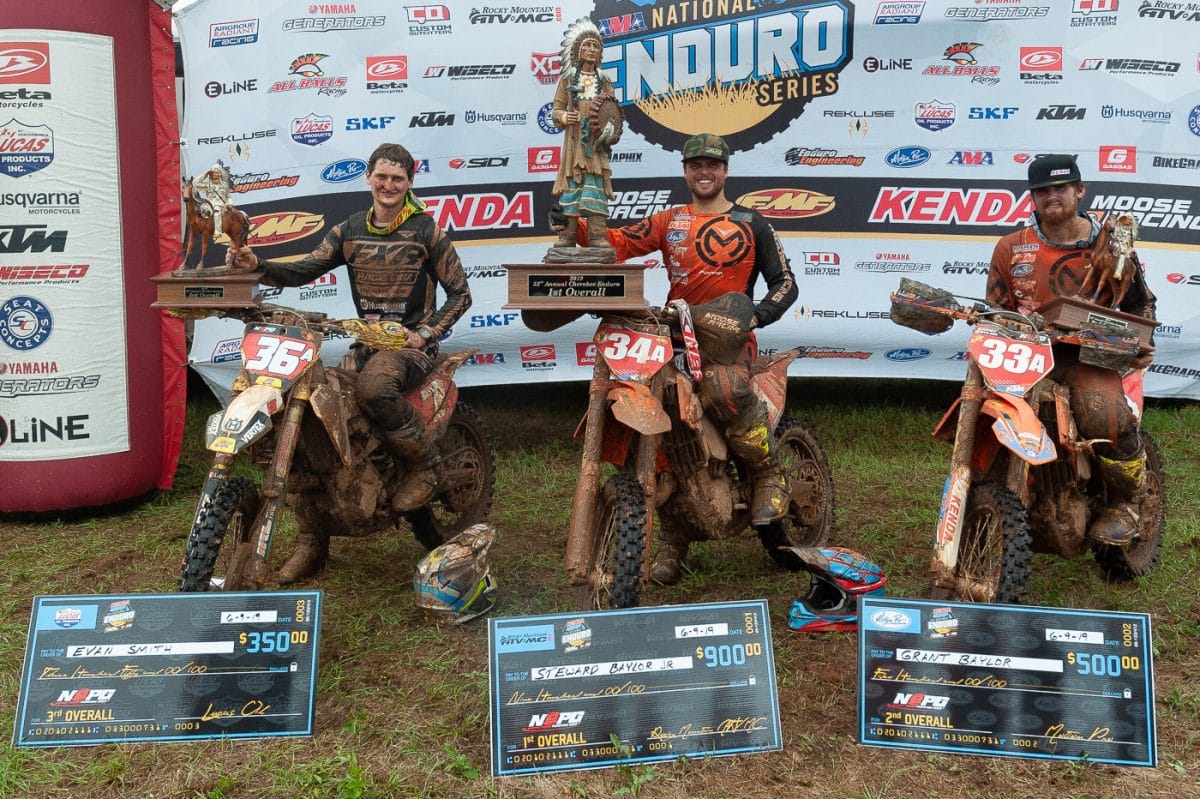 Hostile weather continued to plague off-road motorcycle racing across the country as heavy downpours wreaked havoc at this weekend’s Cherokee National Enduro, in Greensboro, Georgia. Rain leading up to and during the race left the Cherokee National Forest trail system in soggy conditions, which led to deep ruts and slippery trail in places, while other areas of the course held up nicely.

Tely Energy Racing KTM’s Grant Baylor won the first test of the day by 30 seconds and appeared to be heading to a second-straight win in the series when a mishap in the final test put the South Carolina rider into the trees and cost him a full minute before he could return to the fray. In the meantime, Grant’s brother and teammate, Steward, took advantage of the situation and brought home his second win of the season. “It was really slick out there and Grant got me by about thirty seconds in the first test, so I just decided to start riding a little less aggressive and in a really tall gear,” said Steward. “Luckily, we were able to chip away at the lead. Then Grant got stuck in the last test, and when I saw him there, I knew I just had to cruise it in.”

Grant was disappointed at losing the win, but happy for his brother. “I was just trying to push the limit a little too much,” said Grant. “I came into a corner a little too hot and lost it and went off into some really thick trees. I was underneath of the bike and couldn’t get it off of me, so I lost the overall lead there. It was a pretty frustrating day, but at least I still ended up second to my brother.”

Rounding out the overall podium was Beta USA’s Cody Barnes, who turned in a surprise third-place finish on his 250 RR despite suffering a mishap in test three. Barnes was also the top finishing Pro2 rider. “In the third test I was pushing pretty hard down a downhill and ended up kind of pushing a little too hard and jumped into a ditch and ended up going down pretty good in one of the faster sections,” said Barnes. “I lost quite a bit of time there, but I think I made up for it in test five. Then that last test, because so many riders didn’t ride it, it was super slippery. There wasn’t a lot of berms developed. I just tried to ride smooth and ended up coming out with a great time.”

Tely Energy Racing KTM’s Liam Draper was sitting in third overall heading into test six, but a mental mistake cost the New Zealander the final step of the podium. “It’s just a bummer, but we just got side-tracked waiting on my start time before the final test and then Stew yelled and he goes, ‘Dude, you got to go.’ So I was late for my start,” said Draper. “Me and Cody [Barnes] were pretty tight going into the last test. Then I went in a minute late and that cost me.” Draper finished second in the Pro2 class with his fourth overall finish.

Husqvarna/ Max Motorsports/FXR Racing’s Evan Smith was third in the Pro class and fifth overall. “It started pouring in the first test,” said Smith. “I got wrapped up in some vines and probably spent a minute or so there and that kind of put me in a hole for the day. Then I won test three and was feeling good and gaining a lot of time back. But then in the last test I got some vines across the face.”

XC Gear/Enduro Engineering/Husqvarna’s Cory Buttrick continues to regain his Enduro legs and finished sixth overall with some pretty impressive test times. Despite being a bit under the weather, GasGas North America’s Thorn Devlin got off to a fast start and was sitting in third overall after two tests. However, a tumble in the final test dropped the Pennsylvania rider to seventh overall for the day. “After the second test I came in and saw I was in third overall and I held that until test five,” said Devlin. “But going into test six, I came down over the hill right off the start and there was a bridge and I wiped out. I bent the shifter completely around the frame, so I couldn’t shift. I went to put my foot on the peg and when I hit a bump it would click it into false neutral. So, I literally rode that whole section not being able to shift or with the left foot on the peg.”

Beta USA’s Mike Witkowski finished off the day with the fifth-fastest time in the final test and wound up with an eighth overall finish, beating out GasGas North America’s Ron Commo III by 10 seconds. Commo’s ninth overall was also good enough for third in the Pro2 division. Six-time National Enduro Champion Russell Bobbitt rounded out the top 10 on his Gnarly Routes KTM.

In the Women’s Elite class, Rockstar Energy/Husqvarna/Moose Husqvarna’s Tayla Jones took the overall win despite winning just one test. Mepmx/Fly/Grizzly Peak/Traveler’s Rest Speedway/KTM’s Mackenzie Tricker won the remaining five tests and finished second overall, 13 seconds behind Jones, after she lost 50 seconds in test one when a rider fell in front of her on a bridge. “I kind of just was at the wrong place at the wrong time,” said Tricker. “Somebody crashed on a bridge in front of me, and they fell six feet down and their bike was blocking the bridge.” Rachel Archer of New Zealand finished third on an Am Pro Yamaha.

The Kenda AMA National Enduro Series returns to action on July 28 at the Rattlesnake National Enduro in Cross Fork, Pennsylvania. For more information on the series go to www.nationalenduro.com. 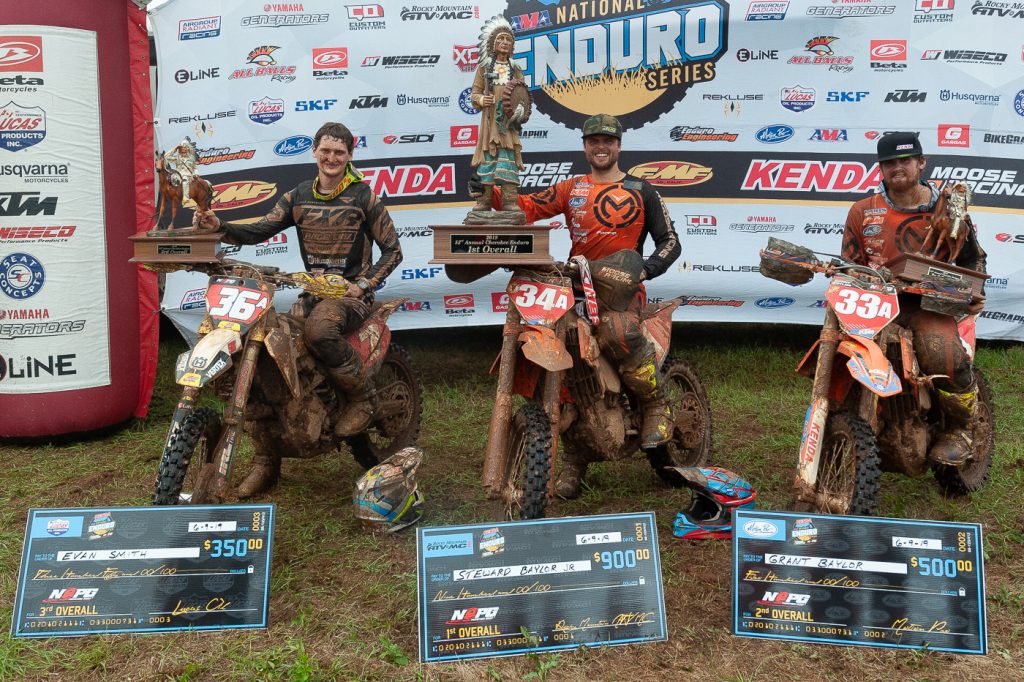