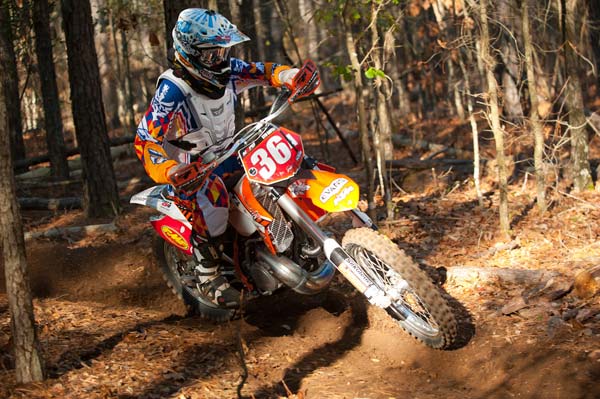 Steward Baylor broke the ice on the 2012 AMA Rekluse National Enduro
Series by taking a surprise win at round one of the series in Sumter,
South Carolina. In the same manner that Charlie Mullins did two years
ago, Baylor came into the race as a privateer and flying well under
the radar, however the 17-year-old rode a spectacular race despite a
hard crash in the fourth test and claimed the upset win over a stacked
field of factory-backed Pros. Baylor won three tests in all and
finished the race with a 40-second advantage over second place.

The runner-up spot went to eight-time National Enduro Champ Michael
Lafferty, who raised a few eyebrows, as well, with his strong ride in
the treacherous Sumter sand. At 37, the factory Husaberg rider still
has what it takes to win at this level, and he put himself in position
to take the win should Baylor fail by winning two tests.

Rounding out the podium was Mullins, who finished 60 seconds behind
Lafferty on his FMF/KTM 450 “Dungey Replica”. The 2009 series champ
and reigning GNCC title-holder was fastest in the fourth test, after
suffering a setback in the third test when he burned up his clutch
after he accidentally unscrewed his oil filler cap with his boot.

FMF/KTM’s Cory Buttrick finished fourth after running near the front
in the early tests, the Ohio rider competing on a 300cc two-stroke
after riding most of last year on a four-stroke. Meanwhile, Obermeyer
Yamaha/Raines Riding University/Offroadviking.com’s Brad Bakken
rounded out the top five on a YZ250.

In all, 475 riders competed in the six-test, 75-mile race, which
consisted of the standard Sumter fare: tight, sandy single-track.
Round two of the series takes place on February 19th, at Greensboro,
Georgia, for the Cherokee National.