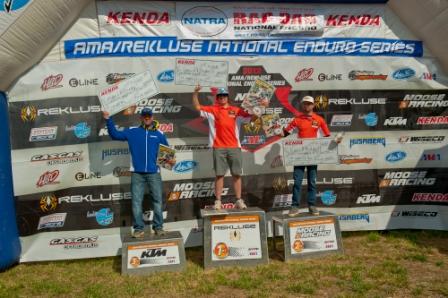 – Steward Baylor could not have been more dominate while winning round four of the AMA Rekluse National Enduro Series in West Point, Tennessee, the PowersportGrafx-RidePG.com/Genuine Dirt Racer/WP Racing USA KTM rider topping all six tests en route to a one-minute-fifty-four-second margin of victory over defending series champ Russell Bobbitt.

Baylor attacked the slippery course from the get-go, winning the opening test by 26 seconds over FMF/KTM’s Charlie Mullins. The South Carolina continued to pour it on, adding to his lead in each test with his on-the-edge style.

Bobbitt, on the other hand, took a bit more time to get in the flow of things, but came on strong at the midway point after changing shocks on his factory 250. Bobbitt was close to Baylor in the final two tests, but lost too much time in the opening tests to challenge the 18-year-old for the lead.

Eight-time national champ Michael Lafferty was steady all day on his factory Husaberg TE250, and didn’t hit the dirt once on his way to the final step of the podium. Meanwhile, FMF/KTM’s Corey Buttrick edged factory Husaberg rider Nick Fahringer by 19 seconds for fourth.

Charlie Mullins was in contention early in the race, and sat in second behind Baylor after the first two tests, however, brake problems in the fifth test relegated the FMF/KTM rider to ninth overall.

After four rounds, Baylor holds a 24-point lead in the series standings over Buttrick, 115 points to 91, while Lafferty sits third at 88 points.

The AMA Rekluse National Enduro series resumes on May 6th in the Kisatchie National Forest in Forest Hill, Louisiana. For more info go to www.nationalenduro.com.