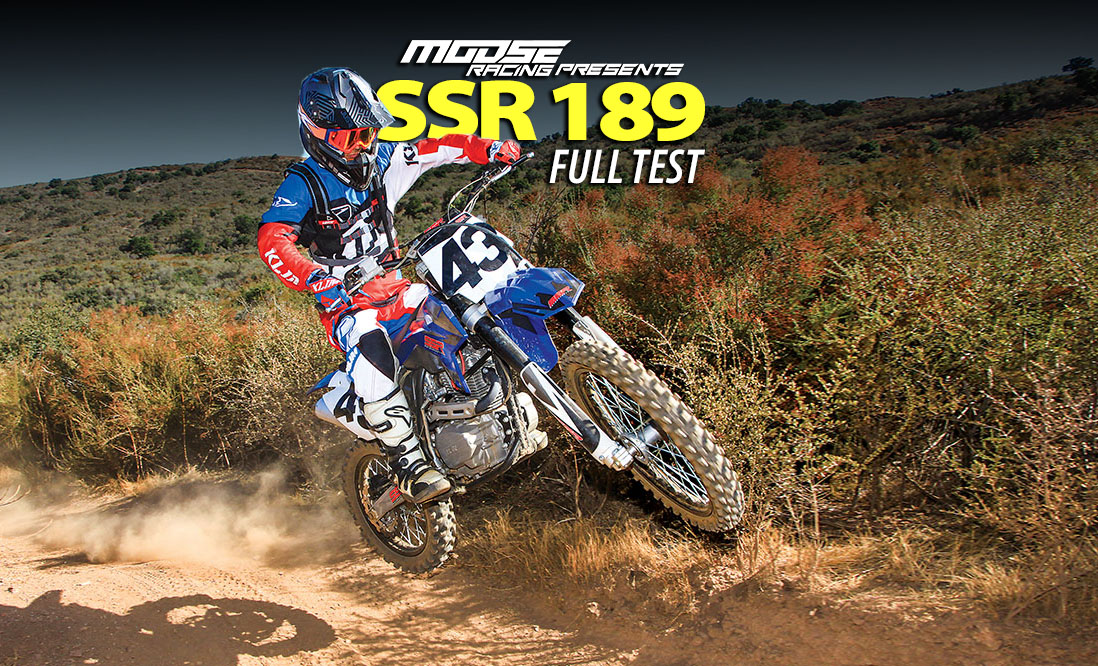 A few years ago SSR introduced a play bike that we might call a “midsize”— a machine halfway between a true play bike and a full-size bike that was impressive for both its value and performance. The fully updated 2020 SR189 boasts 19/16-inch wheels and tires like a 105cc class mini. But, rather than a liquid-cooled two-stroke engine, the SR midi runs a carbureted, air-cooled four-stroke engine. New for 2020, the SR189 has an improved seat, bodywork and graphics. Available colors are dark blue or white 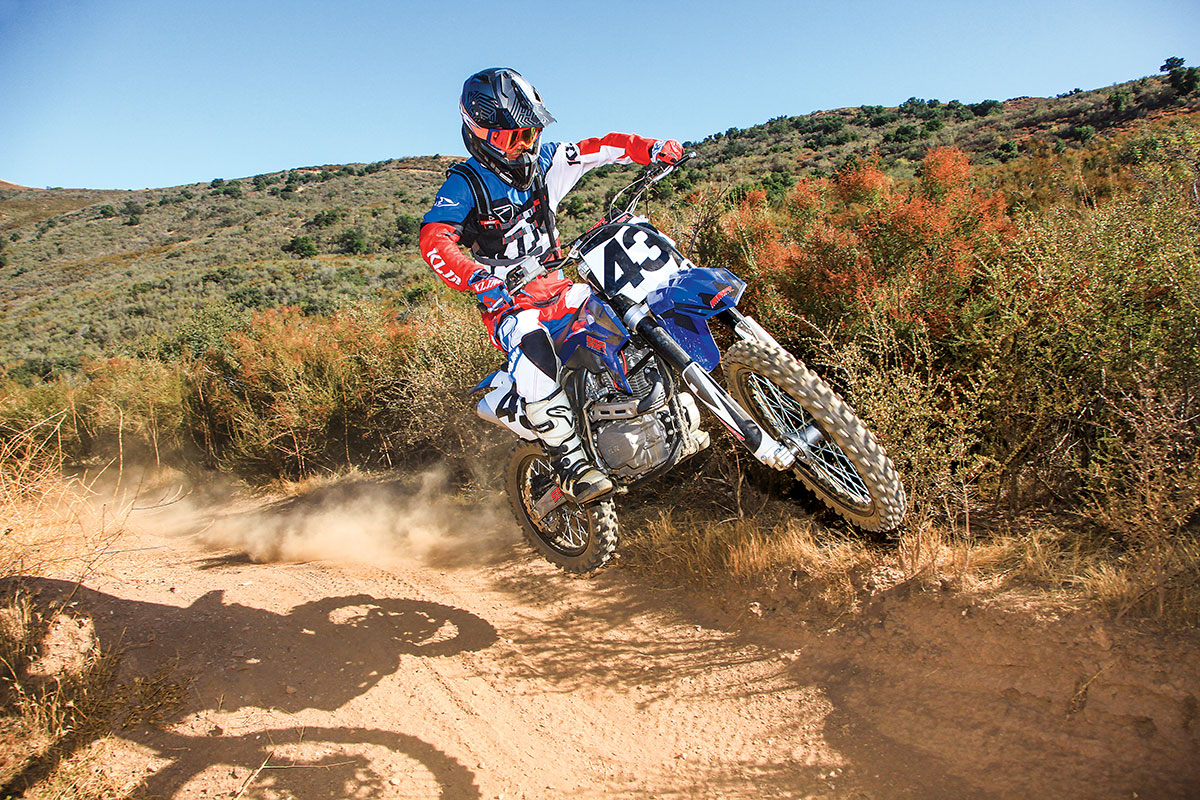 WHAT IS INSIDE?
In addition to the new cosmetic look, the SR189 has significant internal changes. Of all the midsize four-stroke play bikes we see, only the SR189 has a 10-inch-travel inverted fork with both compression and rebound adjustments. The SSR’s fork has massive 43mm inner fork tubes and a large front axle with proper double pinch bolts on each side to add rigidity to the front end. The cast-aluminum triple clamps have double pinch bolts as well.
Out back, the 189 has just shy of 8.5 inches of rear-wheel travel. The piggyback shock has a large shaft and a sizable body with spring preload, compression and rebound adjustments. The shock does use a linkage that is attached to a steel swingarm that looks like it could be aluminum. You will see that the frame is robust for a trail or play bike, particularly in the swingarm pivot area. It is constructed of stamped and welded parts, so it is fully boxed in like modern steel-framed motocross machines. It has a big-bike size and styled rear axle and chain blocks. It even takes a 32mm axle nut like a full-size modern bike.

WHAT ABOUT THE ENGINE?
Things are a little more old-school in the engine bay. As a two-valve, air-cooled, single-overhead-cam, carbureted four-stroke, the SR189 is typical of the Honda CRF150F, CRF230F, Yamaha TTR125 school, but the SSR differs in carburetion. It uses a 30mm Chinese carburetor with a handlebar-mounted remote choke. A Honda CRF150F uses a 24mm carb, so the SSR runs harder, particularly on top. The carb uses normal Keihin pilot jets but uses a less-typical flat main jet. We’d heard stories of accelerated slide wear in Chinese carburetors, but ours had a chrome-plated brass slide that looked perfect after many hard hours. The carburetor does not have an accelerator pump, so it hesitates if the throttle is whacked open too fast.
The engine has both a kickstarter and an electric starter. To be honest, we never even tried the kickstarter and even considered taking it off. Shifting is crisp, if not especially smooth. Young riders with smaller feet felt it was harder to shift than those with a size-9-or-larger boot. Our engine didn’t use any oil. We changed the oil twice, and the magnetic drain plug never evidenced any worrisome chips or metal filings. It has an oiled foam air filter with a large element for a machine this size.

LEGALITIES
The exhaust note on our bike has a bark to it. The pipe is a solidly mounted, attractive unit, but there is no spark arrestor. That means that the SR189 is a closed-course competition model. Obviously, it would be better if the machine met EPA standards for trail bikes so it would have no trail restrictions. This matters more in states with lots of national forest and BLM land. It matters not at all for those who ride on private property.

WORKING ON IT
You remove the saddle with a single fastener under the rear fender. This gives you access to the battery and foam air filter. A single wing nut allows you to move the small and light battery and reach the wing nut, securing the filter element. Both the front and rear wheels are easy to remove. The rear wheel has an added washer between the rear-brake caliper mount and the swingarm that requires a little care, but nothing out of the ordinary.
You will find a variety of fasteners, including a lot of Allen bolts. That can make working on the bike slightly time-consuming but not bad. It is unusual for a bike of this class to have a removable subframe, and that is fortunate. The subframe must be tilted up or removed to remove the carburetor. Even tilting the subframe up, removing the carburetor is somewhat time-consuming. An in-line fuel filter is standard. There is no reserve setting on the petcock.

GETTING IT DIRTY
Even though the current price of the SSR is quite good at $2689 and it has an enormous amount of technology invested for a play bike, it is still a little-known quantity. Therefore, we attempted to put as much time on the little machine as possible. We raced it at a quarter-mile flat-track race in completely stock form, including the stock Chinese knobby tires. Pro dirt tracker Ajay Hateley won his heat, then finished third in the main event of the modified 150cc air-cooled class. Some of the competing 150s were rumored to be as large as 215cc, so we were very pleased with the performance. We spent two full days on trails for a total of 100 miles. All of those miles were with adult riders in punishing conditions. Finally, we managed to hit a total of five track days.

The standard tires have a soft-terrain pattern and look to them. They worked fine in sand and on a prepped track, but not so well on hard-surface tracks. After one day on the trail and three track days, the rear tire chunked and started to spit off knobs. To be fair, we were running the soft-terrain tires on blue-groove clay. We installed a set of MotoZ tires patterned for intermediate to soft terrain. The MotoZ have held up well. We handled the other trail day and the last three track days with them. When the track gets dry and hard, it is best to look for softer dirt at the outside of the track, but otherwise the traction was very good and the tires wore extremely well.

Despite riding the SR189 hard, and some of the riders being taller and heavier than should really be on a machine this size, the bike handled the punishment well. We lost one small bolt holding the faux radiator shrouds to the fuel tank, and after smashing the chainguide into a rock at speed, we snapped that off.

We doubt that any plastic chain guard would have survived the impact. The grips, plastic, graphics, frame and rims all look great. The spokes are still tight, and the bike is working well. As we mentioned, the SSR comes with a magnetic drain plug, and we performed two oil changes and didn’t see any unusual metal on the magnet.

HOW IT WORKS
In order to get the SR189 running, you must turn the key and hit the starter button. Our 189 started easily every time. There is a choke lever on the left side of the handlebar, and it helped when the engine was cold but was only needed for mere seconds. After that, the engine ran cleanly and started in gear or in neutral.

On a track, first gear is fine for getting the bike moving, but you immediately shift to second. That first-to-second jump is a little wide, but the rest of the ratios allow the SR to stay in the happy part of the power as it goes from gear to gear. On small, made-for-minis tracks, the bike works well, with superior suspension performance compared to other bikes in the play bike class. With its stout frame, beefy swingarm, large axles and huge fork tubes, the SSR can be ridden hard without feeling out of its element. The seated and especially the standing riding positions are roomy. Even riders over 6 feet tall are happy standing. The brakes are strong, but we would like more initial bite from the front brake.

Off-road, in technical riding, first gear is a help, but when the going is tough, first gear is a little low and second is a bit tall. We rode desert and mountain trails that had significant hills. Some of the hills were littered with ruts and covered with loose boulders, while others appeared vertical as we approached. Our bike handled all the climbs, sand washes and even mild whoops quite adeptly. With a lighter rider aboard, the bike handles the rough better.

A good Honda CRF150F makes 11.5 or 12 horsepower, but the SR189 is claimed to make almost 16 horses. We’d say that number is pretty close. It has plenty of power for trails and for many track situations as well. We had the power to clear some surprising jumps, but for some large jumps we simply ran out of gearing in fifth gear. On fast tracks or trails, the SR189 (and any play bike in this category) gives a whole new meaning to the phrase “fifth gear tapped.”
We did not purposely try to abuse the machine, but we certainly didn’t baby it. During our time on the bike, no spokes loosened, and it didn’t require a chain adjustment or have any failures. We blame ourselves for the lost 6mm bolt and snapped chainguide. We used a pro shipping scale, and the bike came in at 241 pounds with all the fluids and the fuel tank completely full. That means that the claimed 236 pounds is right on. That puts it in Honda CRF150F territory.
We had a blast on this bike in all conditions, and it surprised and impressed all that rode it. The industry needs a fun, capable machine that is this affordable. It isn’t perfect. The seat foam doesn’t provide a lot of cushion. Getting at the carburetor is a major job compared to Japanese play bikes, and we would change the tires as soon as possible. Otherwise, the SSR SR189 did all that was asked of it, and we asked a lot. SSR says they sell fast, and with this much value and performance, they should.