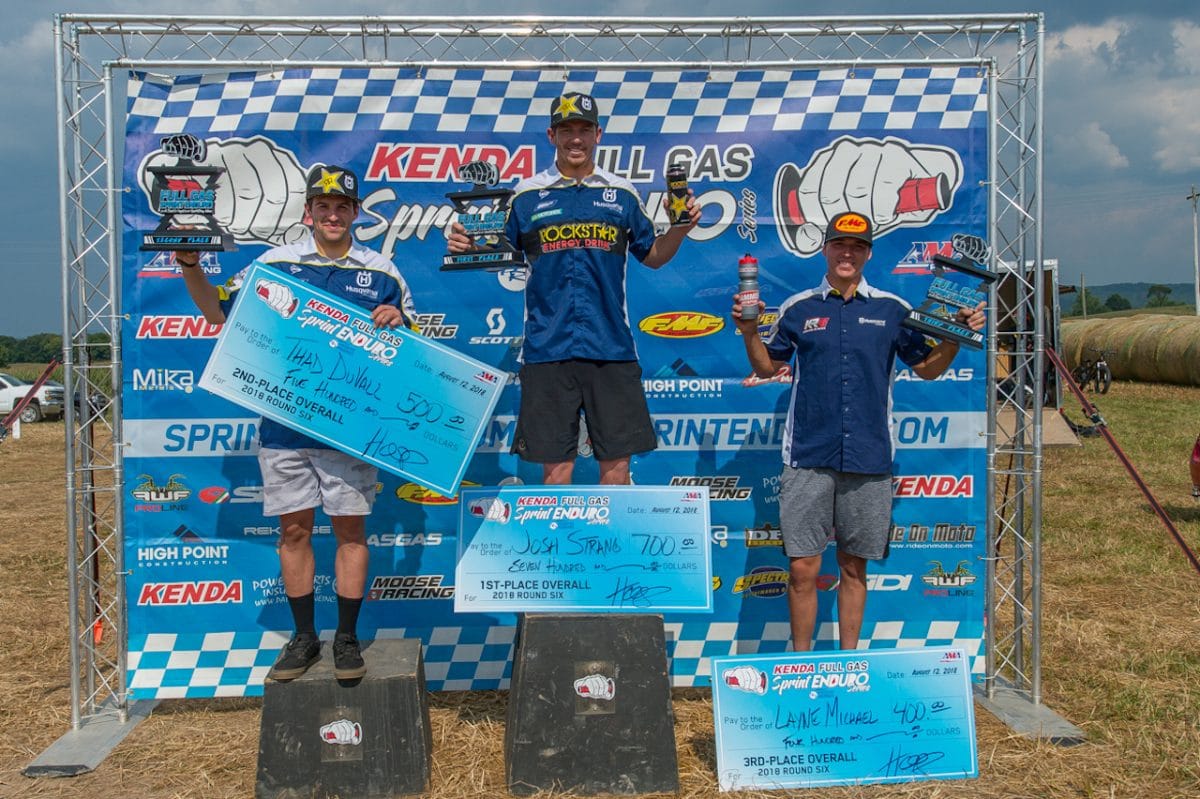 Josh Strang claimed his second overall victory of the season with an impressive performance at this weekend’s Wade Farm Sprint Enduro in Campbellsburg, Indiana, topping runner-up Thad DuVall by 28 seconds after two days of racing.

The Rockstar Energy Husqvarna rider kick-started the event by winning the opening test of the weekend – a Cross test. The Aussie off-road star then added two more test wins to complete the event, although it was his consistently fast second- and third-place finishes that clinched the victory for him.

“It was a good weekend,” the Rockstar Energy Husqvarna rider said after the event. “I enjoyed Sunday the best because I was out in front of the dust and I was able to use lines that other people didn’t use. I picked lines that put me in the grass instead of in the silt and I was able to make up a lot of time – it was good.”

Ryan Sipes held the series point lead going into the Indiana event, however the Kentucky rider skipped the event to be in New York were he was presented as a member of the Puerto Rico Motocross des Nations team at the Unadilla National Motocross. Sipes’ absence opened the door for Strang to take over the series point lead with his win.

“I hate it that Ryan wasn’t at this event, but I’m pleased to have the point lead and I’ll do my best to keep it,” said Strang.

DuVall’s appearance was a surprise. The Rockstar Energy Husqvarna rider was using the event to get back in the swing of things after sitting out a few weeks due to a wrist injury and his entry was unexpected.

DuVall, who won the Kenda Full Gas Sprint Enduro championship in 2017, won six tests en route to second overall, and was in contention for Sunday’s win until a mishap in the final test cost him too much time.

“I’ve been off the bike for a month and a half and I just wanted to come out and have some fun and see where I was at, but it quickly turned into a competition to try to win,” DuVall said with a smile. “I had a blast, I really love these events. I was in the mix until the final test, but I fell into a deep rut and got stuck for a long time and that put me out of the running.”

Layne Michael rounded out the podium. The Coastal Racing Husqvarna rider won one of the Cross tests and was in contention to win a few others.

“I started off well; Saturday was good for me,” said Michael. “Grant (Baylor) and I were close going into Sunday and I just tried to do what I did on Saturday, but I had a few bad rides in the Enduro test, but I was able to overcome it. I had a fast time going for me in the final test but I ended up falling and I thought maybe I gave up a place but I was able to hold onto third. Overall, it was a good weekend for us.”

Fourth overall went to Tely Energy KTM’s Grant Baylor. The South Carolina rider was two seconds behind Michael heading into Sunday’s event and he was just .4 of a second behind Michael after Sunday.

Defending series champion Steward Baylor rounded out the top five. The Tely Energy KTM rider got off to a slow start on Saturday due to a poor tire choice, but turned up the heat on Sunday with different rubber and moved ahead of Jordan Ashburn and into fifth in the final results.

“I put myself in a really bad position on Saturday,” said Baylor. “I made a bad choice of front tires and I couldn’t figure out why I kept ending up on my head so I went back to the tire I was used to and that fixed the problem. So I spent the rest of the weekend making up for that mistake. Day two was a lot better; I usually ride better on the second day anyway because the course is usually rougher and that suits my style. My lines really worked well on Sunday and even though I had three crashes I just missed out on winning the day by .2 seconds.”

“The track got extremely tough with the dry, silty conditions, but I stayed off the ground for the most part and had a good weekend,” said Jones. “I got the win both days so it was good points and I’m looking forward to the next round.”

The Kenda Full Gas Sprint Enduro Series resumes action with round 7 of its series at Big Buck Farm in Union, South Carolina on September 2-3. For more information, go to www.sprintenduro.com.