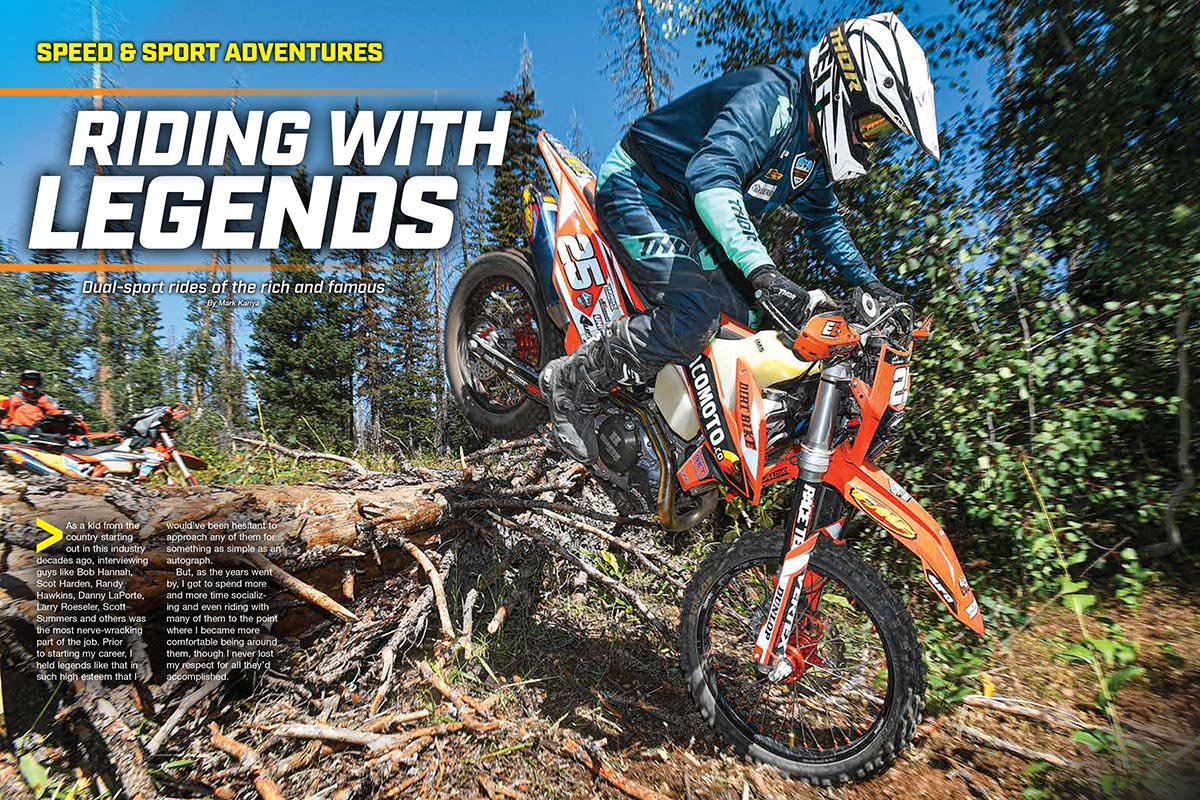 As a kid from the country starting out in this industry decades ago, interviewing guys like Bob Hannah, Scot Harden, Randy Hawkins, Danny LaPorte, Larry Roeseler, Scott Summers and others was the most nerve-wracking part of the job. Prior to starting my career, I held legends like that in such high esteem that I would’ve been hesitant to approach any of them for something as simple as an autograph. But, as the years went by, I got to spend more and more time socializing and even riding with many of them to the point where I became more comfortable being around them, though I never lost my respect for all they’d accomplished.

While the talent each possessed was on display to the entire world, I thought it a shame that more fans weren’t able to know their more personable qualities. Each was different, of course, but all were intelligent, a pleasure to be around, and, often, quite funny with ample mental libraries full of great stories. Thus, when my long-time friend Ken Faught proposed a dual-sport tour operation featuring the chance to ride and hang out with legends, I was in. In a nutshell, that was the genesis of Speed & Sport Adventures (SSA), LLC.

To differentiate it from other rides, however, the goal of the company was loftier—make it the ultimate luxury dual-sport ride, not just a couple of days riding with some guys who happen to be stars of the sport. It had to start with the location, which would absolutely have to feature great trails, breath-taking scenery and preferably world-class lodging where the entire group could enjoy a private setting to create the opportunity for comfortable social interaction. (When you’re the sole group at a facility, each member can better appreciate the company of the others and find those common bonds quicker.)

That was immediately apparent when pulling up to base camp for the inaugural outing, Park City 2021—The Legend’s Ride. Though technically a log cabin—and, apparently, considered one of the top 15 log cabins in the world—the four-story, 30,000-square-foot edifice is far from a modest dwelling Daniel Boone or Abe Lincoln might have inhabited. After all, there aren’t many log cabins that have an indoor pool, hot tub and a game room and can accommodate up to 60 guests, though SSA’s tours won’t have near that number. Our inaugural event hosted seven paying customers, plus an equal number of staff and celebrity guest riders.

Ah yes, the celebrity riders. For this one (and for the 2022 Park City tour that’s scheduled from August 22-26), the riders were Destry Abbott, Guy Cooper and Grant Langston. The customers ranged in age from 38 to 70, and though this is advertised as most suitable for riders from novice to intermediate level, each proved more than competent for any of the trails that guide Travis Whitlock chose. Honestly, I wasn’t expecting that; we figured the considerable price tag of $9950 for a single-occupancy room and $7350 for double-occupancy (which included most everything but transportation to/from site, personal insurance and bike rental for those who didn’t feel like hauling their own) would be most affordable to the more affluent who don’t ride weekly and aren’t looking for Erzberg-caliber trail torture. But, that allowed Whitlock more flexibility in trail choice and everyone benefited.

Park City, Utah, is best known as a ski destination, but when the snow’s gone, the Wasatch Back mountains offer lots of trail variety, from easy two-track to rocky and challenging jeep roads to fun single-track. Combined with the lightly traveled county roads used to get to and from the trails, it’s ideal dual-sport country in late summer, and former hill-climb champ Whitlock seemed to know every inch of it.

While there are a number of tours all over the world, we doubt many can match the luxury accommodations and outstanding meals and perks provided on this tour, including nightly gear and bike cleaning service, helicopter rides over some of the trails and—perhaps the biggest selling point—the opportunity to bench race with legends of the sport on the trail as well as at the lodge. That in itself is a rare treat, and over the five days and four nights, there’s plenty of time to discover the relatable human side to stars like Abbott, Cooper and Langston. (Future tours will explore different venues with different celebrities, such as Colin Edwards, Andrew Short, and Ryan Sipes as their busy schedules allow.)

As Cooper (who rode Editor Ron Lawson’s personal 500 EXC-F) elaborated, “Bench racing was the best! Everybody had stories to [tell]; it was pretty fun.” (Cooper himself marveled at some of Langton’s tales.)

He continued, “One of the guys lived not too far from George Holland [in central California], so I liked hearing stories of how he still talks to George and what [the Holland family has] done. George and I, we were Honda teammates back in the day, although he was factory and I was support, but, still, we hung out a lot. That was neat to hear he’s still around.”

In addition to Park City, 2022 will feature a ride based out of Scottsdale, Arizona, in December, which Abbott will lead. He promises it will offer some of the most scenic desert trails in the state and base from an equally stunning compound. Though COVID has hampered initial plans to add more to the schedule, other diverse but equally intriguing places are in the works. For more information, visit www.speedandsportadventures.com or call (951) 205-8800.

ULTIMATE CR500: BEHIND THE BUILD