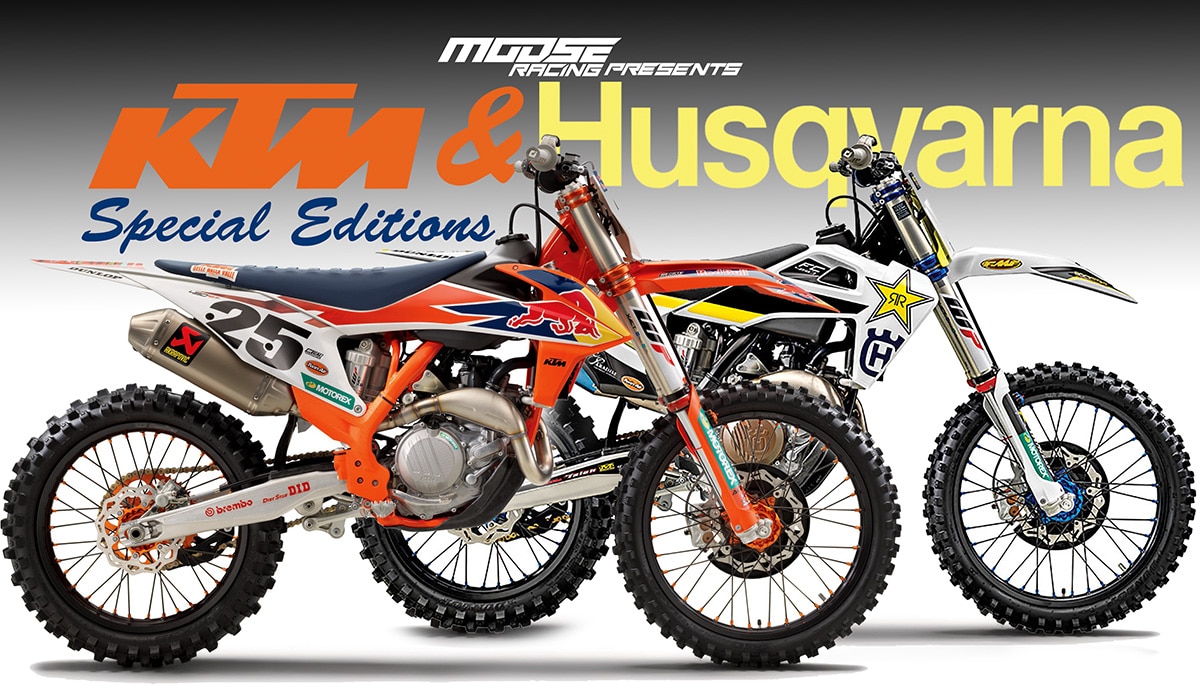 The 2019 1/2 KTM 450 Factory Edition is an advanced look at the 2020 model with a few extra shiny bits thrown into the mix as a tribute to the Red Bull KTM race team. Now, Husqvarna is doing it, too. Since last year Husky has introduced its own Rockstar Edition in race team colors, and it also provides a look ahead at the production bike that will be introduced next summer. In Husqvarna’s case, last year’s special edition was rewarded with an AMA Supercross Championship, so now the Rockstar Edition bears a big number one in celebration.

KTM 450SX-F FACTORY EDITION
One year ago the Factory Edition arrived with a new frame, new bodywork and a new head, so we didn’t expect too many changes. This time around, it still got a few surprises. The rod, piston and rocker arms are all new and said to promote a more free-revving motor. The fork has a number of internal changes and is now called the WP Xact. It’s not radically different from the AER 48; it still has an air chamber in one leg and all the damping functions in the other. The bike comes with a titanium Akrapovic slip-on silencer.

One of the most interesting features of the new bike is the machined, anodized triple clamp, which is beefier than the standard set. The clamping area is more precisely machined, which makes it more forgiving of improper torquing practices. Do you use a torque wrench when you clamp your fork tubes in place? If you don’t, you’re in the majority, but over-tightening the lower clamps can drastically inhibit fork action. The new clamps won’t forgive gorilla mechanic habits altogether, but you can get away with an extra Newton metre or two. Another interesting aspect of the triple clamp is that you can alter the offset. The standard position is 22mm of offset between the centerline of the steering stem and the fork tubes, and, with a little work, you can change it to 20mm. This doesn’t require a press or drastic measures; the stem is actually bolted in place.

There’s a big bling component for the bike as usual. At the top of the list is the orange frame. It also has orange-anodized hubs and sprockets, upgraded D.I.D Dirt Star rims, a holeshot device, race team graphics, a ribbed seat cover with a Selle Dalla Valle logo, a disc guard, a composite skid plate and a number of cool little bits. The bike sells for $11,099, which is $1200 more than the standard edition. There will be 500 imported to the U.S. 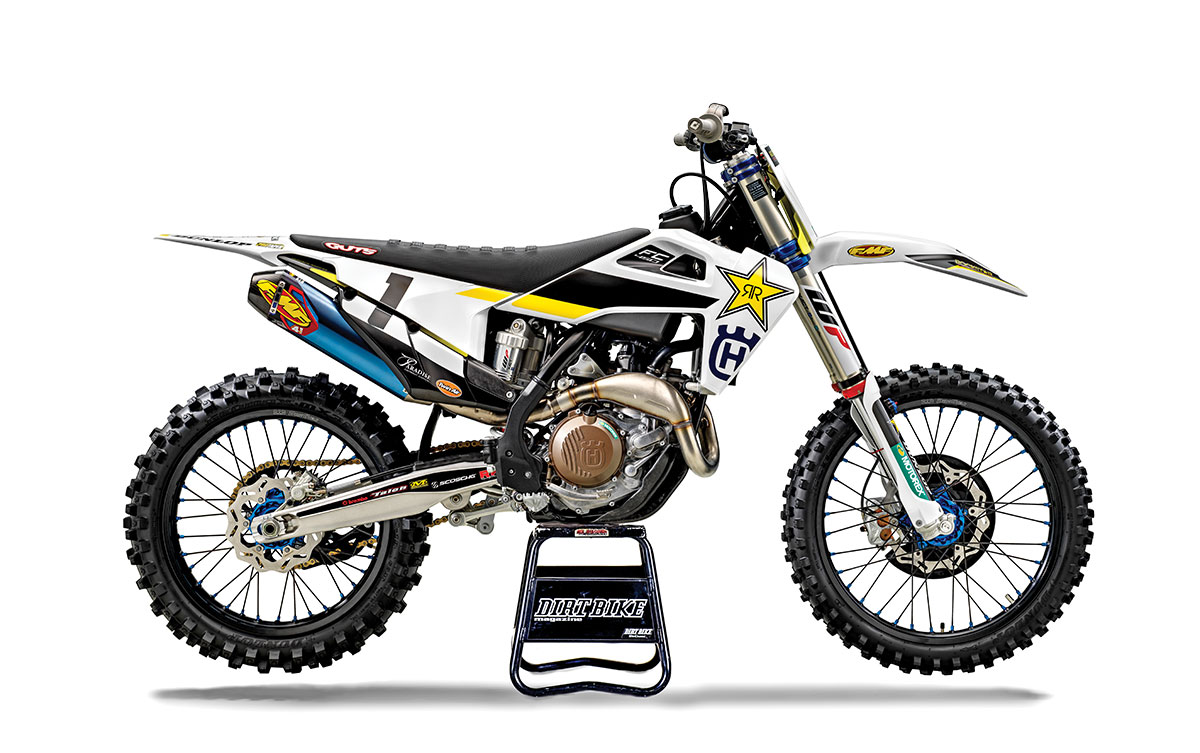 HUSQVARNA ROCKSTAR EDITION
It won’t surprise anyone to hear that the Husqvarna Rockstar Edition and the KTM Factory Edition are very similar motorcycles. The two bikes share the same frame, engine and suspension. That means the Husky gets the same internal updates to the rod, rocker arms, piston and suspension. It also gets the machined triple clamp with the reversible stem, except this one is in blue. The one item that is exclusive to the Husqvarna Rockstar Edition is the FMF Factory 4.1 titanium slip-on exhaust, as opposed to the Akrapovic on the KTM.

The look is, of course, different. The Rockstar team has a number of its own sponsors beyond the energy drink company. Rekluse is noted on the graphics, as well as Paradise Chevrolet, Schoshe, RK and Talon. It doesn’t actually have Talon wheels, a Rekluse clutch or an RK chain, but that’s what Jason Anderson uses. Husqvarna does have a number of components that are different from KTM’s, most notably the Magura hydraulic clutch and the ProTaper handlebar. Just like the standard model, the Husqvarna Rockstar Edition uses a composite subframe and airbox.

Rockstar bling is just like Factory Edition bling, except in a different color. The bike has a holeshot device, anodized hubs (in blue), upgraded D.I.D Dirt Star rims, a ribbed Guts seat cover, a composite skid plate, a floating front rotor and a disc guard. Under it all is the single-overhead-cam motor that got a more compact head in 2019. Just like the standard model, it has a handlebar switch that lets you choose between two maps, activate launch mode or use traction control. The Rockstar Edition will sell for $11,199. 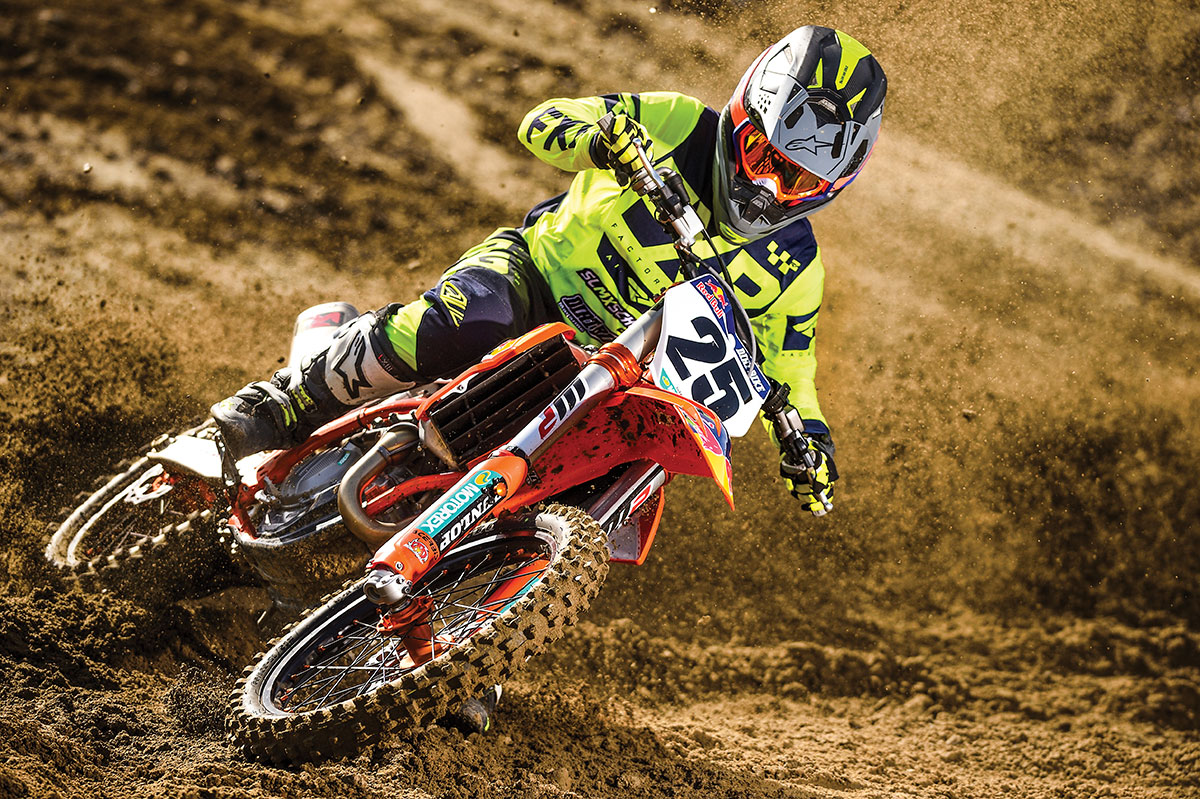 STUFF WE RECOGNIZE
In our 2019 450 motocross shootout, the Husqvarna FC450 and KTM 450SX-F finished in a virtual tie. They have since 2014. That isn’t to say that they’re identical or that riders can’t tell the difference. Nothing could be further from the truth. We have found, however, that the differences don’t add up to advantages or disadvantages on the track.

What both bikes do extremely well is produce smooth, evenly metered power in huge quantities. They are both very fast motorcycles that don’t necessarily feel that fast. No other 450 motor makes power so manageable. In fact, both were criticized for feeling too sleepy off the bottom. Now, the Factory Edition and the Rockstar Edition have recaptured a little of that old bark. We can’t say if it’s the piston, the exhaust or any of the other changes, but they both have more snap than their production counterparts. Of the two, the Husqvarna seems to have gained the most. It’s also the loudest. In the big picture, though, the two Austrian bikes are still much mellower than the Honda, which remains the class horsepower king and, not surprisingly, one of the most difficult 450s to ride. 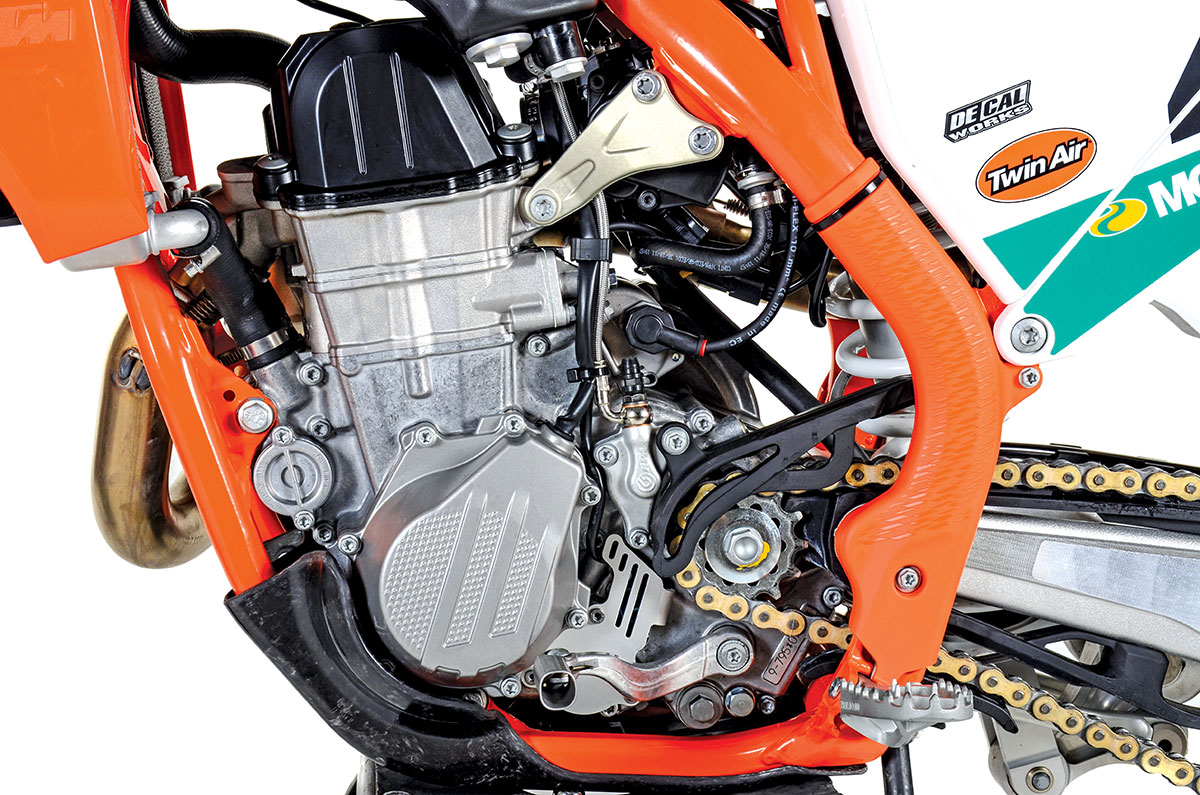 KTM and Husqvarna also gained ground in the handling department. The most common complaint for 2019 was that the new frame was stiff and harsh. The WP AER 48 fork, as much as we like it, didn’t do enough to smooth over the little rapid-fire impacts that get transferred directly to your hands. Both special models are slightly plusher in that department. There are no changes to the frame, only to the fork and triple clamp. That might mean the frame was taking some heat that it didn’t deserve. 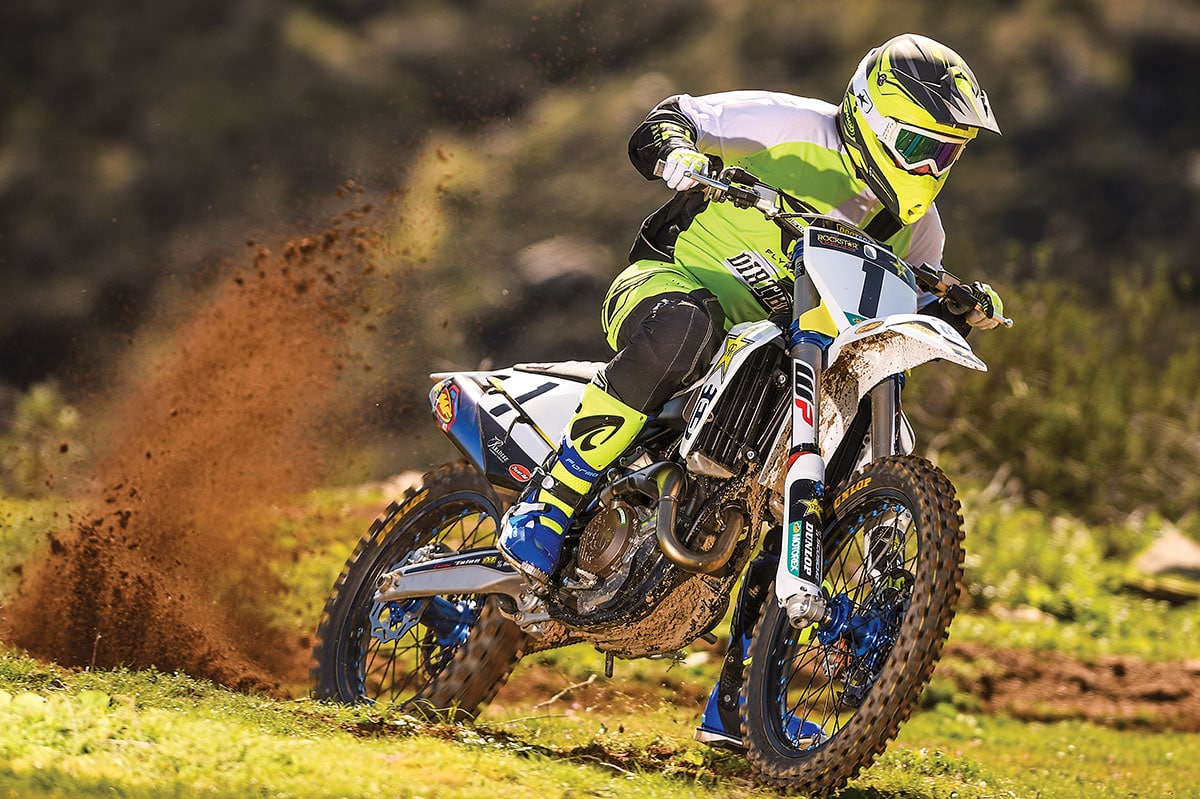 TRIPLE CLAMPS, OFFSET AND TRAIL
We spent a fair amount of time comparing the two different steering stem positions. We have to say up front that most people don’t understand what changes in offset can and can’t do. They often confuse offset with steering head angle. Not the same. When we talk about triple-clamp offset, we’re referring to the distance between the steering head centerline and fork-leg centerline. That affects the trail, which is the distance between where the steering head centerline hits the ground and the exact center of the front tire’s contact patch. The reason that trail is important is plain to see when you push a shopping cart or a dolly. If the castering wheels didn’t have trail, they wouldn’t caster. You would have to reach down and physically point the wheels rather than just push the cart where you want to go.

With that in mind, remember that less offset means more trail. When the offset is changed from 22mm to 20mm, an engineer might expect the bike to have more hands-off stability. But that’s not what our rider reported. He said the bike “turned better” in the tacky dirt at Fox Raceway. What’s the definition of “better”? In this case, it meant the front end got better traction and stayed in the ruts. Other riders who tested at other tracks said they preferred the stock setting. The truth is that 2mm isn’t enough difference to make riders definitive about their responses. Most said the bike felt different, but once again, we found that different doesn’t always equate to better or worse. For the Factory Edition and the Rockstar Edition, the adjustable offset just gives you something to try when you’re troubleshooting a specific problem.

GET ’EM WHILE YOU CAN
Both bikes should be available now through regular KTM and Husky dealers. They sell out quickly in places like Southern California, but if you can’t find one in your area, check around. It seems there’s always a dealership that has one somewhere. Are they worth the extra cash? That depends. Sometimes it can be pretty sweet to have a bike from the future.