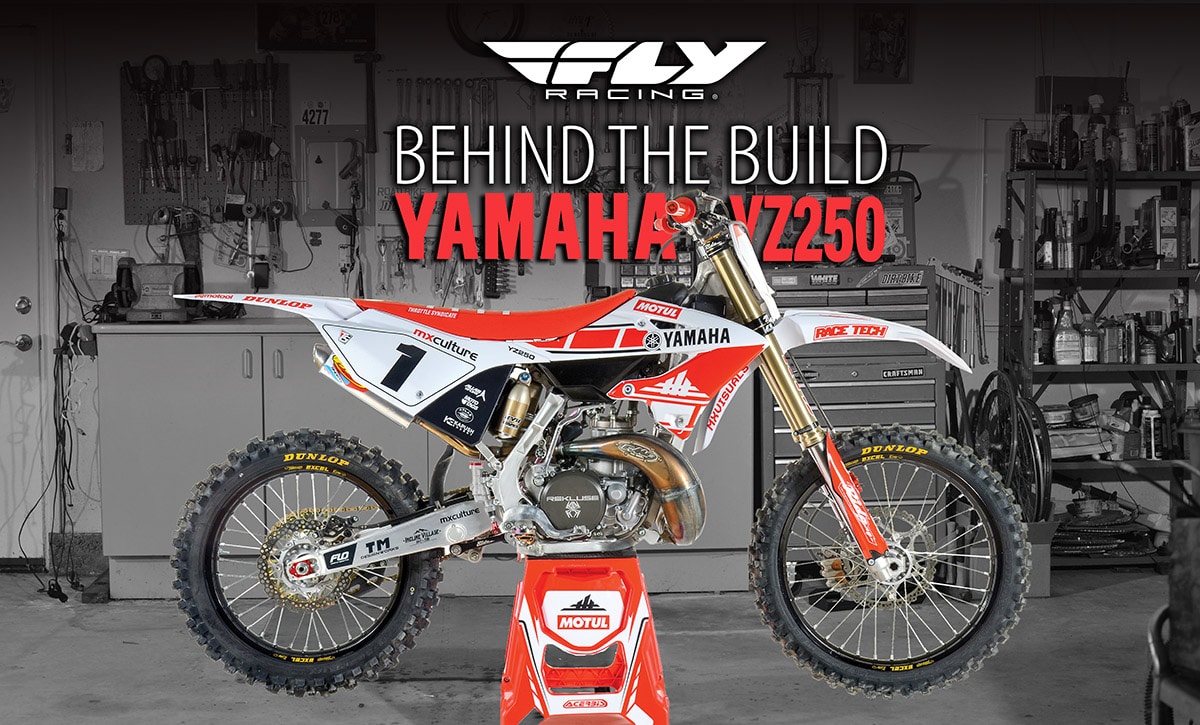 When you run a race team, surprises are always just around the next corner. Ryan Clark knows this. He started Team Solitaire back in 2003 when he was racing professionally. Ryan now runs the team with partner Chris Elliot, and when they made the decision to have both Robbie Wageman and Ryan Surratt compete at this year’s Two-Stroke MX World Championship on Easter weekend, they couldn’t anticipate what type of surprises they would encounter.

In West Coast SX, the team rides Yamahas. No problem, because Yamaha is one of the only Japanese manufacturers who still make two-strokes. Robbie Wageman just happened to be the defending Open-class two-stroke champion, so he would ride the YZ250 and Ryan Surratt would pilot a YZ125 in the Small Bore class. Typically there are no SX scheduling conflicts. The AMA had never scheduled a race on Easter weekend, and it was far enough into the season that it would probably be an East Coast round anyways.

Plot twist—an SX round was scheduled for that weekend this year, and it was an east-versus-west shootout. Robbie Wageman was inside the top 10 in the West Coast points standings, and if he didn’t attend, he would lose valuable championship points. Most teams would have pulled the plug on the extra two-stroke race at this point, but not Team Solitaire. Ryan and Chris had made previous commitments, and they weren’t going to back out on them. Wageman would race SX, and Surratt would pull double duty at the Two-Stroke MX Championship.

With the race weekend logistics figured out, the team didn’t want their two-stroke effort to blend into the crowd. They decided to go with a retro theme, paying respect to the late-’80s/early-’90s red-and-white Yamaha two-strokes piloted by legends of the sport like Kieth Bowen, Doug “The Dr.” Dubach and Damon “The Beast From the East” Bradshaw. All the team sponsors got into the mix, and Leatt even produced special one-off sets of gear that included matching helmets. The crew at Throttle Syndicate also went to the drawing board to come up with new graphics for the occasion.

When you think of Race Tech, the first thing that comes to mind is probably not performance engine work. Race Tech does more than just suspension. A couple of years ago they invested huge into machines and personnel, resulting in a fully functional engine department.

The team decided to keep both the YZ125 and YZ250 at stock displacement, working off of the OEM components. Their goal was to make the stock platform competitive with the big bores and exotic builds they would be competing against.

The spirit of two-stroke racing thrives on affordability, so they didn’t want to replace OEM parts with something less reliable, and big-bore kits can get expensive quickly. Race Tech performed cylinder and head mods on both machines, the OEM reed cage was replaced with Moto Tassinari VForce4 units, and the only other internal modification was the addition of Rekluse TorqDrive clutch packs that allowed for a more precise clutch adjustment. External bolt-on items contributing to the overall engine performance included an FMF Factory Fatty pipe, FMF Shorty silencer and Pro Filter high-flow air filter. With the engines receiving significant amounts of modifications, they would now run on ETS PX11 race fuel mixed with Motul 800 2T premix, and, of course, the jetting specs inside the OEM Keihin carburetors were updated. 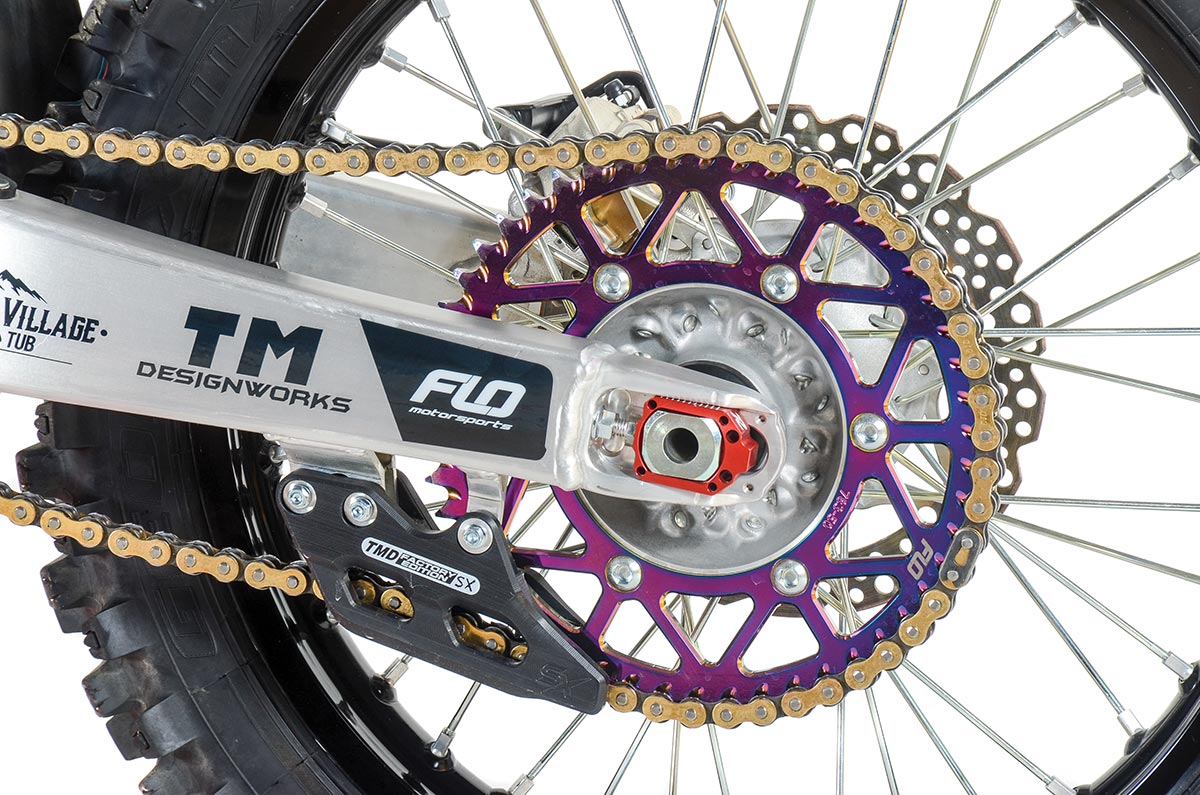 With horsepower handled, the team put their focus into making Ryan Surratt comfortable on the bikes. Unlike most bike builds, this portion of the build was a lot easier than normal because they already had a working baseline knowing what Surratt likes on his Supercross race bike and what they use to make those race machines bulletproof for a professional-level rider. Those items included triple clamps, bar mounts, performance links from Ride Engineering with ODI RC bend handlebars, Emig V2 Pro lock-on grips, and a laundry list of items from FLO Motorsports.

Stapes Racing handles all the suspension needs for Team , on the Yamaha YZ250F four-strokes raced in Supercross so that knowledge was put directly into the setup ran on both the YZ125 and YZ250. With minimal amounts of testing days before the event, the team worked with Surratt to dial in the suspension settings to make him comfortable on both bikes.

Testing concluded Thursday evening, and first thing Friday morning the team started putting the final pieces of the puzzle together, transforming the seemingly stock Yamaha two-strokes into white-and-red race machines. Throttle Syndicate produced the complete custom graphics and seat-cover combinations used, and those were mounted up on all-white Acerbis plastic kits. The OEM wheels come with blue rims, and those were replaced by black Excel Signature Series rims and then wrapped in Dunlop MX33 tires. With the last decals placed, our studio photo session started at 7 p.m. Friday night—yes, Friday night, only hours before the Saturday event.

When the dust settled at this year’s Wiseco Two-Stroke MX World Championship, Team Solitaire rider Ryan Surratt would stand on both the Open and Small Bore-class overall championship podiums with extremely solid third-place finishes. Surratt was the only rider on the Open-class podium running a 250cc-displacement engine; both the winner and runner-up both had 300cc configurations. He was again the only rider on the small-bore podium utilizing a 125cc engine; the winner and runner-up both had 25cc advantages using GasGas and Husqvarna 150cc machines. That definitely says something for all the companies involved getting every ounce of performance possible out of both machines, and Surratt for putting his head down fighting for every position.

The overall retro theme to the builds came together way better than we ever expected, and Leatt did a mind-blowing job matching the on/off custom gear. Usually, we are the ones building and racing the projects featured inside the pages of Dirt Bike Magazine, but it was definitely a nice change of pace to work with Team Solitaire. Everyone involved had great positive attitudes, even when things weren’t going all that smooth. We can’t wait to see what they have in store for next year’s event.