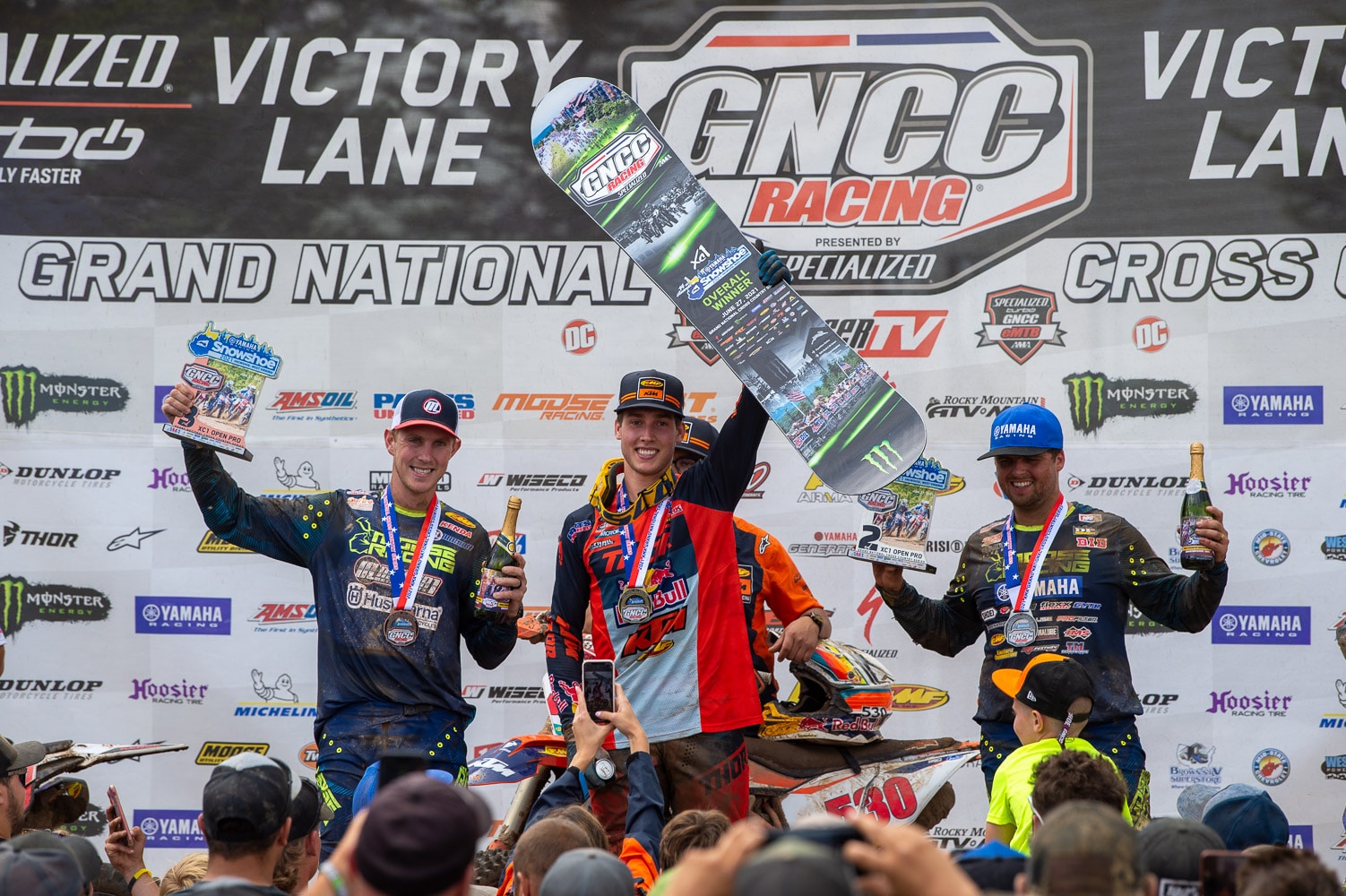 The Grand National Cross Country (GNCC) Series presented by Specialized, an AMA National Championship, concluded its ninth round of racing at the Yamaha Racing Snowshoe GNCC in Snowshoe, West Virginia on Sunday, June 27.

FMF/TKM Factory Racing’s Benjamin Kelley would come through to earn his second win of the season and conquer Snowshoe Mountain. Kelley found himself running third throughout the first couple of laps, but he would make the pass for the lead on the fourth lap and hold that lead until the checkered flag flew.

Earning second at round nine was AmPro Yamaha’s Steward Baylor. Right off the start Baylor had hoped to grab the early lead, but he would slide out on the pavement start at the first turn. Baylor would move into the lead on the second lap but would be unable to hold off Kelley as he applied the pressure. Baylor would hold onto second, coming through 30 seconds behind Kelley.

Magna1 Motorsports/Husqvarna’s Jordan Ashburn grabbed the early lead, holding onto first for the first lap. Ashburn continued to run at the front of the pack and battle with Baylor and Kelley. As they came through the finish Ashburn would come through to earn his fourth podium finish of the season.

Coming through fourth on the day was FMF/KTM Factory Racing’s Josh Toth. Toth had a consistent day running in fourth for the entire three-hour race. Toth remains sixth in the points standings as the series will kick back off in September. KLM Milwaukee GASGAS’s Grant Baylor made his way to fifth in XC1 after starting out the day in seventh.

Rockstar Energy Factory Husqvarna Racing’s Thad Duvall fought back to finish the day sixth overall in his home state of West Virginia. Duvall started out the day in eighth and steadily worked his way up through the pack. Coastal GASGAS Factory Racing’s Ricky Russell crossed the finish line seventh overall on the day after battling early on in the race in the top five.

AmPro Yamaha’s Layne Michael maintained the ninth place position in XC1 throughout the duration of the race. Rounding out the top 10 in the XC1 Open Pro class was RedBull/MSC Sherco Racing’s Benjamin Herrera.

In the XC2 250 Pro class it was Coastal GASGAS Factory Racing’s Jonathan Girroir coming through to earn his sixth win of the season. Girroir made the move into the lead after running in second for the first two laps. Girroir continues to lead the championship standings as the series heads into its summer break.

Earning his first XC2 podium finish was 760 Motorsports/JDP Suspension/FXR’s Ben Nelko. After coming through in 13th on the opening lap, Nelko put his head down and pushed for the rest of the race. Nelko steadily moved through the pack at Snowshoe and put himself in a great position during the last lap where he overtook second place just miles from the finish line. After missing three rounds due to an injury Enduro Engineering/Kenda/XC Gear’s Ryder Lafferty came through to earn third in the XC2 class.

Grabbing the early lead in the FMF XC3 125 Pro-Am class was Magna1 Motorsports/Husqvarna’s Jonathan Johnson. Johnson would continue to lead the way in the class for the duration of the three hour race. Crossing the line in second was Enduro Engineering/Husqvarna/FXR’s Jake Froman. While Marionville Powersports/Enduro Engineering/Fly Racing’s Noah Clark rounded out the top three in the FMF XC3 class.

AmPro Yamaha’s Rachael Archer battled back at Snowshoe to earn the WXC class win and close the points gap to just two behind BABS Racing Yamaha’s Becca Sheets. After holding the lead for the first two laps, Magna1 Motorsports/Husqvarna/Rockstar Energy/Moose Racing’s Tayla Jones would come through to finish second on the day in West Virginia. KTM Canada/FXR Moto/SRT Off-Road Racing’s Shelby Turner battled for the last spot on the WXC podium atop Snowshoe Mountain. This was also Turner’s first-ever WXC podium finish.

In the youth race it was Cole Forbes coming through to earn the overall and YXC1 Super Mini Sr. class win. Nicholas Defeo and Thor Powell came through to round out the top three overall and in the YXC1 class. Peyton Feather earned the YXC2 Super Mini Jr. class as Robert Weiss and Ryan Amancio finished second and third in the class. Ryder Sigety earned the 85cc (12-13) class win, while Mason Raynor took the 85cc (7-11) class win. Nash Peerson and Hunter Hawkinberry took home the two 65cc class wins. Ruby Fustini earned the Girls (8-15) class with Chance Mayfield earning a win in the trail rider class.