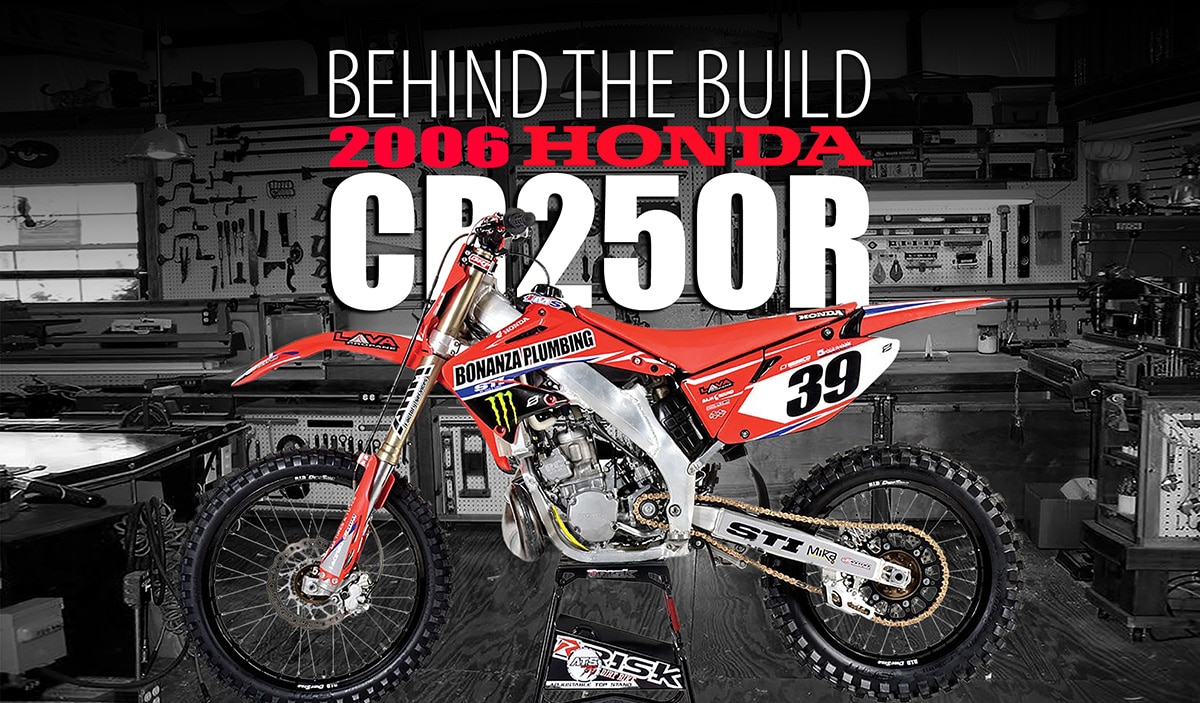 Ricky Dietrich has experienced a lot of different types of racing in his career, ranging from WORCS to MX Outdoor Nationals, and has had success racing all over the world, but all that was primarily done on a four-stroke. Dietrich is now a member of the SLR Honda off-road team on a four-stroke. We decided to team up with SLR Honda team owner Mark Samuels to build a machine for Dietrich to race at the Wiseco Two-Stroke World Championship at Glen Helen Raceway. 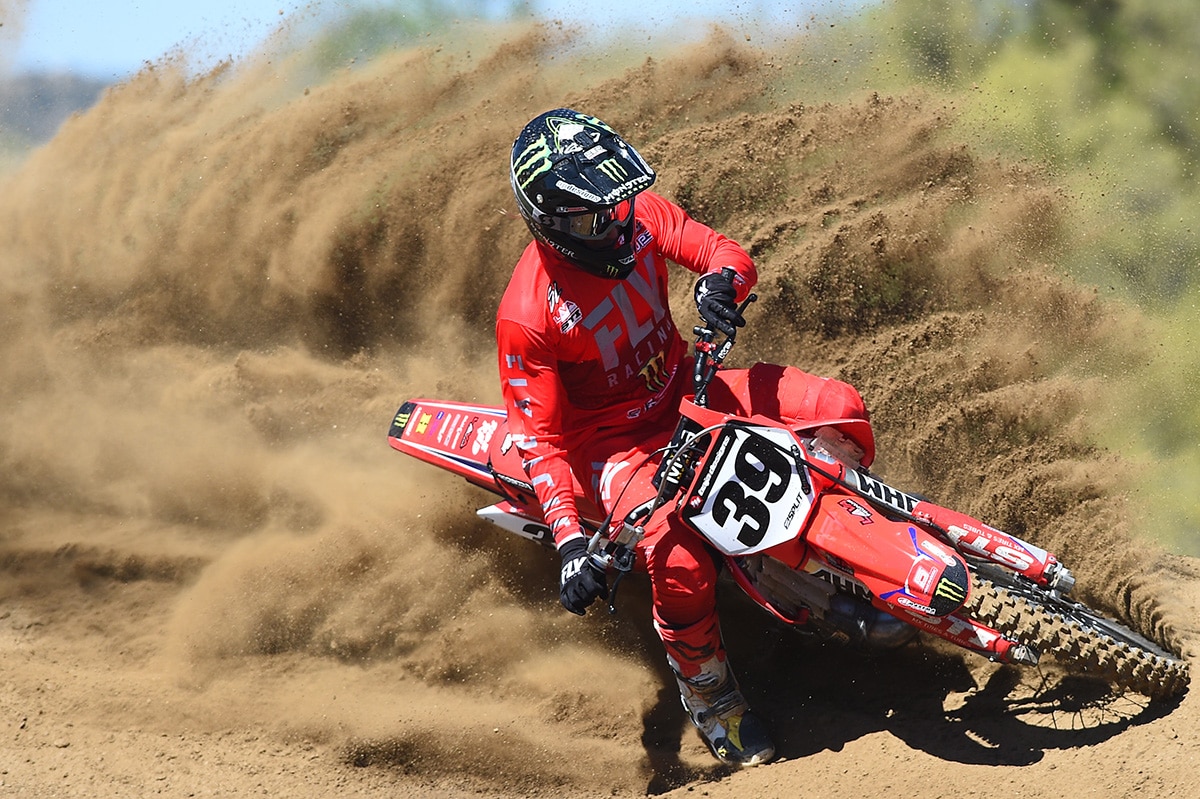 Since Honda stopped production of two-stroke-model MX bikes over a decade ago, the team had to go on a mad search for a bike to use. Turns out a friend of a friend was willing to let the team use his personal machine. As with most older-model builds, the bike was torn down completely and inspected. This bike was actually in pretty good condition overall and didn’t need hours of rebuilding. Chassis-wise, all the pivot points were cleaned and the bearings greased up. A couple bearings and seals were replaced using kits from All Balls.

While the chassis was getting freshened up, the suspension components got dropped off at AHM Factory Services in Anaheim, California. Brandon and his crew are a big part of the SLR Honda team’s racing program—both in the USA and Mexico. The suspension was completely rebuilt and re-valved to Ricky Dietrich’s personal specs. Wheels typically take tons of abuse, so on a used bike they often need some attention. AHM worked magic with the stock wheelset. They applied a bronze-colored Cerakote to the hubs, replaced the bearings and laced up a set of D.I.D Dirtstar black rims using oversized stainless steel spokes and alloy nipples. The new wheels got wrapped in STI Tech-2 Pro tires and heavy-duty tubes instead of the foam tube inserts the team normally runs.

The powerplant received a lot of attention, with the bike being over 12 years old and the maintenance schedule unknown. Mark and the team decided to rebuild both the top and bottom ends. This was done using a Wiseco Garage Buddy rebuild kit. Each kit comes with a complete crank assembly, main bearing, bottom-end gaskets, seals, top-end gaskets, piston, ring, circlips, wrist pin and a wrist pin bearing. About the only thing Wiseco doesn’t supply in this kit is a mechanic to install everything. With the engine apart, the cylinder was sent to Varner Racing, where Honda two-stroke engine guru Terry Varner worked some magic porting the cylinder and milling the head, giving Dietrich’s CR250 that perfect amount of squish. Varner also mentioned we needed to run the single-ringed piston from Wiseco. We lucked out there, because that is what comes in the Garage Buddy kit. We think Wiseco knows all of Terry’s secrets.

Another major upgrade internally was the addition of a complete Hinson Billetproof clutch and CNC-machined clutch cover. Once the engine was assembled, we bolted up a Moto Tassinari V-Force 3 reed cage and a complete exhaust system from Pro Circuit that featured its works-style expansion chamber and R-304 Factory Sound stainless steel shorty silencer. This machine would now run on race gas only!

When it came down to styling on the CR250, Mark and the SLR crew wanted to keep the classic lines in place but add some racing flair. To do that, all the OEM plastic was used except the front number plate, which was replaced by a Cycra Stadium plate with a slightly different shape that wraps around the forks. Split Designs does all the SLR team graphics, so they came up with a custom kit that gave the CR an updated but clean factory look.

HOW DOES IT RIDE?
This bike is flat-out fast! It barks right off the bottom and makes power all the way to the top. (Ricky actually ripped a killer holeshot in one open pro moto going up against built 300cc and 500cc machines.) What really surprised us is how neutral the overall setup is. The rider cockpit is something that just about all our test riders felt comfortable in without making any changes. Suspension was another thing that had us scratching our heads. We have had the pleasure of riding many top-level pros’ bikes throughout the years, and more often than not, we hate them because the suspension is so stiff that we have to go back and pick our teeth up off the track. Not so with this one. Dietrich’s machine absorbs the bumps instead of pounding through them; we can even say it’s on the plush side. AHM did a great job on not only rider comfort but also balance. Dietrich did mention he did minimal testing on the bike before the race and would have probably gone a little stiffer just to have it ride higher in the stroke to reduce the amount of movement. Overall, this machine is more like a project we would build for ourselves than a bike built for a fast guy to race. 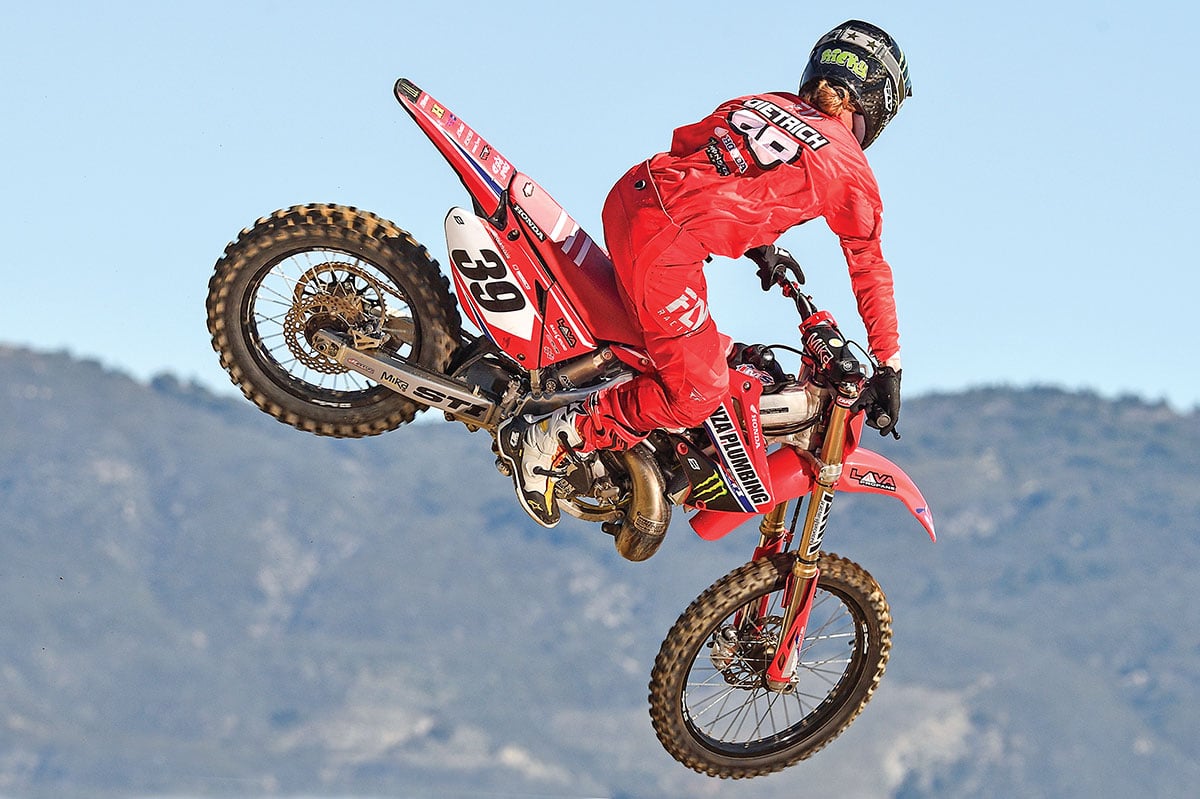