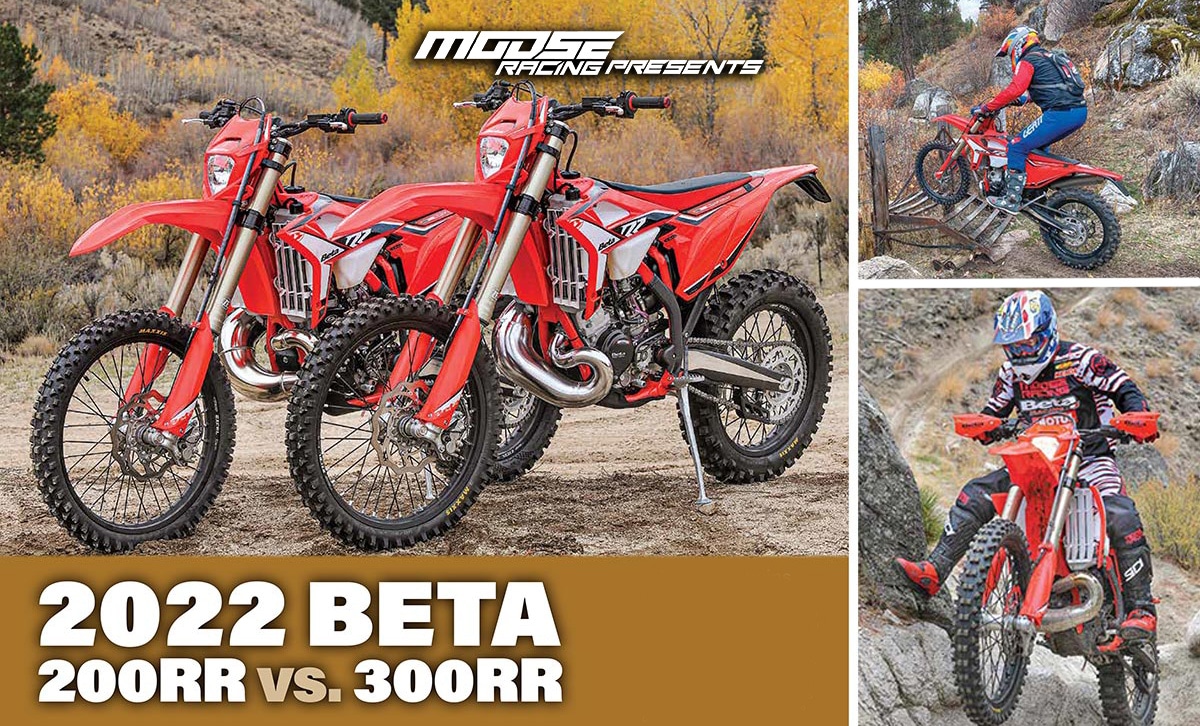 We had a great opportunity to ride the 2022 Beta 200RR and the 300RR while up in Idaho with Beta’s Rodney Smith. What follows here is a two-day test of the duo, so there’s nothing long-term about this; it’s basically a riding comparison between the two machines. First, let’s look at both machines, as they have been heavily updated for 2022.

Starting with the 300RR, Beta made a big push to upgrade the 300RR models, and this includes a new engine configuration that offers a different bore and stroke and an all-new diaphragm clutch. A new larger-bore cylinder, a new piston, crankshaft, and a new power valve all focus on improving the power delivery and torque. The cylinder head is also new and has been redesigned to work with the updated cylinder. Beta changed the diameter in the silencer, targeting improved top-end performance and tractability. The 300 has electric start, internal counter balancers to lessen vibration and is oil injected electronically. In the suspension department (and this is identical for both machines), the Sachs rear shock has new compression damping settings with independent high- and low-speed damping rates, providing the rider with adjustability for each setting. The Sachs fork has also received updated internal valving settings to further enhance the plushness. Also new to the fork are the tubes, which use a new anodizing process that improves the surface hardness and corrosion resistance of the tubes.

Also common to both machines are the easy saddle removal (no tools required), quick-access Twin Air filter, aluminum bulge handlebars that are six-way adjustable, and a digital meter that reveals speed, average speed, maximum speed, total miles, trip meter, hour meter and battery voltage, and that’s where the low-injector-oil light is located. Both machines have Nissin brakes with a 260mm disc up front and a 240mm disc in the back. Each has two power modes controlled by a switch attached to the frame by the steering head that alters the ignition curve. The two modes are depicted by a sun (for optimal conditions) and a raining cloud (for wet conditions).

The Beta 200RR is substantially lighter than the 300RR because it shares the smaller and lighter engine and chassis platform with the 125RR. The bore and stroke take it up to 190.2cc. It comes fit with electric start and oil injection. The 200RR weighs 14 pounds less than the 300! The 200 is carbureted by a 36mm Keihin PWK that feeds into a V-Force reed assembly. The oil injection is electronically controlled and holds 650cc of two-stroke crude. It comes with a six-speed, wide-ratio transmission and an O-ring chain, and the hydraulic clutch activates via a Brembo master cylinder. Both the 200 and 300 fuel tanks hold 2.5 gallons of gas. 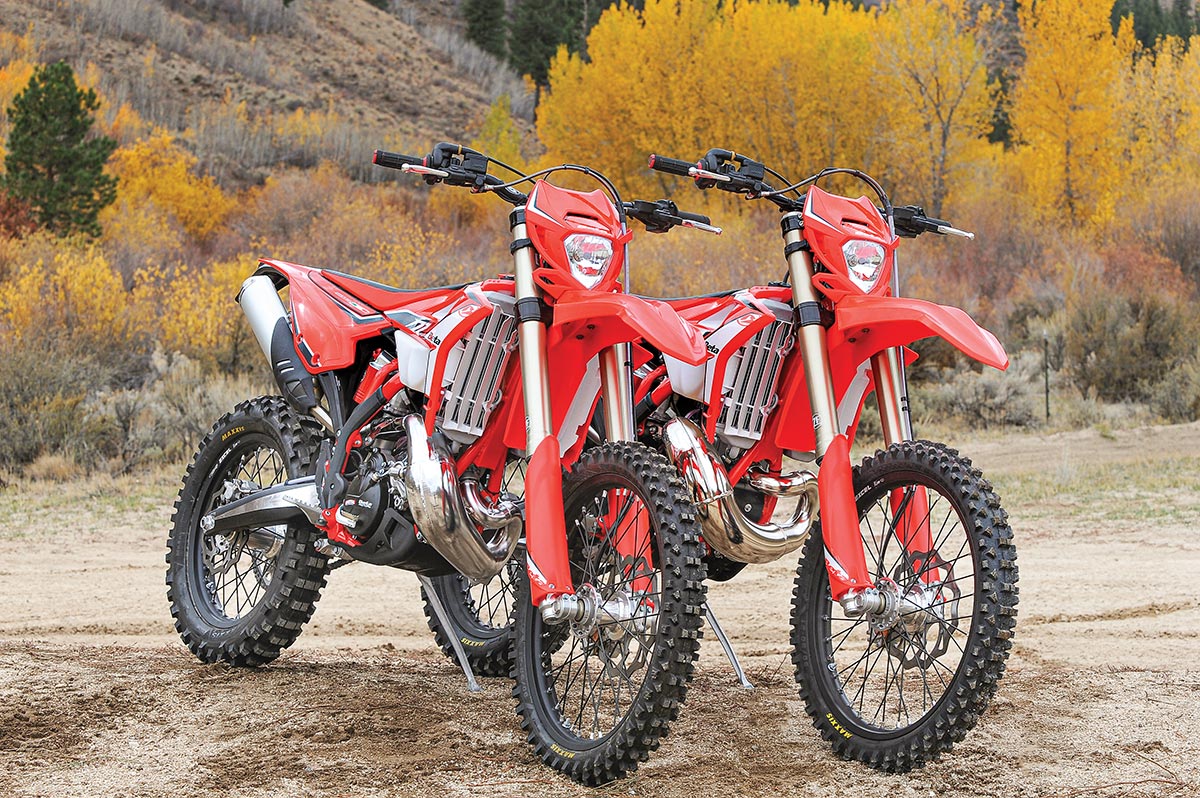 I was pumped to get up to Boise and test the new Betas. I personally ride a 2019 KTM 300XC-W TPI that has been carefully massaged in all the right places, and this was my comparison tool. Conditions were perfect in the hills and mountains outside of Boise, with an overnight rain creating dust free, chocolatey dirt. The trail went from high-speed ridge trails to technical single-track with attention-grabbing side-hill off-cambers and a great assortment of rock gardens—perfect testing conditions. I started the day on the 300. The ergos were suited for my 6-foot frame with a straight flat feel to the seat/tank area. Body movements were never hampered, and the bar bend was very comfortable. The Beta cockpit is borderline cramped, and I believe taller riders would need adjustments to the bar and peg height.

The hydraulic clutch had a medium-heavy pull. The Nissin brakes were strong and progressive. The button start was flawless, and the jetting was dead on for our 3500- to 4500-foot altitude. The transmission was a bit stiff at first (bike was brand new) but provided solid shifting once some time was put on it. The best word to describe the suspension was “balanced.” I really liked the fact that neither end overpowered the other. This balanced chassis creates confidence when pushing at higher speeds. Turning is positive, although I did need to remind myself to keep my head forward to place some weight up front on the machine. The fork and shock action are similar; they’re not plush, but they are not overly damped to deflect. I weigh 178 pounds without gear, and in the rocks the initial part of the stroke gives enough to allow a confident pass through the nasties, but past the very initial travel it could have a smoother stroke at both ends. The solid, balanced feel is no doubt assisted by the spring rate, which keeps both ends up in the stroke and prevents any wallowing.

The motor is impressive, enhanced greatly by the spot-on jetting specs. The 300 idles down smoothly without stalling, chugs in low-rpm higher gears and boogies on top. My KTM has more mid meat, but it also has a high comp head and special ECU. The silencer really reduced the decibel level and provided a great two-stroke song, but it’s not spark-arrestor equipped. The Maxxis tires were without fault, but conditions were absolutely perfect, so the jury is still out on how they perform in dry conditions. Overall, I have high praise for the new Beta 300RR and could easily see myself riding Italian red rather than Austrian orange. 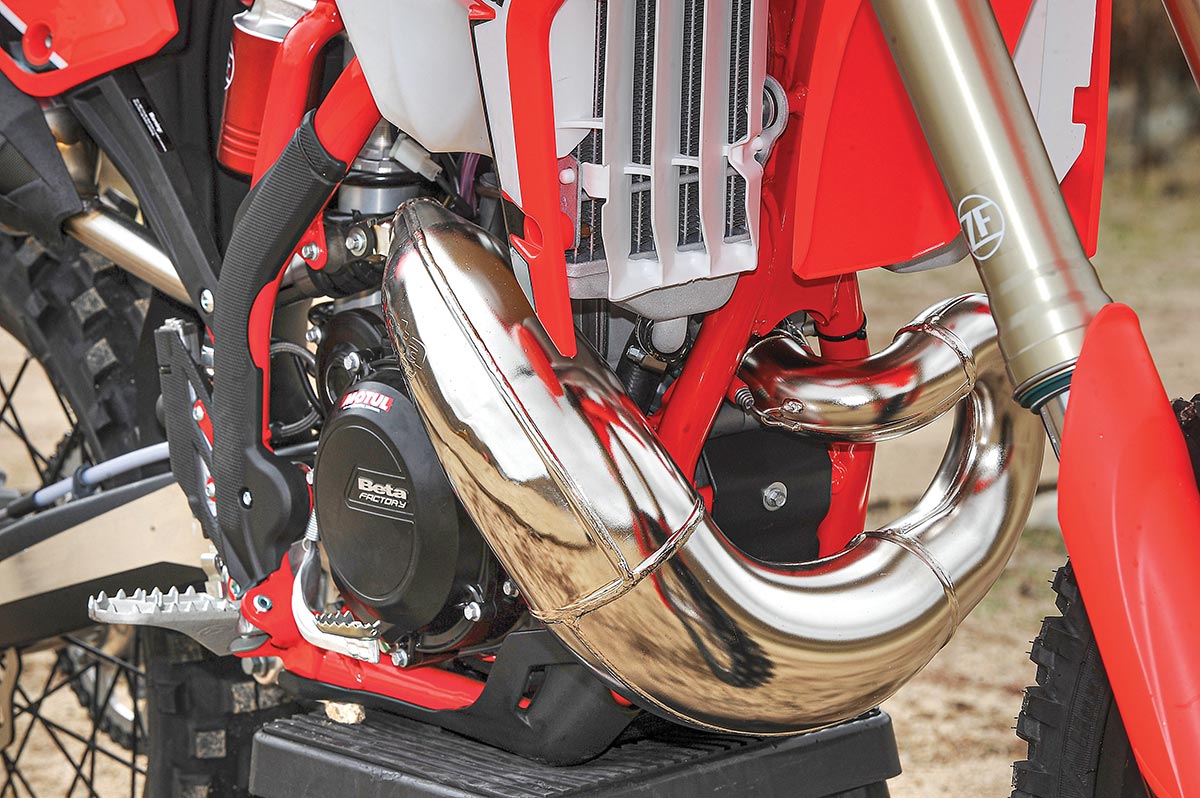 With an all-new powerplant, the 300RR has a larger bore, a new diaphragm clutch that’s hydraulically actuated, a tidy plastic skid plate and the normal big-bellied 300 expansion chamber. It comes with a map switch that offers Rain and Dry modes.

I must admit, I was so stoked on the 300 that I was reluctant to switch to the 200 for the second half of the test; however, it’s been a long, long time since I was so impressed with a motorcycle. The 200 took all the positive chassis traits of its big brother but shaved off 14 pounds, and that diet turned it into an off-road dream bike. As on the 300, the ergos are well-placed with a super-flat seat tank area and comfy bars and controls. The same starting and killer jetting provide a super clean, responsive motor. Although you certainly notice the missing 100cc, it’s not as noticeable as you would think. The Beta engineers performed magic on the routing of the header pipe of the expansion chamber to provide as much low end as possible. This is what really distinguishes it from a light-switch 125cc powerband. You can actually lug it in third gear on flat, tight trails and she pulls with no complaints. Once past bottom, the 200 just sings into the mid/top band of power, providing surprising boost.

I didn’t spend much time swapping between the two power modes. The traction was too good, and I wanted full boost. The Rain mode calms things down and would probably be stellar in snotty, greased-up trails. The gearbox was well spaced, the clutch pull decent, the feel and engagement on the mark. But, it’s the lightweight flick-ability that puts a smile on your face. I honestly don’t know if I’ve ever gone that fast on long, challenging downhills. The confidence level is off the charts with the excellent handling manners coupled with light weight. It actually feels like you’re jamming downhill on a mountain bike rather than a dirt bike. As on the 300, the brakes were solid and the shifting a bit notchy, but the machine seemed thinner through the middle and easier to maneuver. In the end, I came away impressed with both offerings from Beta. They have created two out-of-the-box, off-road shredders. My only dilemma is trying to figure out which one to pick. 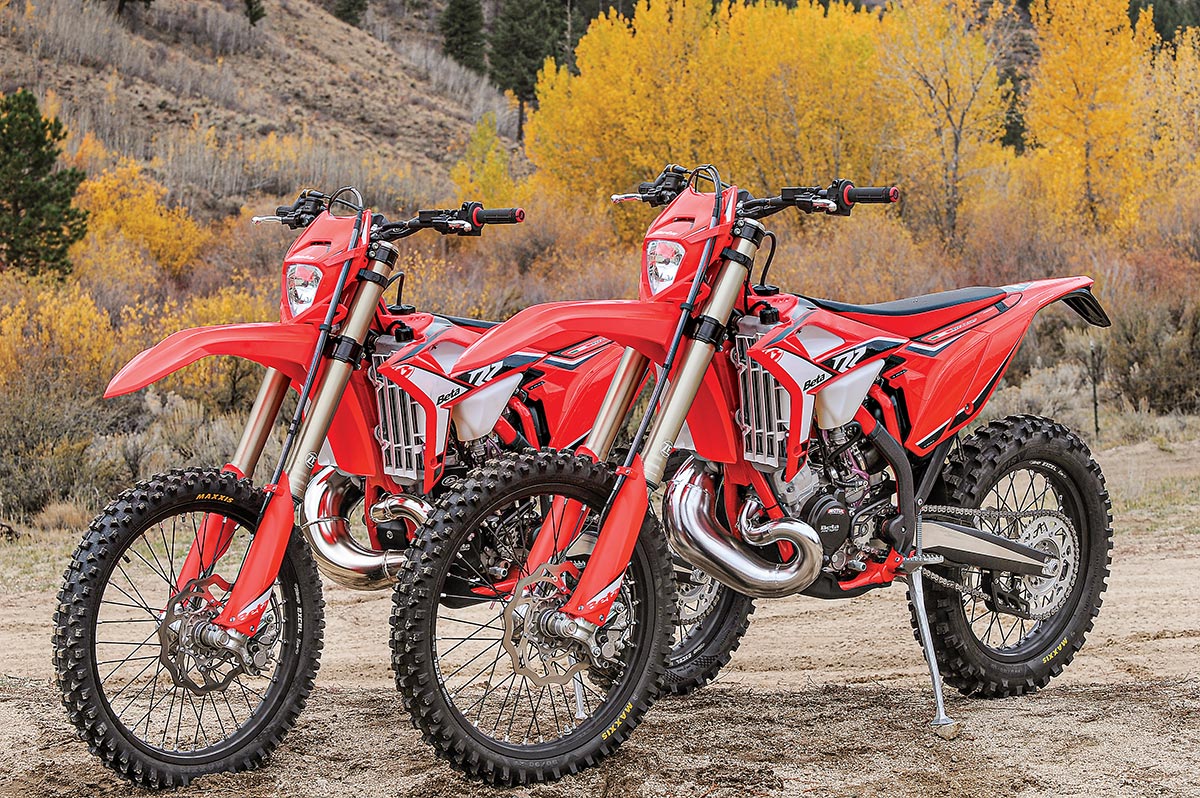