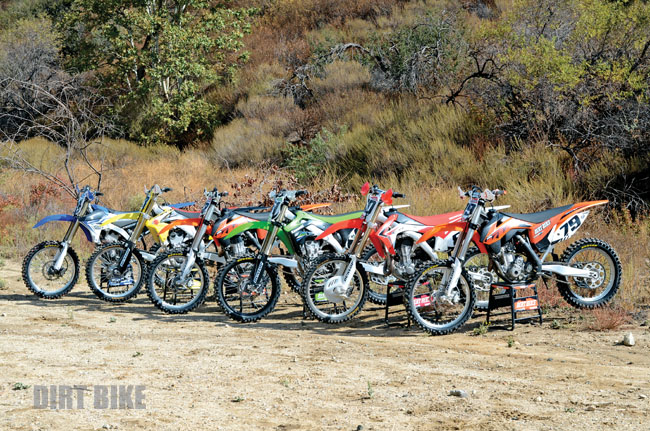 The point in throwing the 2014 450 motocrossers into a vat and pouring them into the off-road environment is…what’s the point? These machines are all serious track racers, and even the weakest—or, more to the point, least changed—has enough DNA to dominate a motocross course under the proper guidance. But, the reality is that few 450s are actually raced. More are ridden at practice tracks or used for play riding and exploring off-road.
With this mission statement of versatility, we require a bit more out of them than just ballistic power and suspension designed to flatten the biggest of leaps. Tractability and a broad powerband are key, resisting flameouts at lower speeds is mandatory, and suspension adjustability is crucial. The majority of these machines haven’t changed all that much since last year, and all need a little love to get them into a healthy off-road mindset.
We’ve decided to attack this year’s 450 motocrossers-gone-hybrid with revised criteria. They were all put through an incredible and violent test on our long test circuit, where hills, hack, rocks, ruts, sand whoops and erratic speed zones demanded the most out of the machines. We evaluated them as is, identified their priorities, and ended with the overall potential of the motocrosser as a do-it-all machine. To make all the 450 MXers legal for off-road use, we installed spark-arrested, slip-on exhausts from Bill’s Pipes, DR.D, FMF, Pro Circuit, Slasher and Yoshimura. We also installed handguards to protect our mitts from everything the trails had to throw at us. So here goes.

KTM 450SX-F
As is: The KTM 450SX-F is the overall powerhouse of the group, making stellar power from bottom to top and with enough muscle to make your eyes bulge. The hydraulic clutch offers a smooth feel and superb engagement ability. The brakes are intense, the cockpit modular and the feel throughout has evolved into normalcy (a hard-fought battle). And, it has electric start!
On the less-than-stunning side are the weight and the suspension action. There was nothing we could do about the tonnage with our pedestrian budget, but the suspension lacks suppleness, even on a motocross track, and flat recoils when pushed into an off-road arena.
Priorities: Suspension is key here. We’ve had excellent results with both Precision Concepts and Pro Circuit valving/spring combos. The Precision WP suspension mods target smoother initial travel, yet the suspension stays up in the stroke, resisting diving and squat, and aids in traction. Pro Circuit’s mods were similar, though our settings seemed more compliant initially and a little softer through the middle. Both take the big hits superbly and are must-do mods if you want the machine to have an appetite for a versatile world.
The fuel tank is decently sized at 1.98 gallons, though IMS has an excellent 3.1 tank, and the bike could use a skid plate. TM Designworks has a minimalist plate and a full-coverage unit that are ridiculously strong. Exhaust-wise, there is an internal screen, but it is not a legal spark arrestor. The stock exhaust is too loud for real off-road, and there are two systems that can cure this problem: the Pro Circuit  and the FMF 4.1. Both systems offer a header with a canister or module that helps with sound and enhance bottom power. The rear mufflers are spark legal and help knock off some of the crack that all MX machines suffer with. Thankfully, both the Pro Circuit and FMF pipes come in stainless steel, which is critical for life in the off-road world.
Potential: There is no doubt that the KTM 450SX-F sits at the top of the heap. Power, starting, brakes, quality parts and adjustability offset some suspension groans that are totally fixable. The big question is whether it’s at the top by itself.

CHECKING IN WITH THOR’S ADAM CIANCIARULO