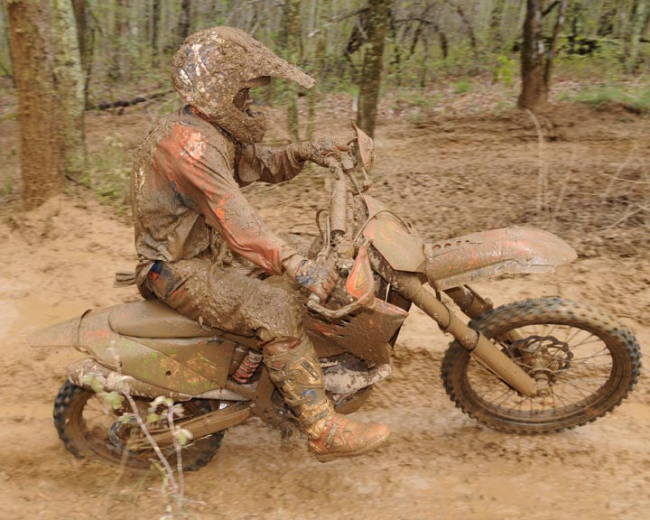 Hurricane Mills, TN – The Shock Doctor/KTM GNCC Team encountered their biggest challenge yet at the fifth round of the series – MUD!

It rained leading up to the race and it rained the day of the race. All said the course was a muddy mess. Kurt Caselli put his Shock Doctor/KTM up front early when he nailed the holeshot down the muddy start straight. He led for a short time before he was passed by two riders. He stayed inside the top three and was showing great speed and confidence. His teammate, Nate Kanney, was not as fortunate as his bike suffered a mechanical problem on the first lap due to too much water getting inside the motor. Kanney had to return to the pits where they fixed his KTM machine and put him back on the track.

As the race continued Caselli was still charging hard up front. Unfortunately, on the third lap Caselli’s bike ran into problems due to the challenging track conditions and he was only able to make the three laps before he had to pull out. His finish was solid enough to earn him 14th for the day. Kanney finished the race but could only charge up to 13th as he was down a lap from his problems at the beginning.

The Shock Doctor/KTM XC-2 rides of Kailub Russell and Cory Buttrick had slightly better luck than their XC-1 teammates. Russell was actually leading for a large part of the race but got stuck on a hill where many riders passed him before he was able to get rolling again. Meanwhile, Buttrick was 2nd off the start and was riding a great race when he DNF’d on the final lap due to mechanical problems from the mud. Despite his problems, he still finished 7th overall due to many other riders pulling out due to mechanical problems from the harsh course conditions. Russell was able to finish the race after pulling his bike out of the mud on the hill and finished a solid 3rd overall to maintain his Championship points lead.

Hepler and Hill out for Seattle Supercross