SHIREY SMOKES IT! | OPENING ROUND NATIONAL HARE AND HOUND | 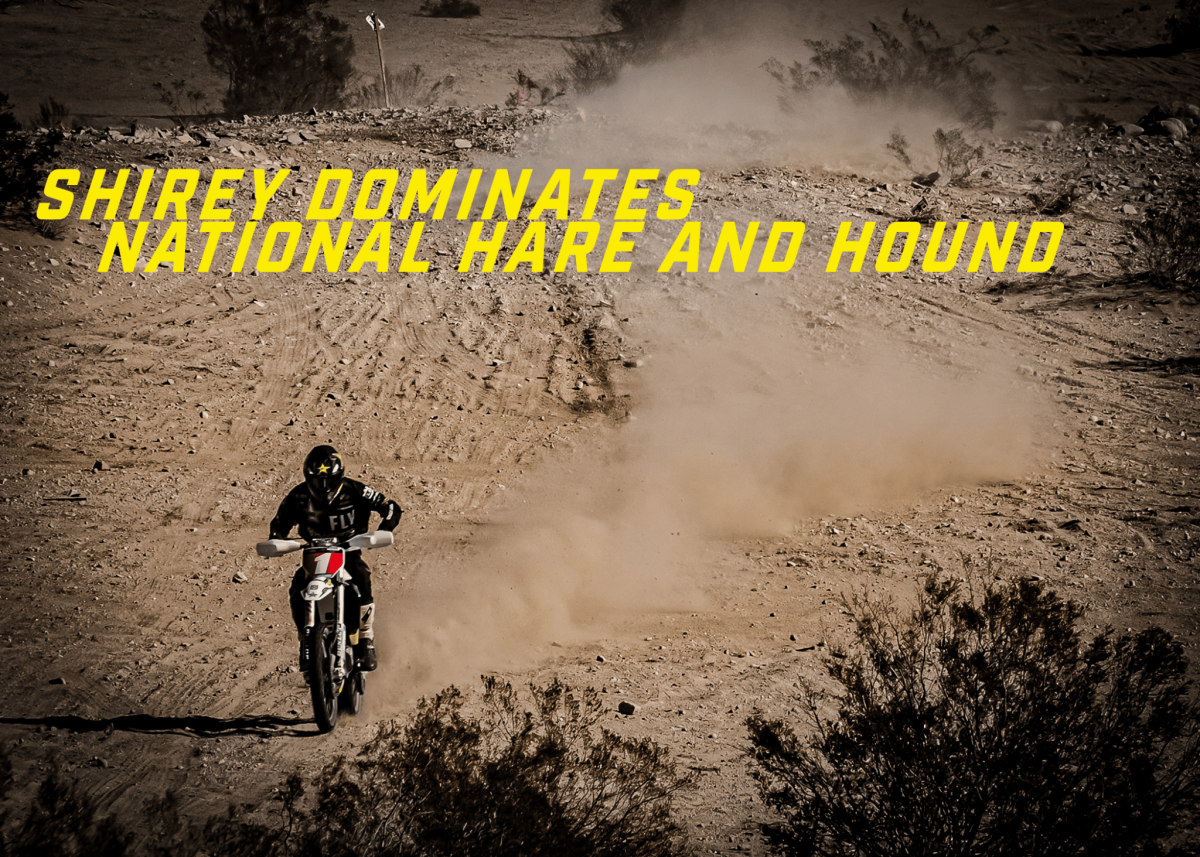 The opening round of the National Hare and Hound took place over the weekend in the dusty deserts of Johnson Valley, California. With the recent showers of relentless rain and even a little snow, the desert floor had retained the moisture making for an epic day for racing through the desert. The Desert M.C., in accordance with the National Hare and hound series, would kick off the opening round of their six-round National Championship, where racers will travel to the likes of Utah, Idaho, and Nevada and finally close back in California. A traditional two-loop, eighty-mile race course was for Sunday’s race and saw over 450+ race entries ready to tackle the punishment of a true National Hare and Hound.

When the banner dropped, and the engines fired, the factory Husqvarna racer and reining champion of Dalton Shirey was first to the end of the bomb. It foreshowed the rest of the day for Shirey and his competition, getting to the front and quickly opening up more than a minute gap by the second checkpoint. In tow behind Shirey was a tag team of the Factory Beta team, Wasson and Roberts, in a battle of their own, couldn’t quite match the speeds of Shirey but continued to press on for the final two podium positions.

Ending the first loop, Shirey started to increase his lead and looked to be out on a Sunday trail ride. However, as the duo of Wasson and Roberts were next to pit, the second wave of racers started to come into the pits. Eighteen-year-old Carter Klein, on his AHM-backed KTM, was next to enter the pits and was quickly followed by the JCR rider of Ryan Surratt. Gas-Gas rider Clayton Roberts was the first Pro 250 rider to enter the pits and was hounded by Canadian Factory Beta racer Kade Tinkler-Walker. Roberts and Walker had both quickly made their move on third-place 250 rider Nic Colanglei.

When the checkered flag waved, Rockstar Husqvarna racer Dalton Shirey crossed the line first and started the season right where he left off, on the top of the box. Factory Beta racer Joe Wasson finished almost two minutes behind Shirey, coming in second on the day. Rounding out the pro podium was another Factory Beta racer, Zane Roberts. Roberts had a less-than-desirable second loop rounding the podium in the third spot. Last week’s NGPC race winner JCR Hondas Ryan Surratt, is starting to make a name for himself as a true Off-Road racer; he ended the day with an impressive fourth overall. Carter Klein showed promise in the opening part of the race; a little more endurance from the young phenom, and he’ll be on the podium in no time; he rounded out the top five in his pro debut. Clayton Roberts, on his SW Construction Gas Gas 250, took the win in the Pro 250 class and finished sixth overall; however, Walker pressured Roberts the whole second loop making for an exciting finish. The two, only finishing twenty seconds apart, made for a mistake-free run for Roberts to clinch his victory and Walkner to settle for second and seventh overall. Coming in 8th was Corbin McPherson on his Husqvarna backed 450; it was a clean ride for the new pro racer. Rounding out the top ten were Austin Serpa and Axel Pearson.

The series will trek north to the deserts of Idaho for round 2 of the series on March 18th and 19th weekend. Looking to race a National Hare and Hound? Click the link here and learn all about it.

If you’re racing the Idaho round, here is a preview of the race course from David Kamo, where he battled at the front for quite some time!