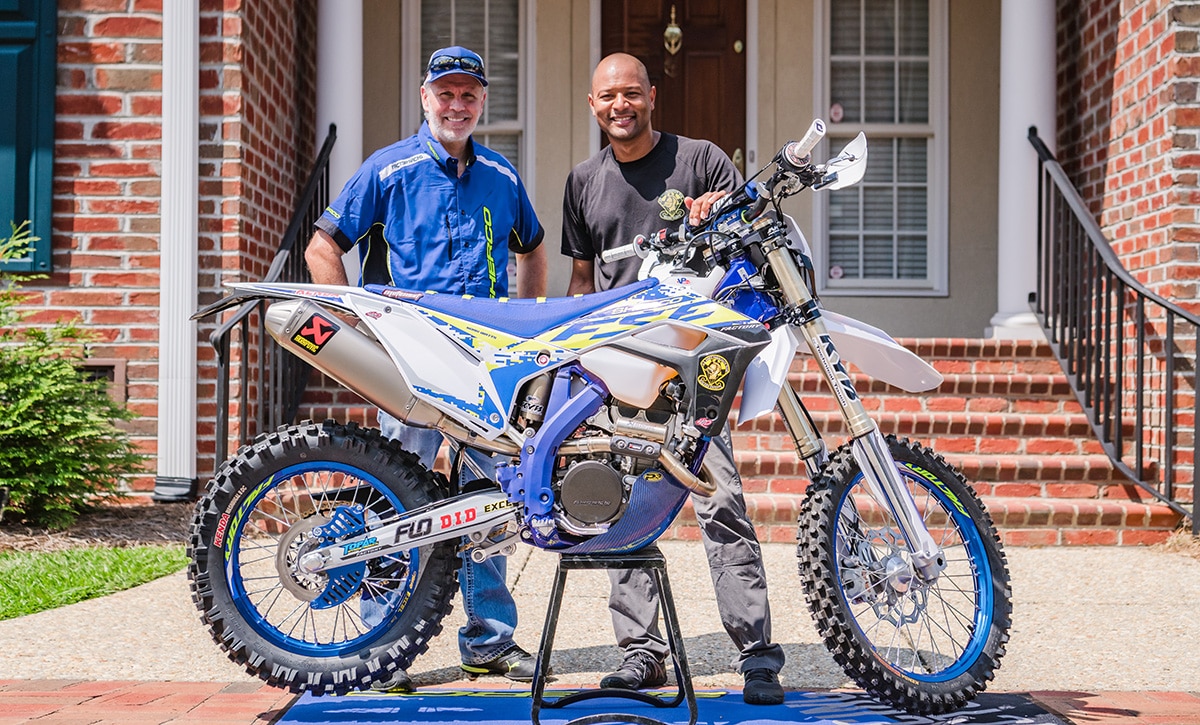 Like many young men, Noah Watts, of St. Peters, Missouri dreamed of owning a dirt bike. He would read all of the magazines, and watch all of the race broadcasts. There were two rules in his home; dad said no dogs, mom said no dirt bikes. However, Noah’s dad did own a 1974 Honda, and he would secretly let Noah ride it at the high school when he was as young as 12 years old. His dad gave the bike to Noah when he was a Junior in high school. It became his only means of transportation, even in snowy winters. 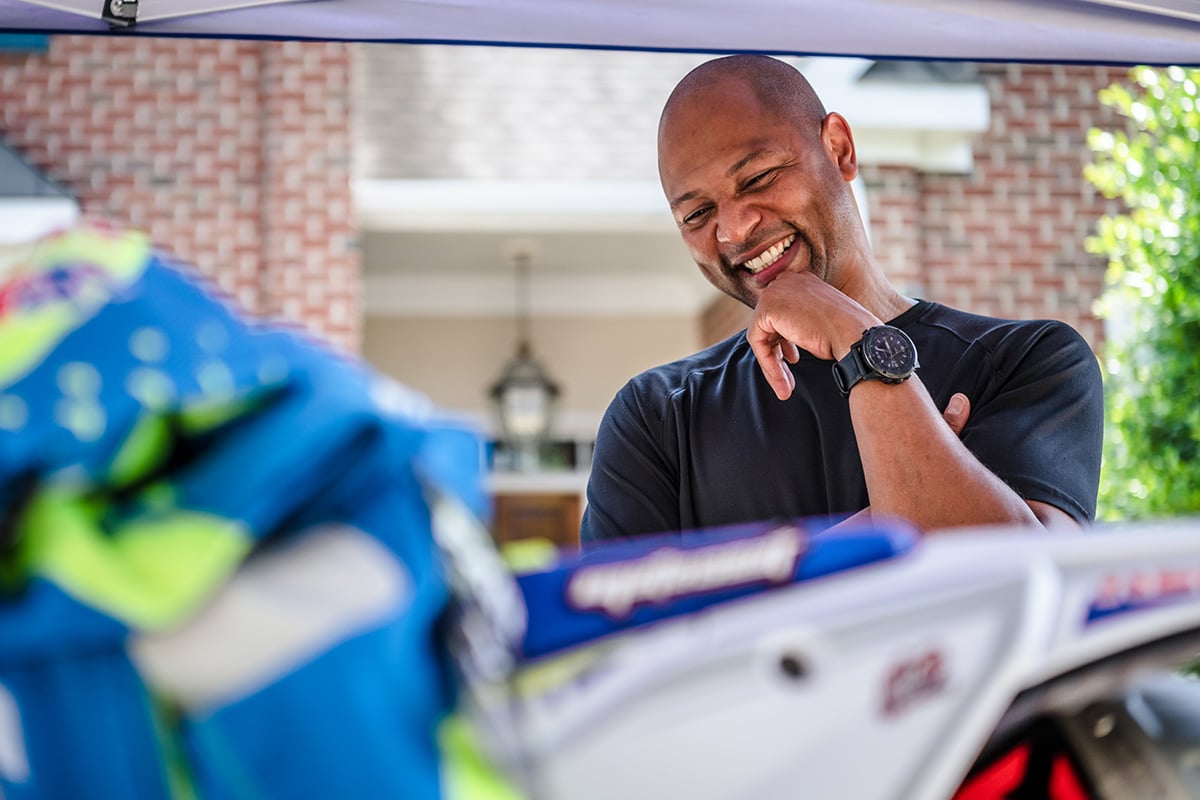 In 2001, Noah shipped out one week after 9-11 on the Naval ship, U.S.S. Bataan, for an 8-month deployment to Afghanistan. Upon his return in 2002, he visited a local dealership in hopes of buying his first dirt bike, but his budget wouldn’t allow it. In the corner of his eye, he saw a gently used Honda Shadow Classic. He bought it, and gave it to his dad to repay him for the gift he had given him in high school. In 2003, he would again deploy to Iraq in support of Operation Iraqi Freedom. He has earned numerous medals from his service in support of the global war on terrorism. During this time, he also served as an Airborne school Instructor at Ft. Benning, GA. Then in 2007, Noah attended the Army Golden Knight’s rigorous assessment and selection program in September of that year. Upon selection, he transferred into the United States Army as an Infantryman. In 2008, Noah finally purchased his first dirt bike. He settled on a 2007 Honda CR 125, of which he still owns. 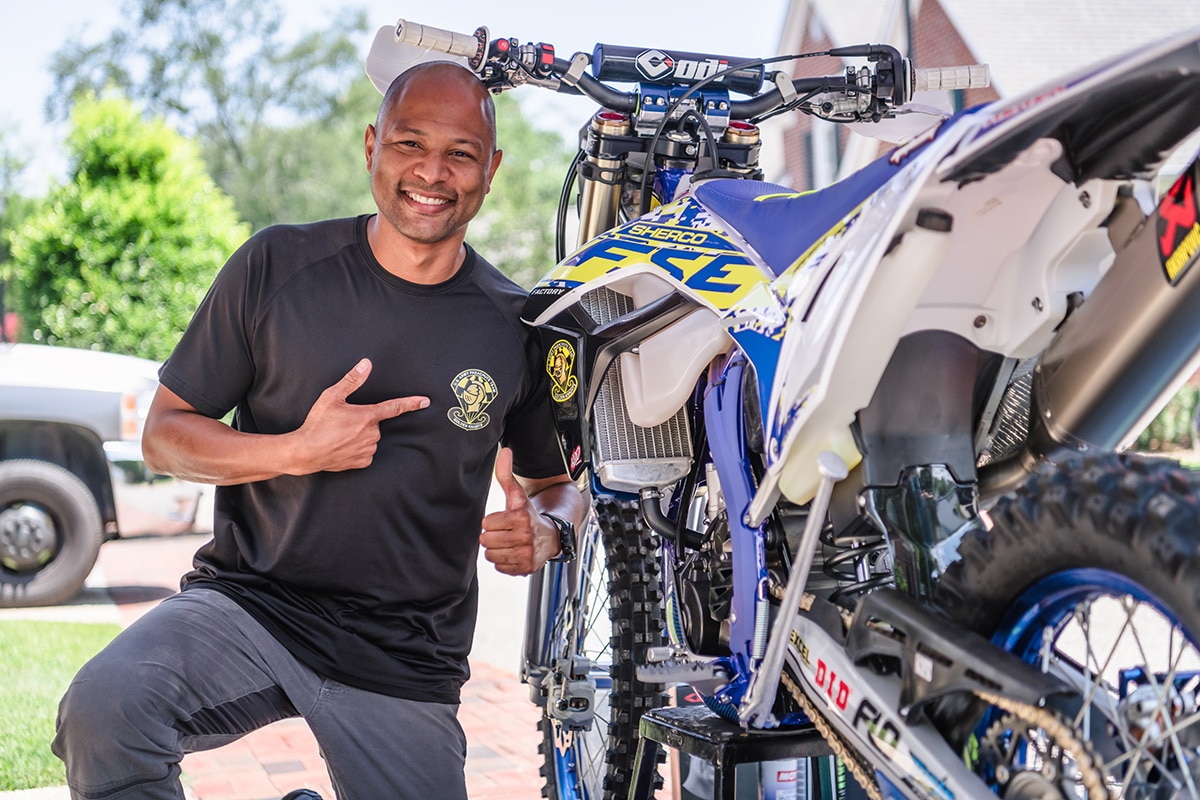 As a member of the United States Army Golden Knights, Noah has performed over 5,000 free fall parachute jumps, 2,000 tandem and over 60 static line jumps and counting. He performs a minimum of two jumps daily, Monday through Friday.

Fast forward to today, and less than one year from full retirement, that old fire that used to burn bright for dirt bikes has been re-stoked. Whether you are a believer in fate or chance, a random phone call to the Sherco USA warehouse would ultimately lead to an amazing connection.
The leadership of Sherco USA and FactoryONE Motorsports had been contemplating for nearly a year on how to best honor a military member. No idea was off the table. Ultimately, the best thing to do was to gift a motorcycle to a servicemember who had sacrificed their passion for dirt bikes in order to serve our country.
While working late one evening, Ron Sallman, owner of Sherco USA happened to answer the phone. It was Noah Watts, he wanted to get more information on the awesome new motorcycles about which he had recently learned. That conversation would set the wheels in motion.
What should have been a 15-minute phone call quickly turned into an hour, and then two. Ron and Noah had an instant connection. The two have similar interests in aviation, motorsports, and the outdoors. They spent a great deal of the call speaking about their favorite airplanes.
Ron rallied the team for a discussion, and the decision was made that Noah had been led to them for a reason. Noah’s significant other, Cassandra, helped run interference on Noah’s end regarding what Noah thought to be the “purchase” of a new Sherco.
The clock was ticking. The team reached out to the founding partners of FactoryONE Sherco, and it didn’t take long for them to lend their support to this build for a great cause. Every partner was on board to create a bike specifically suited for Noah’s needs.
The warehouse started receiving Kenda tires, P3 Skid plates, ODI bars, Bulletproof Designs radiator guards, G2 hand guards, a Mako 360 Bar mount from XC Gear, Motul lubricants, Motoseat covers. There was an amazing graphics package from HBD Motografx, that includes a pixelated camouflage pattern and the insignia of the Golden Knight team on the radiator shroud. Fuel from VP Racing Fuels, a custom kit from FXR Moto, FunnelWeb filters, a 520 EVRT Chain from D.I.D, Flo sprockets, BRP Chain guide, knee protection from EVS Sports, fork seals from SKF, rear rotor guards from Topar racing, boots from Gaerne and a helmet from Just 1 Racing.
Delivery was scheduled for July 15th. Ron made the 9-hour journey to Fayetteville, North Carolina, which is the main city serving Ft. Bragg, home of the Golden Knights. Noah had no idea what was to come. He thought it was a simple delivery from an LTL trucking company, and he needed to be at home to sign for the delivery. When Ron arrived, he set up a Sherco canopy, factory rug, and positioned the bike as if Christmas in July had arrived at Noah’s front door.
The look on Noah’s face was priceless.
Jubilation. Surprise. Thankfulness.
Ron walked Noah around the bike, showing him the donated parts provided by our partners, plus all of the upgrades that come standard on the SEF 300 Factory. After a quick test spin down the road (sorry neighbors), Noah had a surprise of his own. Noah presented Ron with a challenge coin from the Golden Knights.
What is a challenge coin? A challenge coin is a specially designed coin that is given to commemorate membership into an organization or group. A challenge coin can also be given to honor a person for a special achievement. Challenge coins represent organizations, units, and teams. They can also represent an achievement, an anniversary or a special event. They build close-knit, lasting bonds between people who receive them and represent unity. They have a long-standing tradition in military history. Noah told us that the term “Challenge” originated from a time when celebrating servicemen would slap their coins on the bar, and anyone caught without a coin would have to pay for the next round. While many government positions now use challenge coins, and some can even be purchased online, they were originally very rare and represented very elite units. It is still quite an honor to receive an actual coin in this way.
Sherco USA has decided to accept this challenge coin from Noah on behalf of all the manufacturers in the entire off-road community, and encourages everyone to accept the challenge, and recognize the brave men and women who serve our country so bravely.