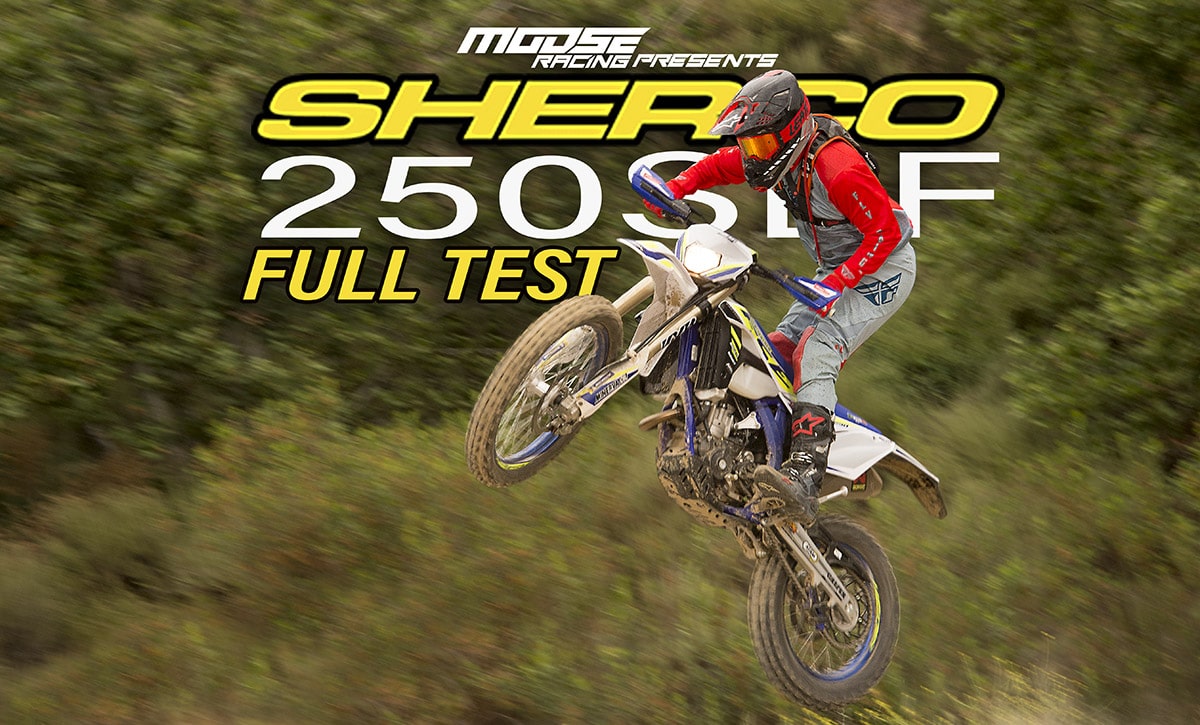 Sherco has made a big push world wide in recent years and that’s being felt here in the U.S. We got a chance to see what all the buzz was about with the arrival of the 2020 250SEF Factory off-road four-stroke.

One year ago most off-road riders in the U.S. thought that Sherco was a vintage Spanish bike—if they thought of Sherco at all. Things have changed. In the last 12 months, Sherco has forced its way into the collective consciousness of American off-road riders with one milestone after another. First, Cody Webb abandoned his factory KTM ride to compete on the FactoryOne Sherco team. Then he promptly won the King of the Motos extreme enduro in Southern California. Not long after that, Steward Baylor came within a few turns of winning a GNCC XC1 class in Georgia. His brother Grant followed up with another podium at the Camp Coker GNCC.

BACKSTORY
Sherco is anything but a vintage bike company. The company has a brand-new factory in Nimes, France, and has only been around for about 25 years. Many Americans get confused by the similarity in name to a ’70s Bultaco model called the Sherpa. This ain’t that. At one time Sherco founder Marc Tessier attempted to obtain the rights to the Bultaco trademark for the sake of name familiarity, but that turned out to be problematic.

The company started off making trials bikes with Ryan Young Products as the U.S. importer. Off-road bikes came later. As of last year, Ryan Young became the official importer for both trials and off-road lines, and that’s when the company made its big push to gain attention with riders like Webb and Baylor. In Europe, Australia and the rest of the world, Sherco was already fairly well-known. Wade Young won the Roof of Africa (again and again). Mario Romain won Hell’s Gate (again and again). Matthew Phillips won the 2016 World Enduro Championship, and Mikael Metge won a stage of Dakar, all on Shercos.

This particular bike is what Sherco offers as its premium-level 250cc four-stroke off-road bike. The “Factory” suffix means it gets a number of upgrades that the standard models (with the “Racing” suffix) don’t have. Both have a 250cc, fuel-injected, DOHC, electric-start motor with a six-speed gearbox; it’s as modern and sophisticated as anything offered by Japan or Austria. The Factory version is upgraded with an Akrapovic exhaust system, KYB suspension,  an upgraded seat cover and special graphics.

RIDE FACTORY
This bike isn’t totally unfamiliar to us. We had ridden it in Italy at a world press introduction in late 2019 and then again in Kentucky a few months later. One big advantage of having a bike in our possession means we get to work on it and live with it. The Sherco is a very well-thought-out motorcycle that’s easy to work on. If you ever have to change an air filter on the clock, the Sherco is a cheater. The seat pops off with a Dzus fastener, and the filter element sits over the battery, so you can get to it in seconds. The quality of all the fasteners is a cut above what you see elsewhere, and the wheels look like high-end aftermarket components. That Akrapovic pipe is pure art. Having the bike also means we get to weigh it on our own scale. The last time we had a Sherco test bike on the scale was almost three years ago. It was a 300SE two-stroke, and it was 244 pounds without fuel. Since then, the company has shaved off quite a few pounds. The 250SEF four-stroke was 236 pounds. For comparison with another off-road 250 four-stroke, the Yamaha WR250F we tested last month weighed 241 pounds. 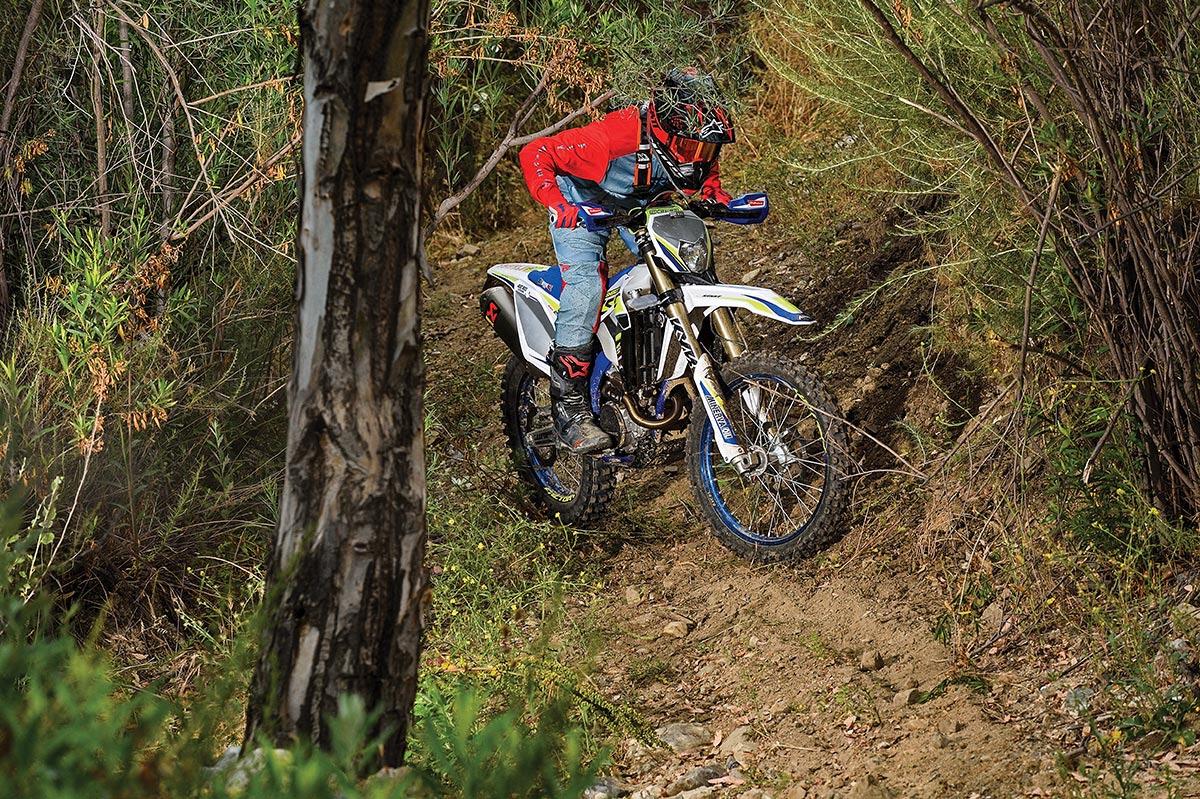 Riding any test bike on familiar trails is like turning the light on. When you’re in a strange place (Kentucky was stranger than Italy), testing is mostly guesswork. And having the recently tested Yamaha WR250 on hand provided a good frame of reference. Clearly, the Sherco’s strong point is tight trails. That’s where it shines. It’s a truly good-handling motorcycle with comfortable ergonomics and cushy suspension. This isn’t an oddball motorcycle just because it’s rare. It feels as mainstream as anything from big companies like KTM and Yamaha. It has reasonably responsive steering without ever feeling unstable or nervous. The engineers at Sherco once told us the reason they don’t offer a motocross bike is because the current frame is designed to be more compliant and that big MX jumps require a more rigid design. We understand completely. The Sherco has a comfortable feel on the trail that’s hard to attain with a motocross bike.

When you get the bike in sand and more wide-open environments, on the other hand, the 250SEF feels out of its element. The motor is somewhat bottled up. The exhaust system is designed to pass the sound requirements at European off-road races, which are stricter than those of the U.S. The Sherco still isn’t nearly as quiet as the WR250F that we had for comparison, but it’s a far cry from being unrestricted like a Yamaha YZ250FX or a Honda CRF250RX. The biggest difference between the Sherco and a full-race 250 four-stroke is that the Sherco doesn’t rev nearly as high. These days, 250 MX bikes make the most of their power at 10,000 rpm and above. It’s a struggle to even get the Sherco into that rpm range. It’s much more comfortable being short-shifted. The bike does have a map switch, but the mild map kills peak revs even more. We’re fine with that type of powerband on the trail, though. There’s nothing as nerve-racking as having to scream a bike all the time. The Sherco has excellent torque with a very smooth power delivery. It’s the type of powerband that’s designed to deal with extreme terrain and allow ordinary riders to cope with extraordinary conditions.

WHERE TO RIDE; WHERE NOT TO RIDE
We have heard people say that Shercos aren’t for western racing, that they’re more for the tight trails of the east. That’s not true at all, but we know why they believe that. If you were to take the 250SEF straight to a desert sand wash, you just wouldn’t get it. It would feel sluggish and boring. But, if you point it into the rocky canyon right next to the sand wash, it’s a completely different motorcycle. The suspension is good enough to absorb the small rocks, and the steering is sharp enough to dodge the big ones. As a trail bike, the Sherco is ideal, but you have to allow it to show you where it shines.

There’s another factor that makes the Sherco appealing to an increasingly large group of riders. It’s not orange. It’s a distinctive off-road bike that allows you to stand apart from the crowd without penalty. Of course, if the company keeps making its presence known in U.S. racing, that might not be a factor much longer.