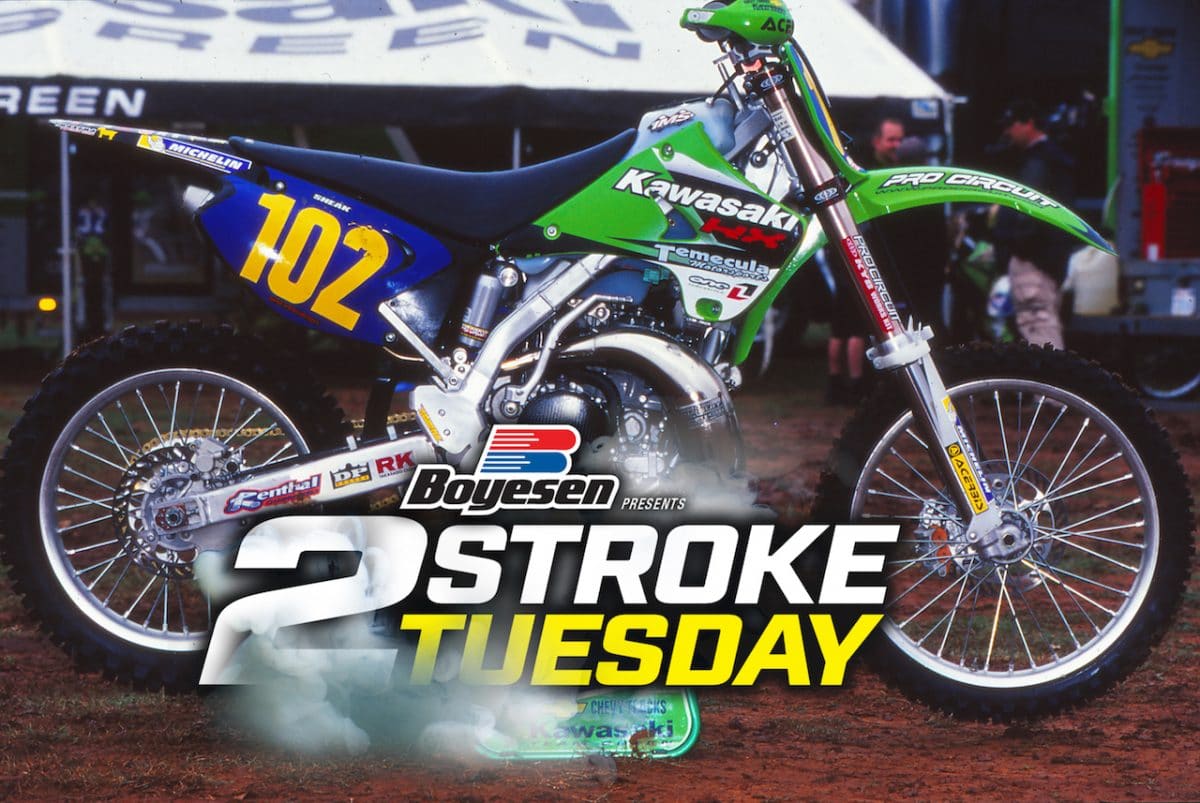 On this week’s Two-Stroke Tuesday we take a look back at Scott Sheak’s 2003 semi-factory Kawasaki KX250 WORCS race bike. We packed 2-Stroke Theater with four off-road premix burning projects that you don’t want to miss. All you early-to-mid ‘2000s Yamaha YZ250 fans are in luck! Click the exclusive link at the bottom of this post to an iconic championship winning factory bike. 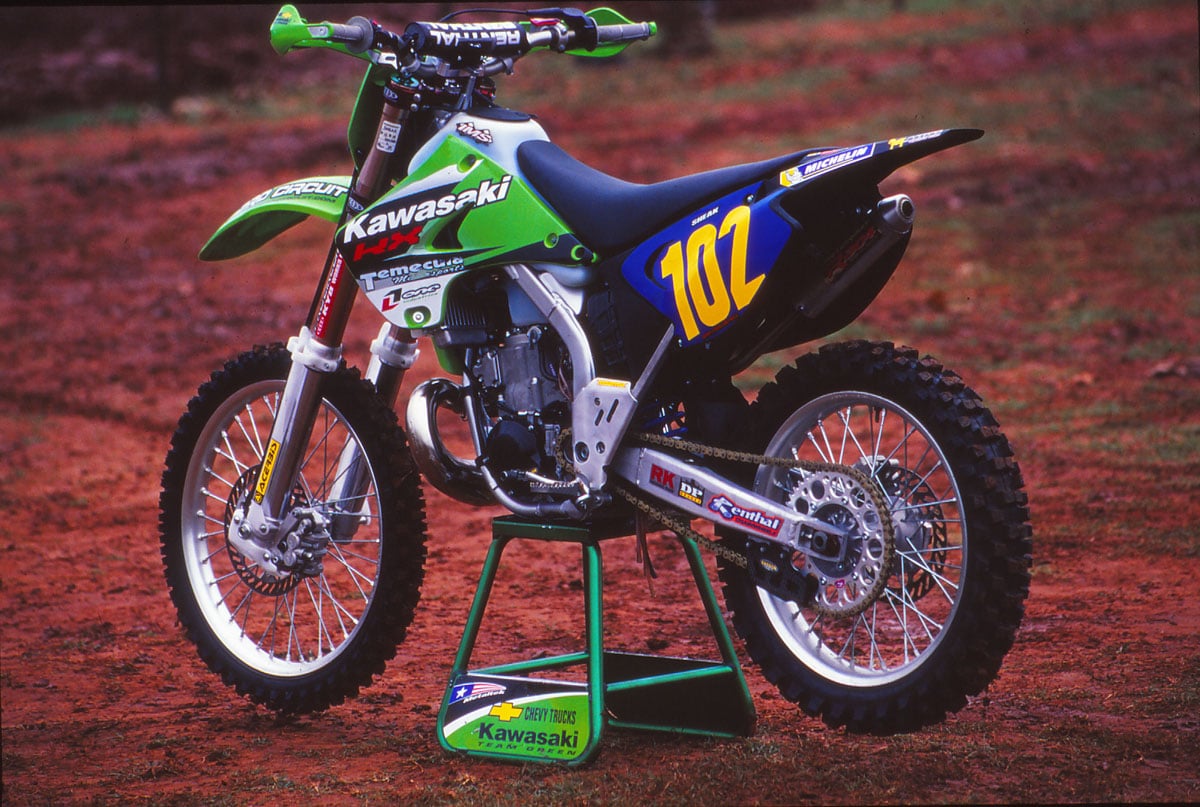 Scott Sheak was trying to transition into off-road racing in 2003. He had strong ties to Kawasaki and they took him in. It wasn’t a full factory ride but it was close. He ran most of the team sponsors that year but bought a bike from Temecula Motorsports and went racing. Scott ended up on the ground a lot but also had some impressive performances. He never made a career of it like in motocross but he was always a threat to win races. 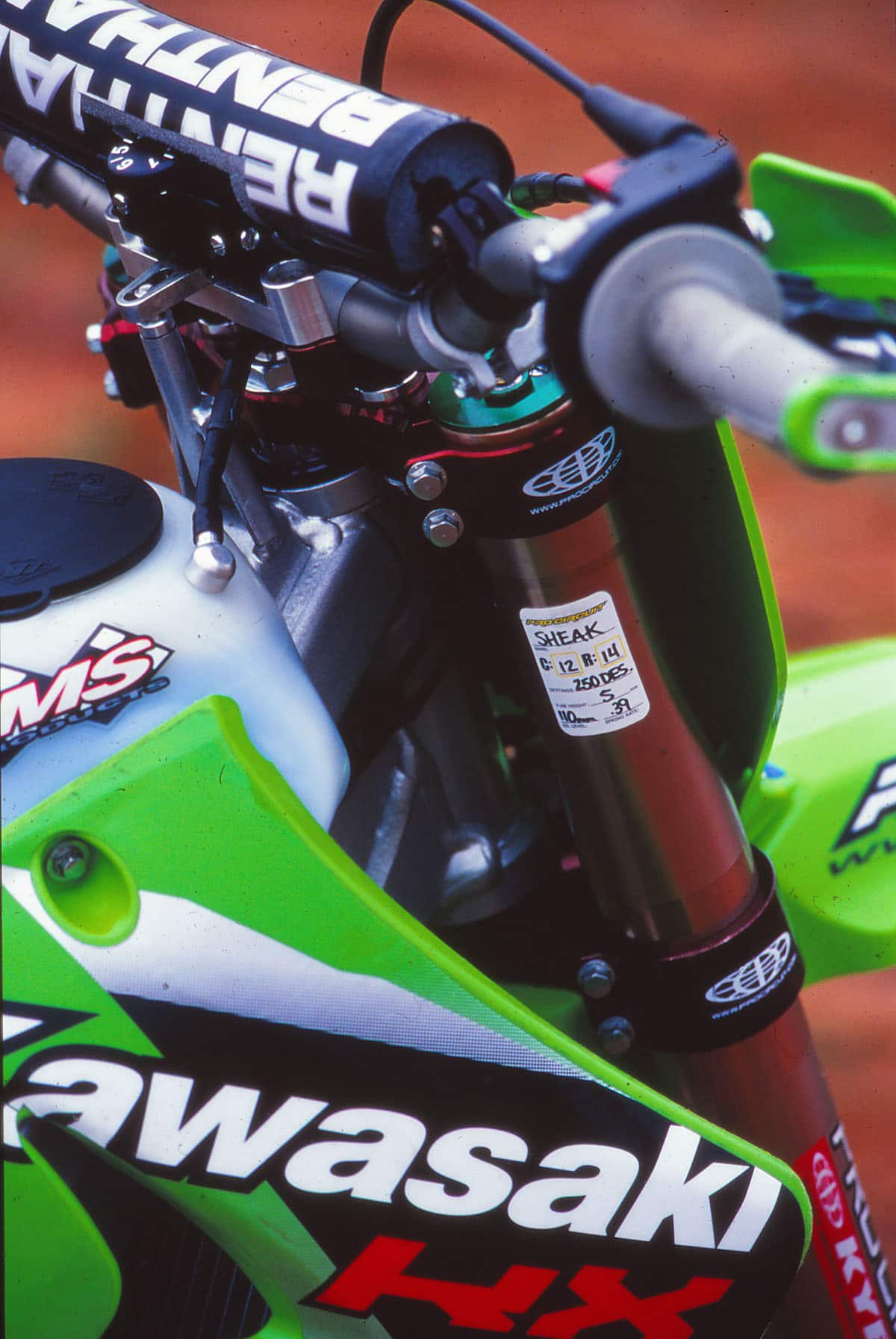 The early years of under the bar mount GPR stabilizers. This was adapted to a set of Pro Circuit triple clamps. These clamps were a lot more rigid than the stock units and usually solid mounted. Not made for rider comfort thats for sure. This trend was pushed hard by motocross racers transitioning into off-road. Notice the weld-on post mount. You had to really want a stabilizer back then 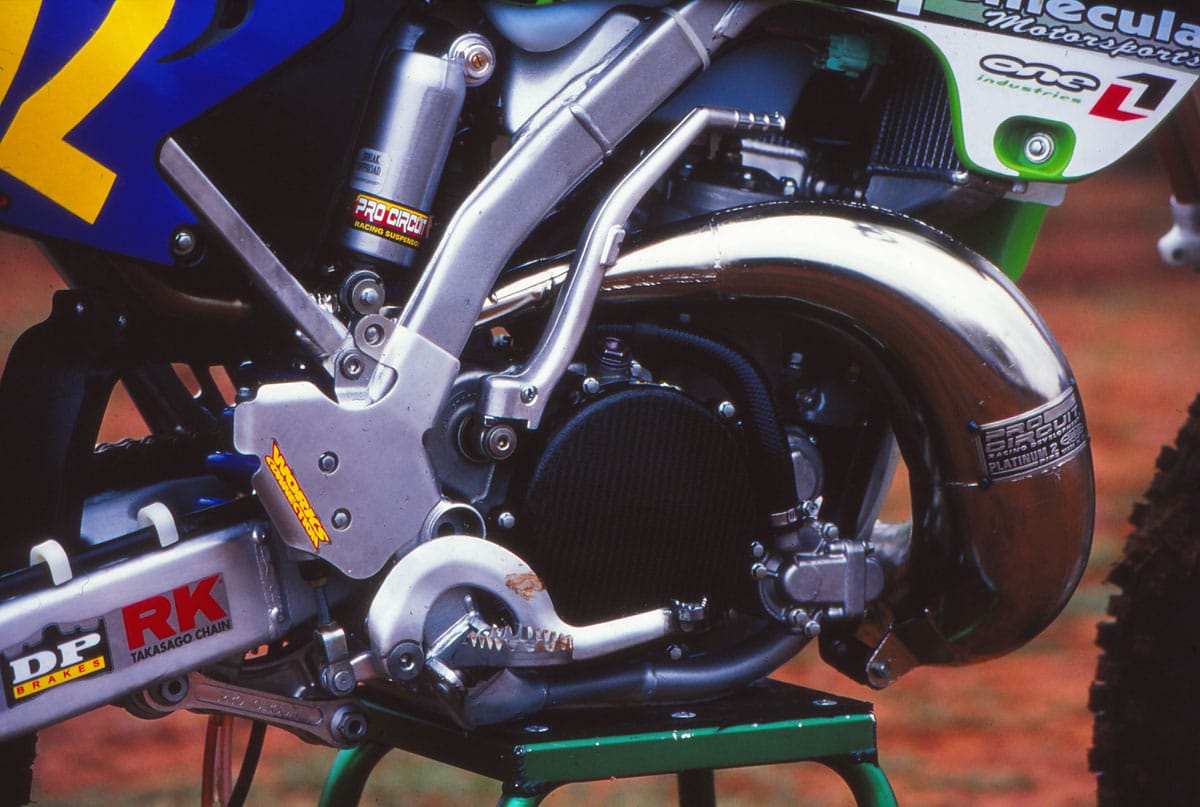 Pro Circuit Platinum 2 pipes were thick and could standup to just about anything! Even back in 2003 Pro Circuit was making custom linkages to match up with their suspension mods. The carbon fiber pieces were made by small company called Carbon Factory based in southern California. All of Pro Circuits race team had these super trick items on them and the parts were made to last. 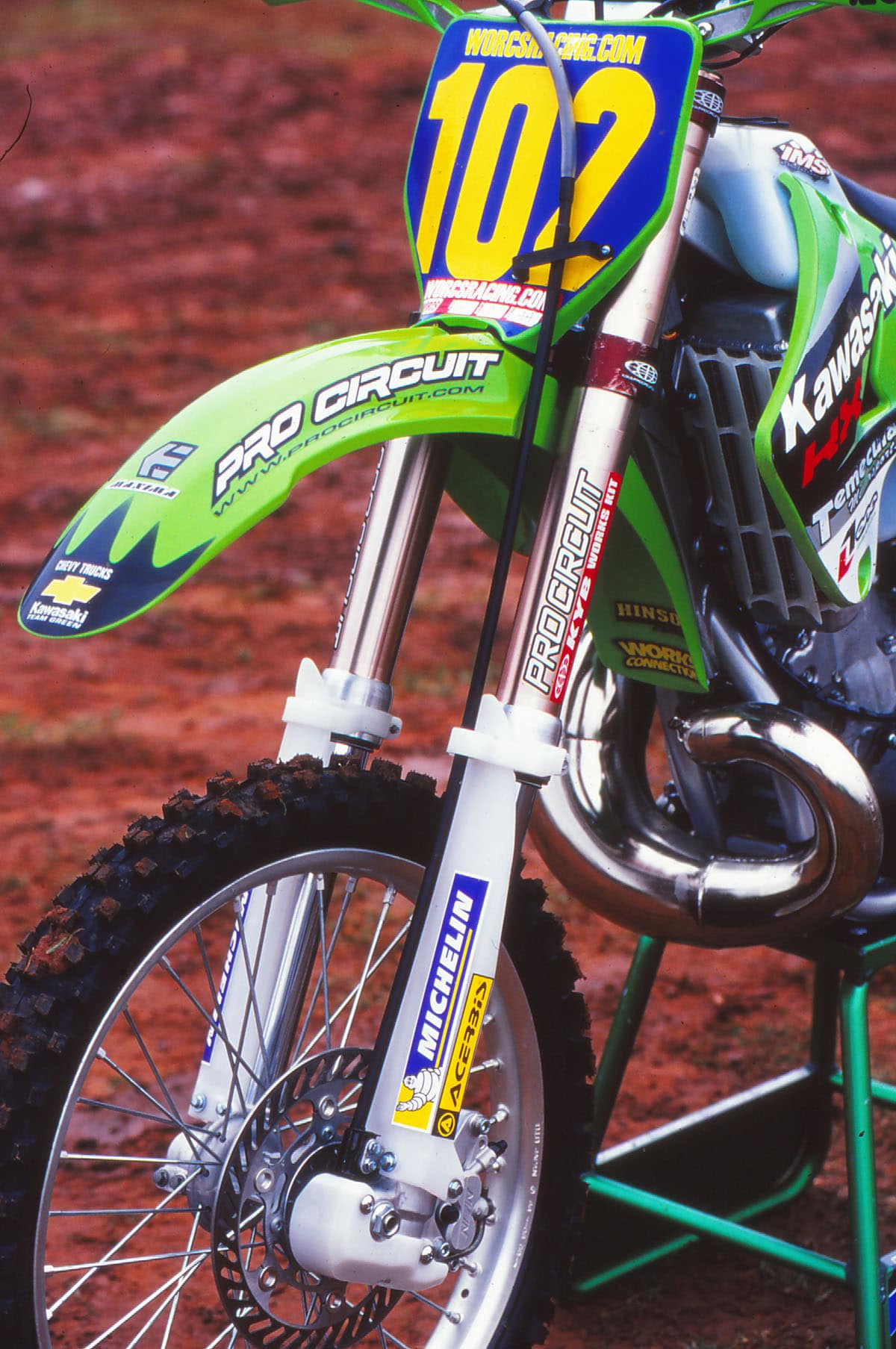 Bones at Pro Circuit handled all the suspension duties for Sheak. That year was full of learning moments for Scott and how to setup a motorcycle to race for two hours as compared to two thirty minute motos was a struggle. 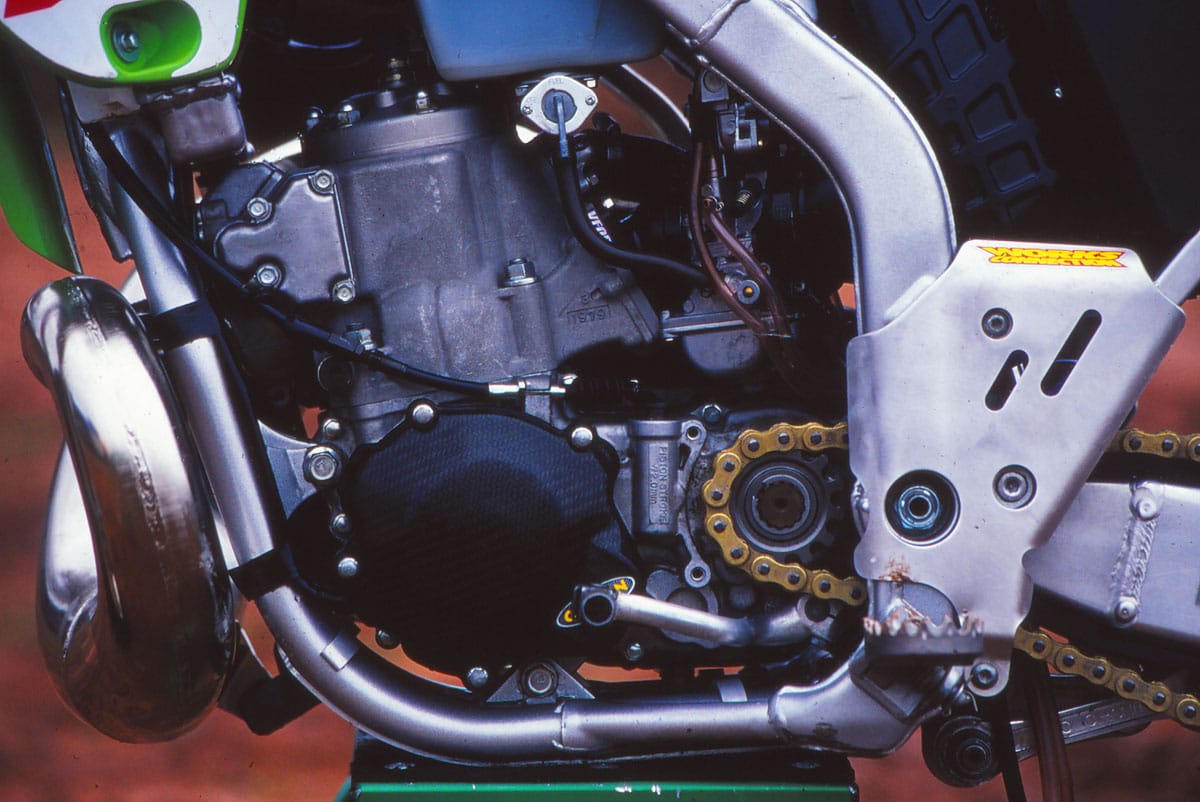 The engine was surprisingly stock. We said his ride was semi-factory and the team wasn’t all about sharing internal modification secrets just yet. You can see a VForce intake system on the outside and the cylinder had some minor work done on it by Pro Circuit. 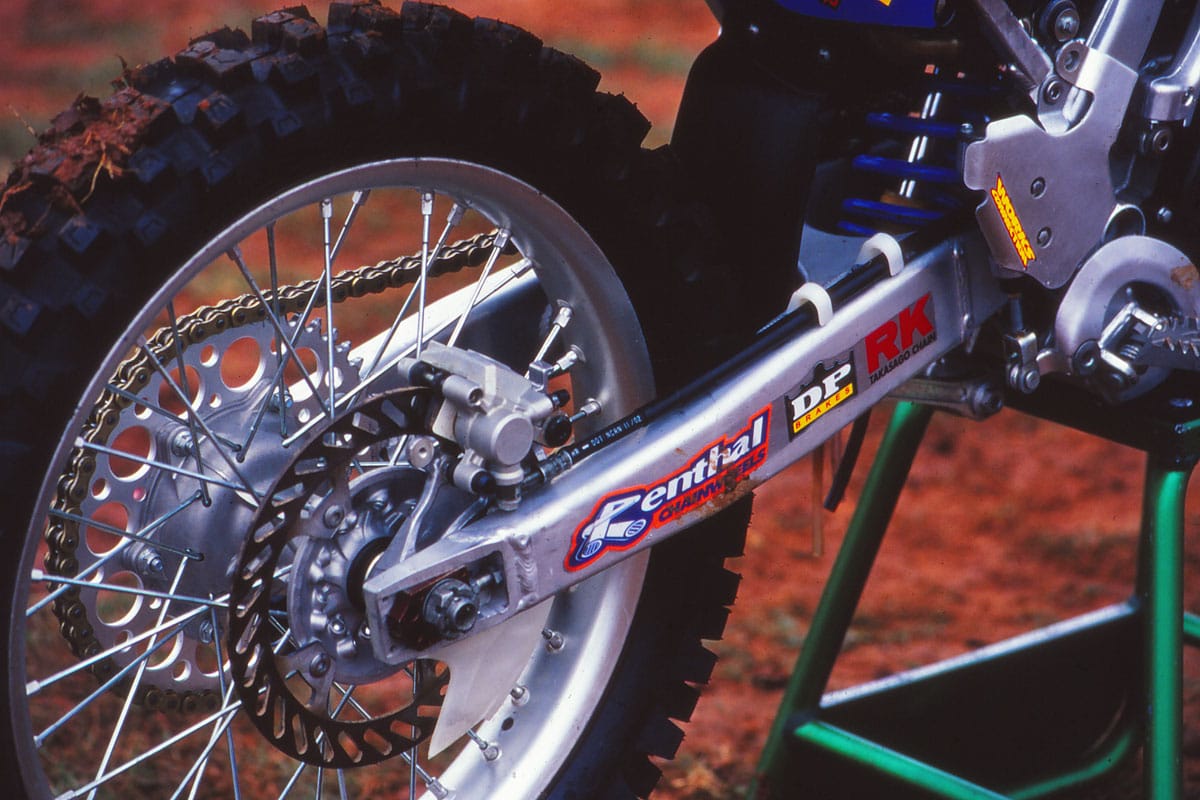 Nothing really anything special here. Stock 19″ rear wheel setup with Michelin tires and a mousse bib inside to prevent flats. 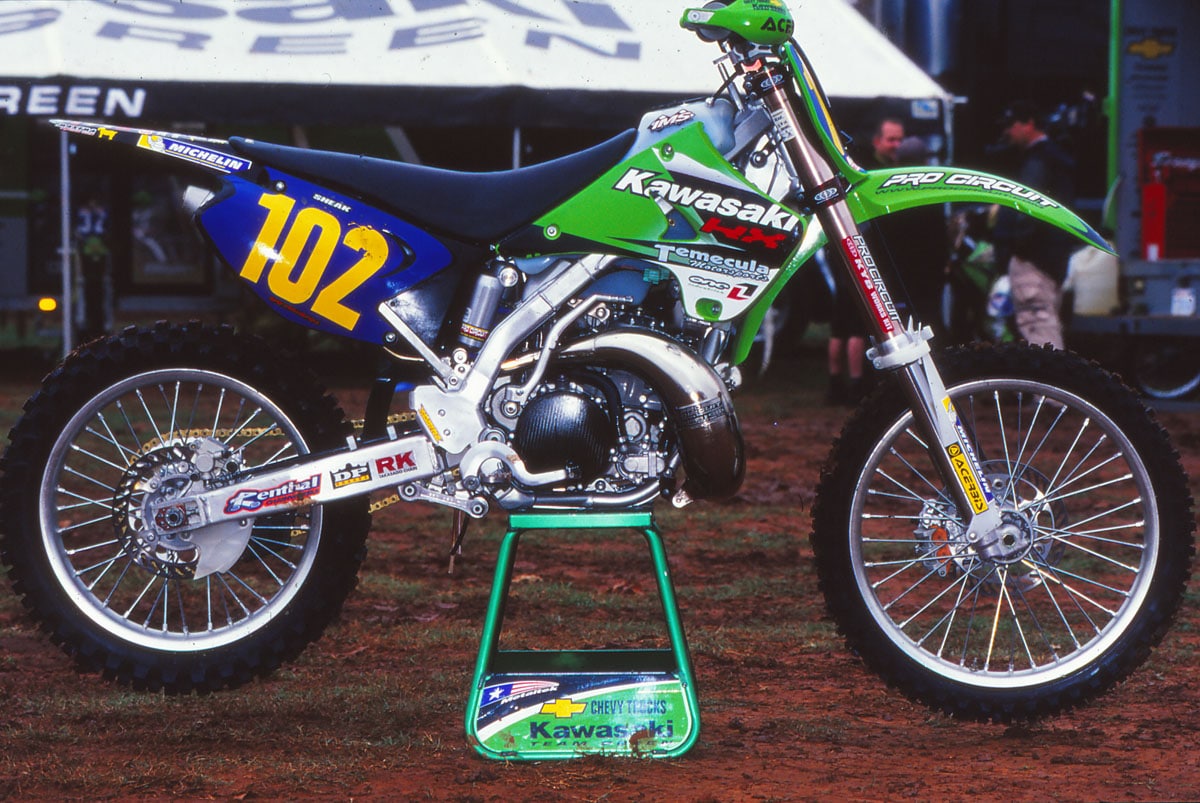 As you can see the machine was heavily influenced by Sheak’s motocross background with products probably still available from companies like Pro Circuit, Acerbis, Renthal, IMS, and Works Connection.

If you like the early ‘2000s machine featured on this week’s Two-Stroke Tuesday then check out Chad Reed’s 2004 factory Yamaha YZ250. Click the image below for more! 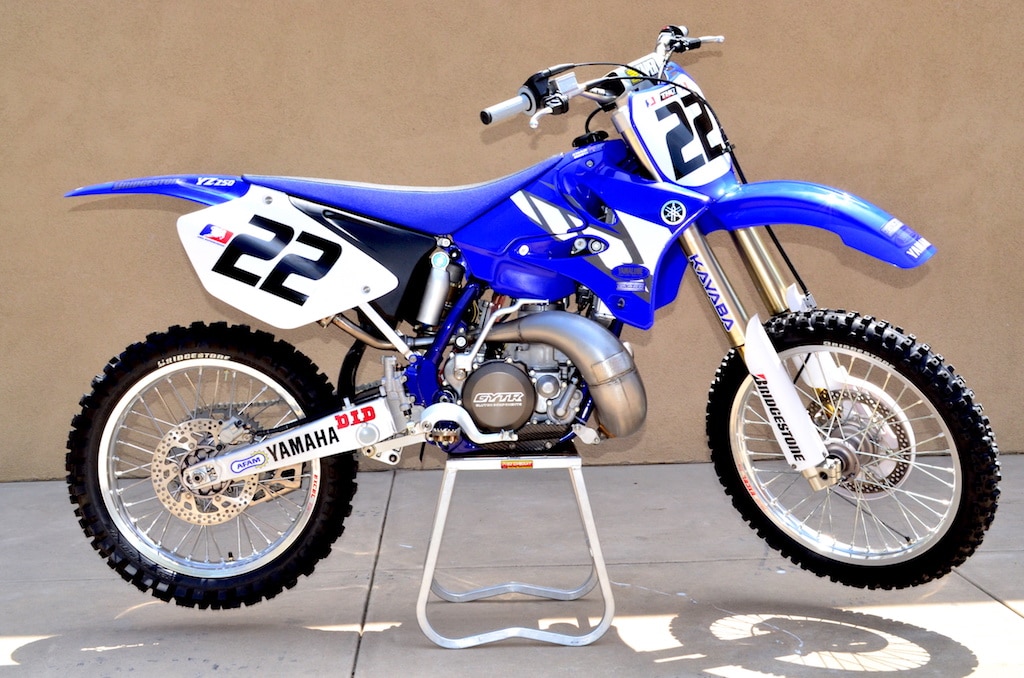