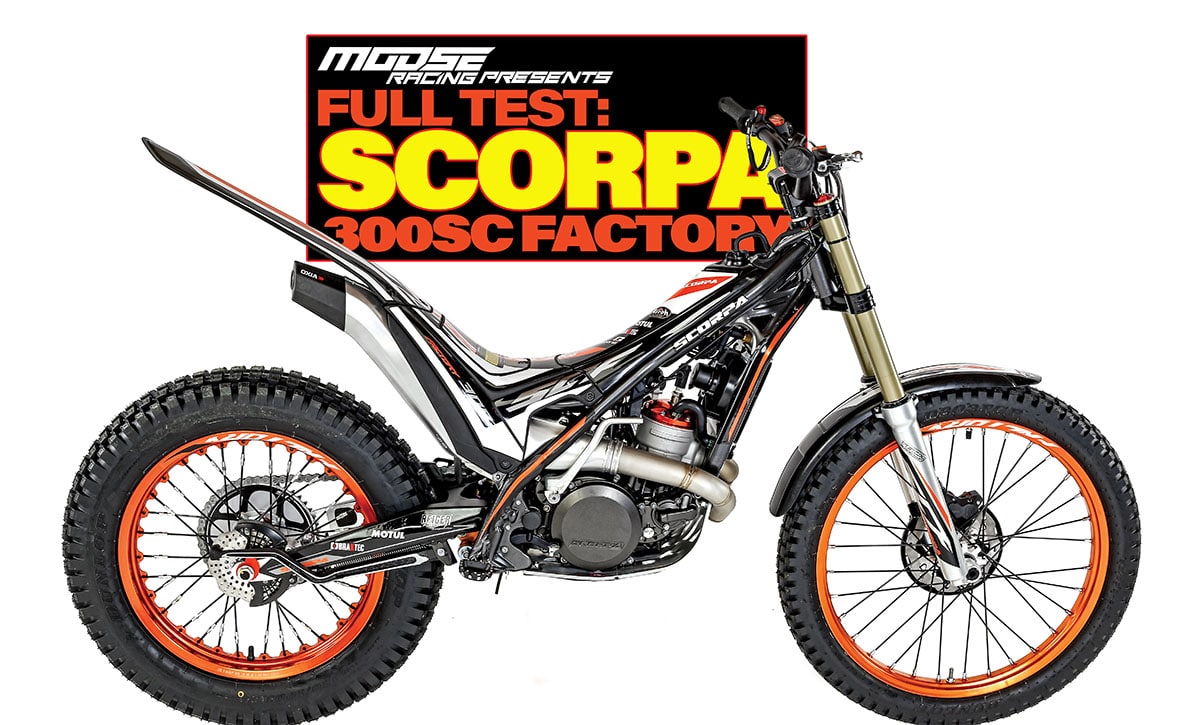 Over the last decade, we have seen a surge in riders taking interest in the sport of trials. It has never been a huge market in the United States, but it continues to gain popularity among riders looking to cross-train and hone their skills for off-road and extreme enduro. The experience gained is undeniable, especially when you look at the top riders on the enduro circuit who use these machines for cross-training. Instead of using momentum to conquer obstacles, trials riding teaches you skills such as balance, making traction, using obstacles as a tool and throttle control to dance through and over terrain that can make for sleepless nights for even factory-level off-road racers. We have been lucky enough to test multiple trials bikes this year, and all have been strong performers. Lately, we have been spending time on the 2020 Scorpa 300 SC Factory, which has a lot in common with its relative, the Sherco FST 300, which we just finished testing. The Sherco and the Scorpa have a relationship that is similar to that of KTM and Husqvarna. The engine and suspension components are the same, and the chassis is very similar with only minor changes. Here is what we learned about the Scorpa.

BEHIND THE SCENES
All trials bikes feature hydraulic components these days, and the Scorpa comes standard with Braktec hydraulics from the clutch to the stoppers. Both the clutch and the brakes perform superbly. The clutch uses mineral oil, so the pull is super light and is easy to modulate. Under extreme abuse and lots of slipping for large obstacles, the clutch suffered a slight bit of fading, but it didn’t take long to regain the full-engagement feel. In most situations, the clutch offered focused and precise action for maintaining pressure over obstacles. The brakes are extremely powerful and come standard with Galfer rotors. There is no shortage of stopping power, and the brakes offer great modulation for the precision needed for trials riding.

Typically kick-starting to life with one kick, the Scorpa features the same engine as its sibling, the Sherco FST 300. Both bikes use a 28mm Keihin carburetor, exhaust, reeds and gearing. But, surprisingly enough, the motors have a slightly different feel. They both rev out quickly to a very high redline, but on the Scorpa, the bottom-end power feels a bit smoother and less aggressive—almost as if it has richer jetting or slightly less compression. The cylinder heads are from the same company, Oxia, and feature interchangeable domes for altering the compression ratio, but we didn’t disassemble the cylinder heads to confirm if they were the same. The Scorpa was also a bit happier to run 91-octane fuel with less detonation, whereas the Sherco felt a bit lean and would ping. Vibration is very minimal and a non-issue, while the exhaust note is very quiet. Keeping the engine cool is important, and the Scorpa comes with a very small and tucked-away electric fan that you’ll find on all trials bikes. The bike also features a dual-map ignition with a sun and rain mode. Overall, the differences were minimal, but the sun mode provided a bit more over-rev for tackling large obstacles. 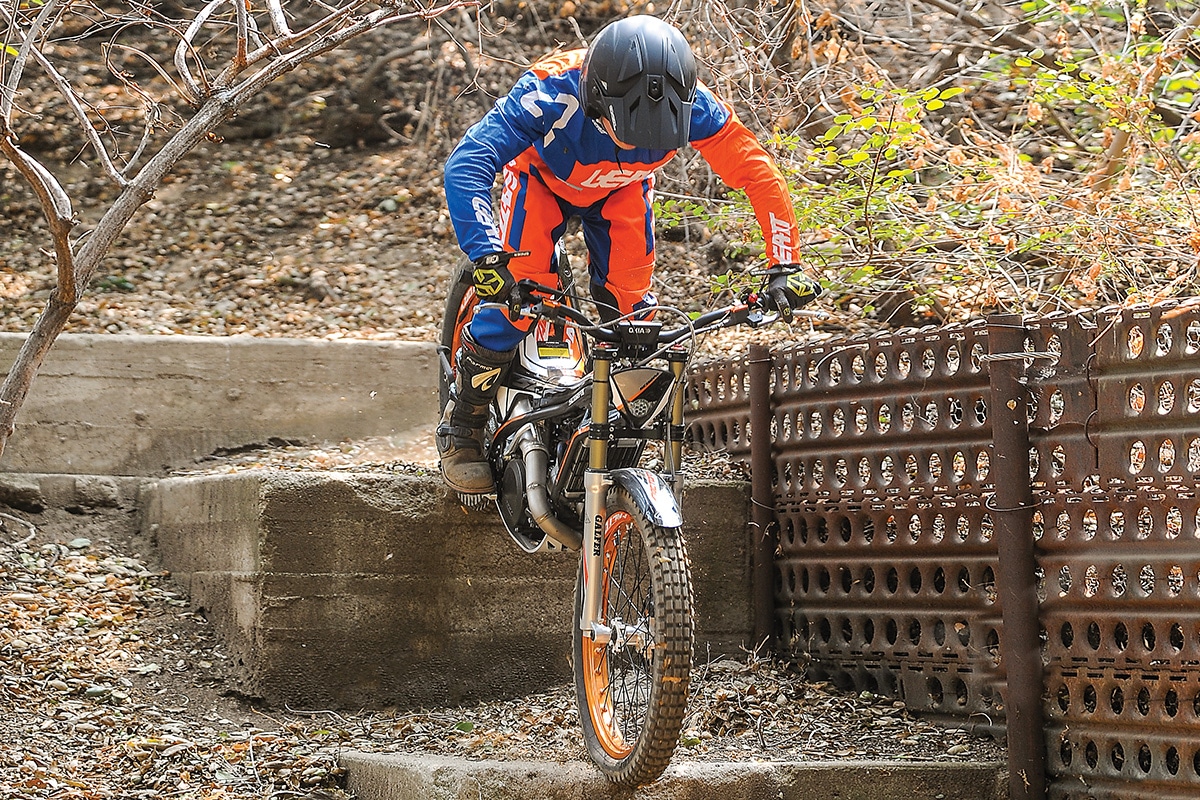 The Scorpa transmission comes with a five-speed gearbox with a security selector to prevent false shifts. As with the majority of trials machines, the first three gears are very close and tight, with fourth and fifth spread out for transferring to sections in a competition. We found that we used first gear for most everything technical. When you are hopping around, second gear is more for big splatters or an insanely huge rock or log where you want to load the rear tire and make traction. Third gear is almost useless in technical riding and is mainly a transfer gear. Fourth and fifth are spread out much taller than first through third.

There are a lot of similarities between the Scorpa and the Sherco in the chassis design and overall handling, but the Scorpa’s frame appears to be a touch different up near the neck around the steering tube. The 0.60-gallon fuel tank features a reserve petcock that will last a few hours of trials riding before hitting reserve. The handling and balance of the chassis are excellent, and it feels incredibly nimble between the legs. Also, the front end feels very light, which made it easy to carry up over the top of a large obstacle on the rear tire without the fear of nosediving.

The suspension features an aluminum 39mm, two-way-adjustable Tech fork up front and a three-way adjustable Reiger rear shock. Out of the box, the suspension was super plush and very forgiving. The Scorpa’s suspension felt like it was already broken in on our first ride, whereas the Sherco took more time to break in. Up front, the fork offers excellent bottoming resistance, yet has plenty of rebound for hopping the bike and for precise wheel placement. The left fork features a progressive-adjustable spring for end-stroke adjustment, while the right fork is the rebound. The Reiger shock offered just as much enjoyment, providing a plush yet firm setting that could be used in a wide range of conditions. It was a very well-balanced setup from front to rear, and the bike felt incredibly stable while balancing or dropping off of a nasty obstacle.

THIS AND THAT
As for the controls, the Scorpa doesn’t short you on topnotch components. The oversized Oxia bars and grips offer a comfortable bend for the rider and feature a great width for complete control over the machine. Scorpa also takes care of your feet by adding S3 Hardrock foot pegs, which offer a stable yet wide platform while remaining plenty sharp. Braktec levers feature a nice bend for sufficient leverage with your fingers for maximum control.

Basic maintenance proved to be a simple affair. Air filter access only required removing one Allen head screw, though the airbox is tight, making it hard to get a hand in to remove the filter. Changing the transmission oil was stress-free with easy access. We mixed our fuel at 70:1, and the Scorpa ran clean the entire time. Adding fuel is not pain-free, as the opening to the tank is tiny and the tank is black, so you can’t see when it is overfilled.

One of the best-looking components on the bike is the wheels. They are Morad rims in a sano-anodized orange color and are wrapped in Dunlop 803GP tires. The Dunlop tires work very well but give up a slight bit of traction to the Michelin brand.

AND SO…
The Scorpa is decked out with only the best components, and the reliability has been excellent. There are very slight differences in feel between the Scorpa and the Sherco, but in all honesty, it comes down to which color bike you prefer. They are virtually identical in performance, and neither bike has better components than the other. The Scorpa felt a little more set up to our standards right out of the box, so that was a benefit. We felt comfortable with minimal setup, which is a huge plus when adapting to a bike. So far, this year has been a superb one for the trials rider looking for a top-of-the-line 300. The GasGas EC300 and Sherco 300 FST now have some strong company in the Scorpa 300 SC Factory. It’s a battle of balance.