SUPERCROSS, ROUND 16: THE CHAMPIONSHIP WILL GO TO THE FINAL ROUND! 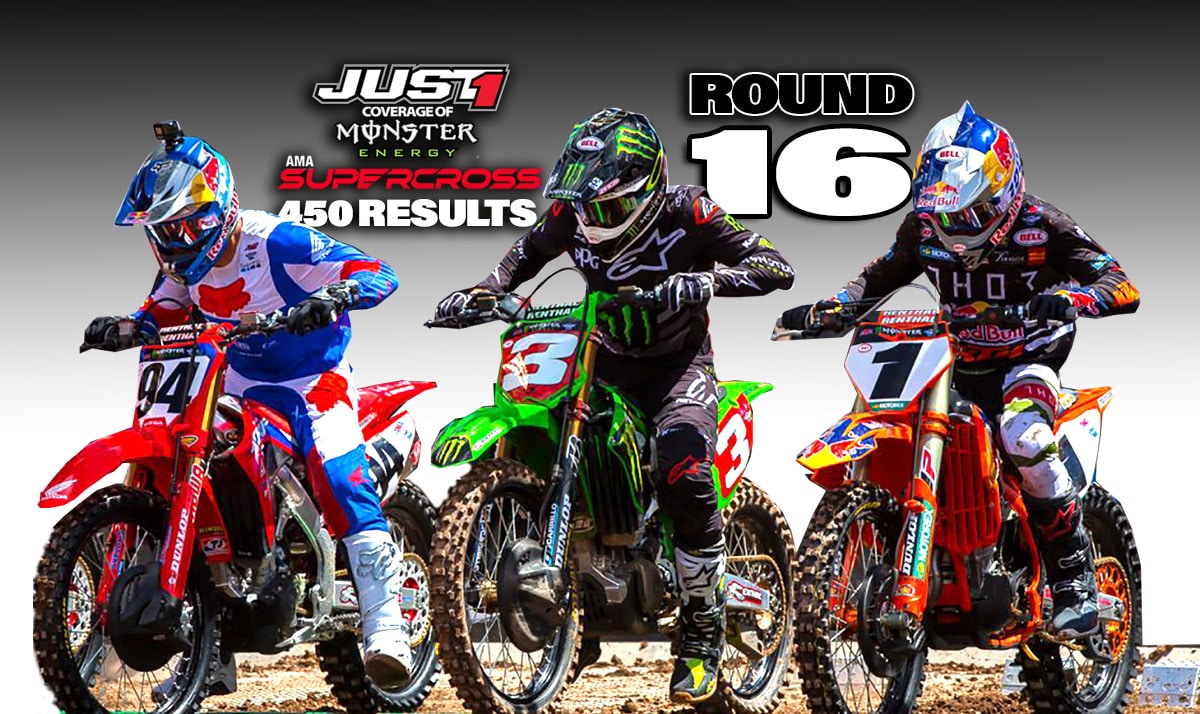 Is Wednesday Webb Day? So far it has been as the 2020 Monster Energy Supercross season continues its stand in Salt Lake City. Cooper Webb has now won all three Wednesday rounds, keeping his title hopes alive as the riders go to the final on Sunday. This was despite an amazing ride from Eli Tomac, who clearly wasn’t playing it safe. He came from dead last all the way to second in what might be one of the greatest rides of his career.  For more coverage of the 2020 Monster Energy Supercross season, click here.

Dean Wilson had a fantastic ride to take heat one over a hard-charging Eli Tomac. Martin Davalos and Zach Osborne were the early leaders while Tomac had to come through the pack. Osborne started making mistakes and losing time in the later laps, eventually giving up the lead to Deano. Tomac followed Wilson past Osborne and then came oh so close to taking the lead. Wilson held on with Tomac, and Aaron Plessinger following.

Cooper Webb and Jason Anderson led the pack into the first turn, then it was Kenny Roczen up front for just a moment. Roczen then got bumped around in the second turn and sunk his front wheel into a muddy section. He dropped out of the top 10, while Anderson took the lead. Cooper Webb, Justin Hill and Blake Baggett followed  as Anderson opened up a small lead. As those riders shuffled around, Roczen picked off rider after rider. By the end of the race, he climbed up to sixth. On the final lap, the battle for the final transfer spot was between Vince  Friese and Chad Reed. In the end, it was Reed who would have to go to the LCQ.

Zach Osborne and Justin Brayton started up front, while Eli Tomac was way back with a terrible start–absolutely last place into the first turn. Cooper Webb and Ken Roczen were in the top five, bumping and grinding through the first few laps while Tomac was absolutely amazing, passing riders two and three at a time to put himself in ninth. Four laps later and he was past Blake Baggett, Justin Hill, Malcolm Stewart and Justin Brayton into fifth. Tomac was clearly the fastest man on the track by the time he caught and passed Jason Anderson at the halfway mark. In all this time, Osborne, Webb and Roczen seemed evenly matched and could do nothing with each other. Tomac passed Roczen then his amazing momentum slowed down when he caught up to Webb, who was right on Osborne’s rear wheel. Both Webb and Tomac passed Osborne and then upped the pace. The two of them rode as if the whole championship was on the line–which it was! If Tomac could pass Webb, he would mathematically wrap up the series a race early. It wasn’t to be. Despite riding a phenomenal race, Eli Tomac would have to settle for second place and send the championship to the final round.