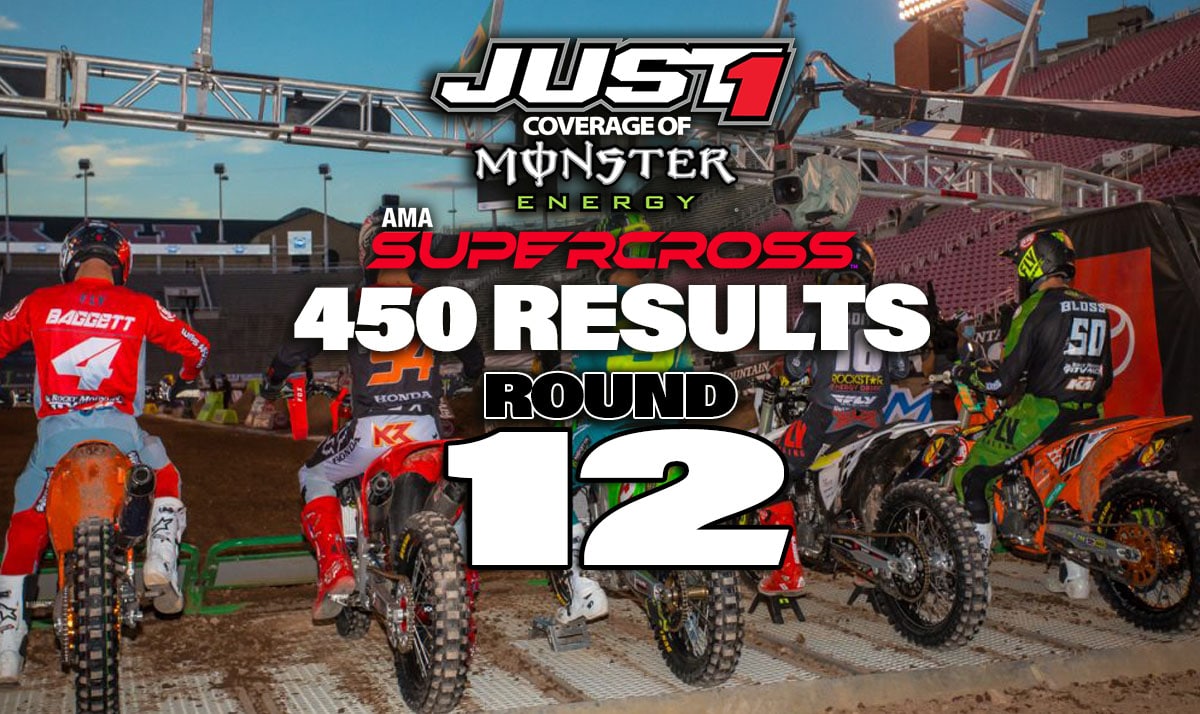 Even though it was the second consecutive race in Rice Eccles Stadium of Salt Lake City, it was a very different situation from Sunday’s race. It was much cooler as the sun disappeared behind the mountains, giving a number of riders hope for a different outcome. It was an opportunity for Cooper Webb to take his turn up front,  winning the main event and keeping his title hopes alive. Still, Eli Tomac was tough for anyone to deal with. He clearly played chess for most of the main, picking off rider after rider on his way to second place and yet another week in the points lead. For extended coverage of 2020 Monster Energy Supercross, Round 12, click here.

The holeshot went to Cooper Webb, with none other than KTM-mounted Chad Reed in second. Malcolm Stewart squeaked past Reed quickly with Anderson following after that. In the early laps, Stewart pushed Webb relentlessly. With one lap to go, Malcolm came alive, passing Webb in the whoops. He held on despite the predictible pressure from Webb to take his career first 450 heat win.

Ken Roczen pulled a beautiful holeshot in heat two while Eli Tomac was buried in the middle of the pack.  Roczen tired to pull away quickly, but made a mistake, pulling another of his amazing saves. By lap three, Tomac was already up to fifth, taking advantage of a crash by Blake Baggett. Soon, Roczen had a 5-second lead over Zach Osborne, Benny Bloss and Kyle Cunningham. Tomac picked off Cunningham next, then Bloss. On the second to last lap, Tomac passed Osborne, but that would be as far as he could go. Roczen won with a 7-second lead. Baggett caught up to seventh, earning a spot in the main ahead of Tyler Bowers and Kyle Chisholm

It was a bar-to-bar start for Zach Osborne and Vince Friese with Tomac and Roczen both mid-pack. Friese went down on the second lap, setting the order at Osborne, Cooper Webb, Justin Barcia, Dean Wilson and Jason Anderson. Tomac passed Roczen, then was passed right back. Soon the two of them were sixth and seventh. Six laps into the race, and Roczen was fourth with Tomac tucking in right behind in fifth. That order remained more or less stable for a number of laps with Osborne continuing to lead but unable to pull away. Right about the halfway mark, Tomac upped his pace, moving past Roczen and closing on Anderson. Two laps later, Tomac took down Anderson. Meanwhile, Webb closed up on Osborne and started pushing for the lead.  With four laps to go, Webb took over, but by that time, Tomac was right there. That set up a Webb versus Tomac battle in the closing laps. In the end, Web kept it together to take the win and close within 13 points of the lead.