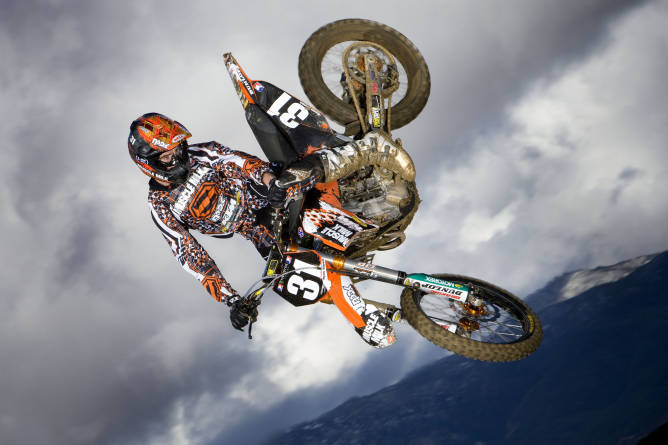 Share FacebookTwitterGoogle+ReddItWhatsAppPinterestEmail
Muscle Milk/MDK/KTM Team rider Ryan Sipes moves up will leave his West Lites bike behind to race the next two rounds of Supercross aboard the KTM 450SX-F at Indianapolis and Daytona. Furthermore, KTM Factory WORCS rider, Mike Brown, a veteran of Supercross, will join Sipes at Daytona under the Jagermeister/MDK/KTM 450 Racing Team tent.

Sipes who has already raced one 450 race at the Houston Supercross is excited to give it another shot. “I had really bad luck at Houston, crashing in my heat and starting dead last in the LCQ. I really like the KTM 450SX-F model. I know that I could do well and I am thankful to have another chance to race this bike.”

Muscle Milk, the title sponsor of the MDK/KTM Lites Team, has allowed Sipes to ride the Jagermeister/MDK/KTM 450 for the next two weekends as both Jagermeister/MDK/KTM riders, Travis Preston and Josh Summey, are out with injury. “We think it’s a great opportunity for Ryan to ride the 450 to get the extra track time and experience and return to the team ready to put Muscle Milk/MDK/KTM 250 on the podium!”  Commented Nikki Brown, EVP of Marketing at CytoSport.

Mike Brown will join Sipes under the Jagermeister tent at the Daytona Supercross. Brown, whose most recent win was at the second round of the off-road WORCS Series, has been riding every event he can over the past few months. “My main focus is the 2009 WORCS Series, but I love racing and I want to race everything I can,” commented the 2001 125cc AMA National Motocross Champion.

NBC and SPEED to Showcase Six Live Broadcasts of 2009!