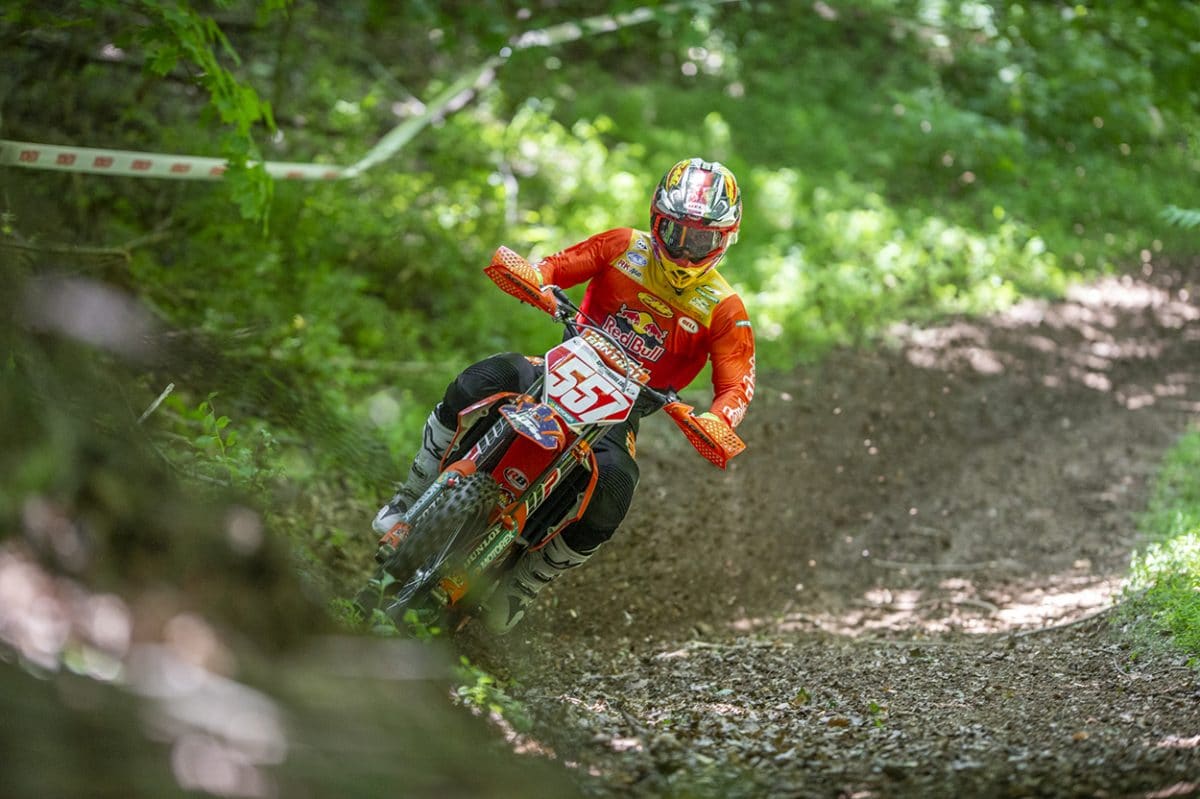 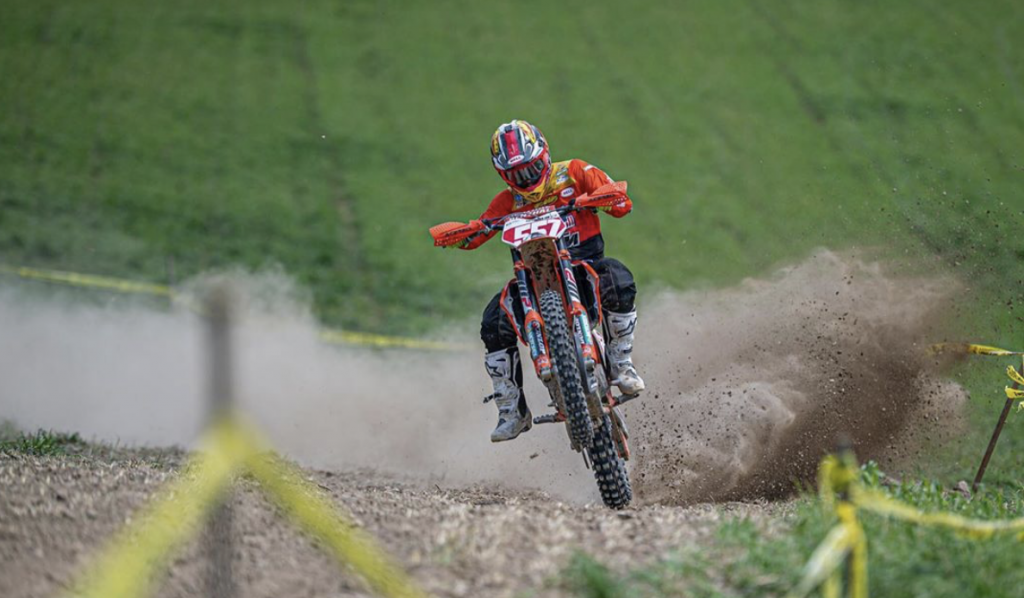 The FMF/KTM Factory-backed Russell claimed four test wins over the course of the two-day event, including wins in the first three tests of the weekend. Russell never finished out of the top three in the remaining eight tests, and after two days of racing his speed and consistency earned him the overall win by nearly four seconds over Rockstar Energy Husqvarna’s Thad Duvall. “Saturday was really good,” said Russell. “I was able to win the first three tests and was really close in the other ones. I rode really well and kept it on two wheels the whole weekend, but Sunday was a little bit tougher. The guys stepped it up in the Enduro test. I managed to win the first Cross test of the day, but not by much. We were all really close in the times on the Cross test, but Steward [Baylor] and Thad kind of picked it up in the Enduro test. I was just having trouble finding where they were going a little bit quicker.”

Duvall parlayed three test wins into a runner-up finish, despite losing valuable time due to a crash in test four on Sunday. “I’ve been trying to work on being better on Saturdays, and this weekend I had a really good day on Saturday,” said Duvall. “I was able to win a couple tests and finish second for the day, really just a couple seconds behind Kailub. I was excited about that, because I knew I’m usually a little stronger on the second day and I came out and was riding really good day on Sunday. In the fourth test I was turning a good time and I just ended up crashing two turns from the finish and losing a lot of time. But other than that, it was a good weekend. I think I’ve lost the last two Full Gas rounds by less than four seconds, but I’m getting better at these. It was definitely a step in the right direction for sure.”

Josh Strang rounded out the podium in third, beating out his Babbitt’s Monster Energy Kawasaki teammate Jordan Ashburn by 11 seconds after two full days of racing.

Jesse Ansley put his Trail Jesters KTM Racing KTM into ninth overall and fourth in the Pro2 class, while Billy Schlag was top-finishing Pro-Am rider in 10thoverall. Fellow KTM riders Brewer Cawley and RJ Cook were second and third in the Pro-Am class.

Tely Energy KTM’s Steward Baylor won Sunday’s round, after not getting scored on Saturday due to the fact that he changed bikes during the day. Steward started out on a KTM 500, which he is scheduled to ride at this year’s ISDE in Portugal, however, it was Steward’s first ride on the bike and he was not comfortable, so he switched back to his 450. On Sunday, Steward changed rear shocks and came away with four test wins to edge Duvall out for Sunday’s win by four seconds. “This was just sort of a practice race for me, since I am riding the 500 in Portugal,” said Baylor. “I just didn’t feel comfortable on the bike Saturday, so I switched back to the 450, but we got it dialed in on Sunday and I felt pretty good.”

Husqvarna-backed Tayla Jones remained perfect in the Women’s Pro class, adding her ninth and tenth wins of the season in Virginia. Jones won four of the six tests on Saturday and five of the six tests on Sunday to beat MEP MX KTM’s Mackenzie Tricker by 41 seconds for the win. Maxxis/KTM’s Becca Sheets was third overall another 12 seconds back. 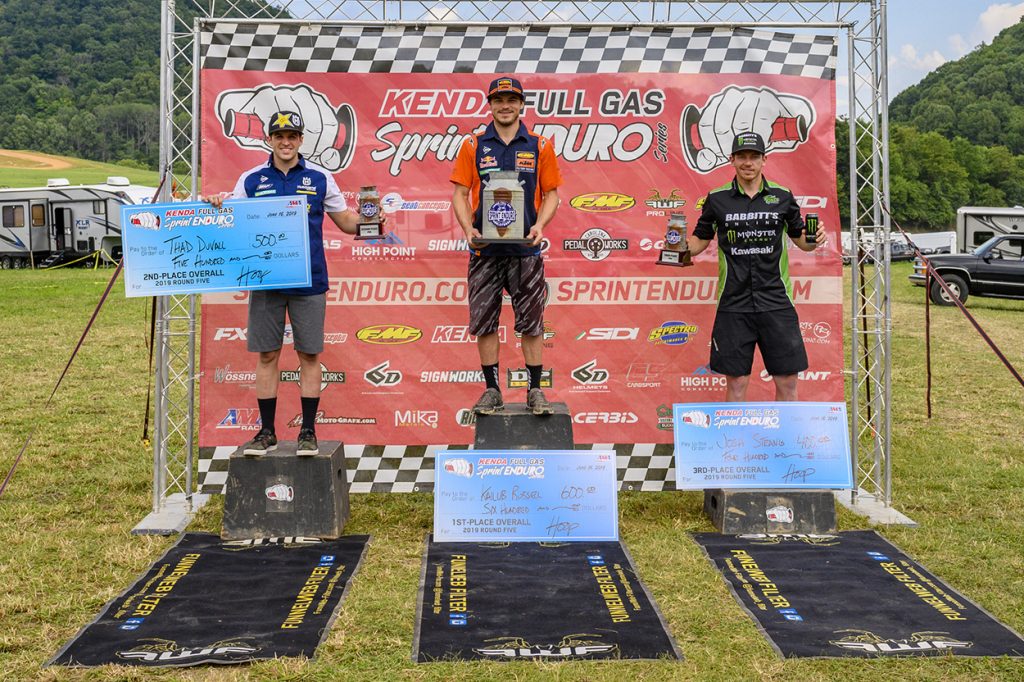