RUSSELL BACK ON TOP AT NEW YORK GNCC 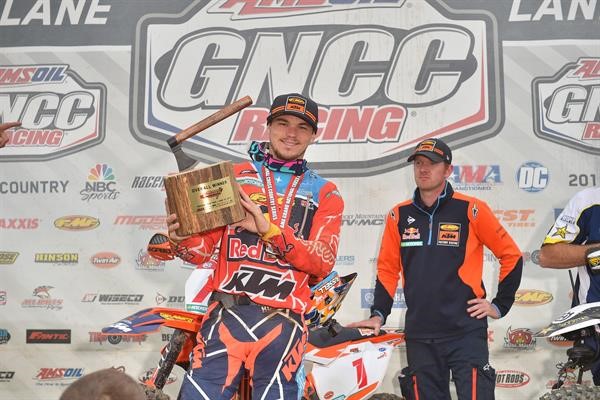 Russell and Bollinger Battle to the Wire at Dunlop Tomahawk GNCC

ODESSA, N.Y. (June 11, 2018) – The 4th Annual Dunlop Tomahawk GNCC continued Sunday, June 10 in Odessa, New York. Round eight of the 2018 AMSOIL Grand National Cross Country (GNCC) Series was greeted with more than perfect racing conditions as temperatures were in the mid-60’s and a cool breeze descended upon Seneca Highlands. FMF/KTM Factory Racing’s Kailub Russell returned to the center of the podium for his first-ever victory at the Dunlop Tomahawk GNCC.

Making his return to the GNCC circuit was Rockstar Energy/Leatt/Maxxis’ Ryan Sipes as he grabbed the $250 All Balls Racing XC1 Holeshot Award. Sipes would run at the front of the pack for the first laps of the race, but he would ultimately finish in the ninth-place position. K. Russell along with JCR/Honda’s Trevor Bollinger would make the early pass and push forward battling amongst themselves as the three-hour race wore on.

Bollinger would come through timing and scoring each lap just seconds behind K. Russell, pushing harder each lap. When the white flag flew Bollinger tried to put on a last lap charge, but he would finish the day out in second just 0.8 seconds behind K. Russell. This is Bollinger’s second appearance on the podium this year, and his best performance thus far in the season.

Just two weeks ago in Ohio, Rockstar Energy/Factory Husqvarna Racing’s Thad Duvall dominated the day, unfortunately after a mid-pack start Duvall found himself unable to put the pressure on the two front-runners. Duvall would work his way up to third on the second lap and remain there for the duration of the race. Duvall stated that even though he didn’t win he was pleased with how he rode throughout the race.

Fellow Rockstar Energy/Factory Husqvarna Racing rider, Josh Strang, finished out the day fourth overall. Strang would find himself in the ninth-place position on the second lap, but he would put his head down from there and make the charge up to fourth over the next few laps.

AmPro Yamaha’s Ricky Russell would run in podium contention during the early portions of the race. R. Russell is no stranger to the top five positions in the XC1 ranks and earned his second-best finish of the season with a fifth overall in New York.

KR4/Husqvarna’s Layne Michael completed the day in 10th overall, and sixth in his class. Michael was running a good pace throughout the race, but on the third lap he would fall back to tenth after suffering from what looked to be a slight injury to his foot. Michael continued to race and push through the pain, where he would earn his fifth top 10 finish of the season.

Factory GasGas/FAR’s Andrew Delong put in a great ride at what is considered the closest race to his hometown in Eastern Pennsylvania. After starting out the day near the back of the XC1 Open Pro pack, Delong would steadily improve each lap working his way up to seventh in his class when the checkered flag flew. Beta USA’s Jordan Ashburn would ride to a solid top ten finish on the day, ending up with eighth place in the XC1 Open Pro class.

Sipes, who managed to grab the holeshot and early lead would eventually fall back through the pack and finish the day in 18th overall, but ninth in the XC1 Open Pro. This was Sipes’ third GNCC appearance of the season since deciding not to return to the series full-time. Solid Performance KTM/Fly Racing’s Jesse Groemm rounded out the top 10 in XC1 but found himself just outside the top 20 overall.

Tely Energy Racing/KTM’s Steward Baylor Jr. and Grant Baylor were not having the race they had hoped for this weekend. G. Baylor was out of the race after completing two laps due to a mechanical issue. S. Baylor was putting in a good ride until he blew a fuse on his bike, pushing him farther back in the pack. Ultimately S. Baylor would only complete five laps at round eight in Odessa, New York. KR4/Husqvarna’s Cory Buttrick would also succumb to issues after only being able to complete two of the seven laps.

As the XC2 250 Pro class started the day it was HK Truck Center/Coppersmith/Ride On Moto’s Joseph Ferraro grabbing the $100 Hot Cams XC2 Holeshot Award. Not long after the start it was FMF/KTM Factory Racing’s Josh Toth taking over the lead. As Toth came through the timing and scoring zone on lap one, he was running second overall on adjusted time just one second behind K. Russell. Toth would ride his own race, pushing to make his move and land on the overall podium. However, he would finish out the day by earning his fifth XC2 250 Pro class win and coming in sixth overall.

Coastal Racing/Husqvarna’s Craig Delong put in his best ride of 2018 finishing second in his class and seventh overall. Delong had a good jump off the line and started his day in the second-place position and was steadily working his way through to try and catch the leader to battle for his first win. Delong’s teammate Pascal Rauchenecker made his return to GNCC after missing round seven due to his hand injury. Rauchenecker had an unfavorable start to the day but proved that his hand was not going to hold him back. He would push throughout the race, coming from eighth and working his way up to third by the fourth lap of the race where he would finish the day.

Current XC2 250 Pro class points leader, Trail Jesters/KTM’s Ben Kelley found himself on the ground in turn two as the race started. Kelley would regroup himself and put his head down after coming through on lap one in ninth place. Trying to salvage points and a top five finish Kelley was able to work his way up to a fourth-place finish in his class and round out the top 10 in the overall results.

KR4/Husqvarna’s Liam Draper found himself running at the front of the pack early in the race. Draper had himself in podium contention on the second and third lap, however he could not hold off a hard-charging Kelley and found himself finishing out the day in fifth. AmPro Yamaha’s Jonathan Johnson and SP KTM/Moose Racing/Kenda Tires Ryder Lafferty found themselves having one of their best rides of the season as well in New York finishing sixth and seventh in the XC2 250 Pro class.

The FMF XC3 125 Pro-Am class took off and it was Coastal Racing/Husqvarna’s Alex Teagarden banging bars with Raines Riding University/Atlas Sales/Yamaha’s Jason Raines as they came around the first turn. Taking full advantage of the other two riders was FMF/Maxxis/RPM KTM’s Jesse Ansley who captured the $100 FMF XC3 Holeshot Award.

Ansley would lead the race start to finish without much pressure from the battles behind him. Currently leading the points, Ansley would take his fourth win of the season and a top 20 overall finish. Raines currently sits 12 points behind Ansley in second, and after battling throughout the day he earned his sixth podium finish of the year.

Teagarden found himself in the fourth-place position with Community Off-Road/Mitas/STS Motorsports’ Jason Langenback right in front of him. Teagarden and Langenback would fight throughout the race for the third-place position, until Teagarden was able to make the pass stick on lap four. Teagarden finds himself currently sitting fourth in points, just one behind third, and 36 behind the current points leader.

When the checkered flag flew for the 10 a.m. race it was Grant Maryott of the Sportsman A class taking the overall victory. However, KTM/Bonaza Plumbing/Trail Jesters Mackenzie Tricker was not far behind finishing third overall and taking her second WXC win of the season. KR4/Husqvarna’s Tayla Jones would finish behind Tricker for second in the WXC class, and The Motorcycle Shop/Tely Energy’s Brooke Cosner came through in the third spot.

The youth race took to the track at 8 a.m. Sunday, where Peyton Whipkey came away with his fifth win of the season. Whipkey is currently fourth in points in the YXC1 Super Mini Sr. class. Brayden Nolette made his second appearance on the GNCC circuit, and first on the youth bike podium this weekend with a second-place finish followed by Tyler Palmer rounding out the top three. Grant Davis took the YXC2 Super Mini Jr. class win and finished the day in fourth overall. Coming through in 7th overall and leading the 85 (12-13) was Cooper Jones and Prestin Raines took the Girls (8-15) class win.