In the October, 1996 issue of Dirt Bike, Roger DeCoster talked about the future in a story called “Motocross Bike: 2000 A.D. It’s kinda fun to look back at what he saw coming.

What will motocross bikes look like in the year 2000? If you had asked that question in 1980, you would have had some very imaginative answers:
• The fuel tank would be mounted under the engine.
• The front fork would have linkage, like the rear suspension.
• Coil-springs would be eliminated, replaced by pneumatics, elastomers or torsion bars.
• Computer chips would alter the jetting, the ignition and the port timing according to need.
• The four-stroke would be completely gone, and other engine configurations would be threatening the two-stroke.
• The boost bottle, BASS mechanism and ATAC valve will be developed to their full potential.

Well, now the 21st century is less than four years away (or three motocross models), so we’re close enough to peek into the next millennia and actually get a glimpse of what we will be riding. How much advancement can come in four years? Look at what’s happened in the last four years. You could estimate that the ’00 model will be as different from today’s bikes as a ’96 is compared to a ’92 model. In other words, not much.

For example, look at Jeremy McGrath’s bikes. He has chosen to keep riding his ’93-based CR250. Sure, they have made some small changes, but it’s still based on a three-year-old machine, and he continues to break records. The surprising part is that this bike wasn’t even designed for Jeremy–at the time he was riding in the 125 class. Did it just happen to fit his style or did he adapt to it? We might never know, but staying on the same bike year after year has been one of Jeremy’s smartest moves. He knows exactly what the machine will do in any situation he encounters. His competition has had to adapt to four different machines in the same time period.

So don’t expect the motorcycle to be reinvented between now and the start of the next century. For us hardcore enthusiasts who love new technology and trick, machined aluminum parts, it’s hard to accept that the winningest motocrosser on earth rides a used bike, but that’s fundamentally true.

So what has happened since the early ‘80s? Aren’t today’s engineers as smart as the ones who made the big improvements back then? Major technological steps can be a double-edged sword. New technology and increasingly sophisticated designs cost more and more to produce and become increasingly intricate to maintain. Prices have now reached the point where the market just can’t support massive changes as it did ten years ago. Tricker bikes mean higher prices, higher prices mean fewer buyers, fewer buyers mean a shrinking sport, and none of us want that. For an example of a sport that grew too fast, look at the sport ATV market. When sales figures for three-wheelers shot up almost overnight, the manufacturers, logically, responded. Technology also increased at a rapid rate. However, the reason ATVs were appealing was because they were unintimidating and easy to ride. Suddenly the machines were capable of going much faster, but nothing said the riders had magically become more capable. The end result was a rapid increase in injury statistics, and that, in turn, attracted lawyers, lawsuits, bad publicity and government regulation. The entire industry came crashing down overnight. 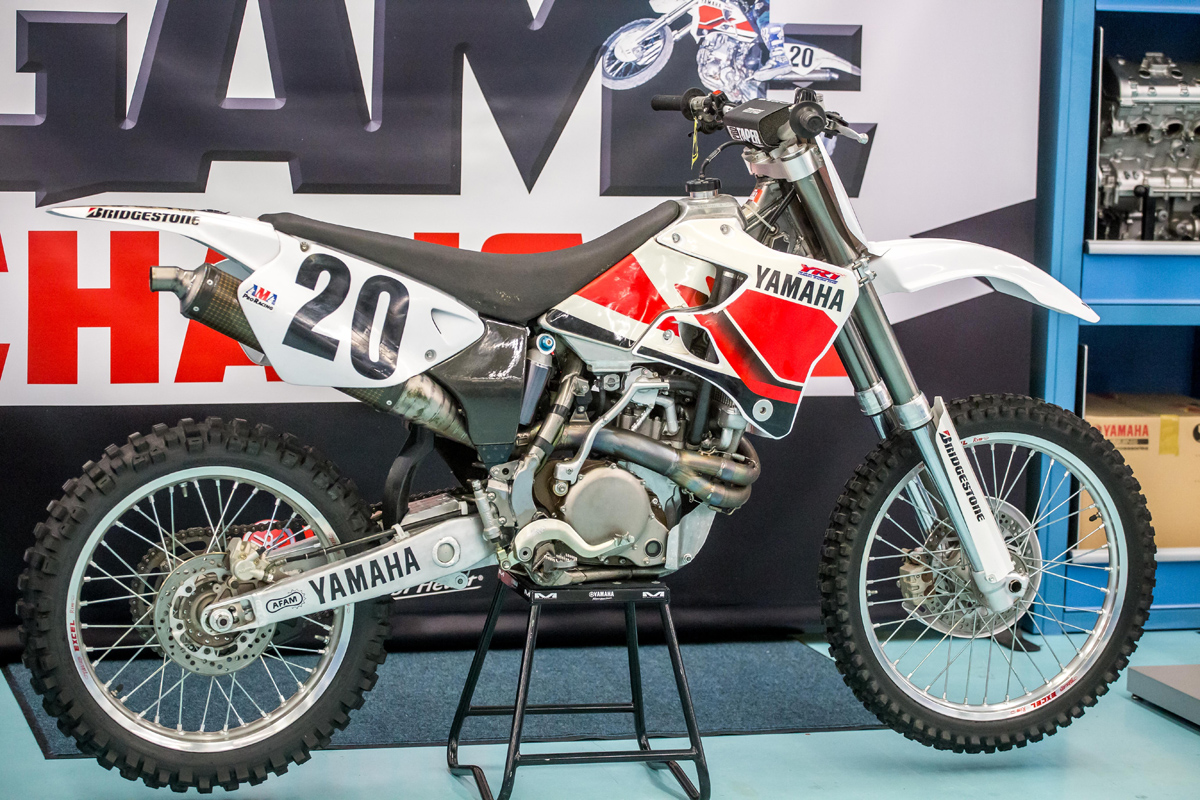 When Roger wrote this, the rumors of Yamaha’s new four-stroke motocross bike were just rumors. Photo by Ron Lawson.

I’m certainly not saying that this can happen to the MX bike market, or that technological advancement is bad, but for the overall health of the sport, it’s better that our equipment develop at a sustainable pace and that we always have a good idea of where we are heading. The average rider can still afford and maintain his own bike. He doesn’t have to wrench on his bike for hours before each ride, searching through technical manuals and struggling with problems. The slow pace of recent years has given us the most reliable bikes ever–right now, the average person spends more time trying to work bugs out of his personal computer than trying to sort out his motorcycle.
However, some changes will certainly come in the next few years. Honda’s ’97
aluminum perimeter frame is certainly a brave design. It’s well-known that Honda has struggled with chassis performance for quite a few years, but when that company decides to seriously tackle a new idea, it will persist until all of the problems have been solved. Whether or not the aluminum frame is an advantage on the track remains to be seen. If it turns out to be a sales hit, then the other manufacturers will certainly follow, and prices will be increased.

So we probably will see more aluminum frames before the millennium, even though the advantages are unclear. As manufacturers play with the idea, though, more will be learned. We will see more “smart” ignition devices. Computer technology has come a long way in recent years and we are just now learning how to use this to our advantage in the dirt-bike world. Then there’s the wild card of government regulation. The conventional two-stroke still has a lot of years left in it, especially for motocross use, but somewhere down the road, the government will start to squeeze us, too. Then designs like Honda’s EXP-2 will come into the picture. Who knows? With the increase in attention and development, we might learn how to make those engines work even better than our current ones.
As for the year 2000, don’t expect front-wheel drive or engines that run on banana peels. Expect the handlebars and seats to be in the same old places–and expect races to still be won by the riders who shut off later in the first turn, fly faster off the jumps and use taller gears.