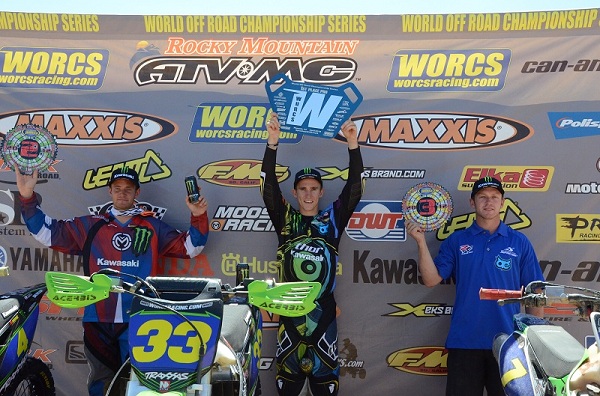 With the temperature well abovethe century mark, training, hydration and planning were added to the formula of speed and talent as Monster Energy Kawasaki’s Taylor Robert took round five of the WORCS Series in Surprise Arizona. Robert, an Arizona native, was well equipped to deal with the 105 degree temperature at the Speedworld course as he went 1-1 and extended is points lead in the WORCS Series.

While many of the top Pro riders struggled with the heat Robert rode with his usual speed, cutting a blistering 9:07 fastest lap to outdistance the all-star field of racers. Quick pit stops and teamwork were also a factor as Robert finished more than a full minute ahead of the rest of the field in both races to take the overall.

“I like it this track because it’s challenging,” said Robert. “The heat didn’t bother me today and I’m looking forward to the next round in Adelanto. Kawasaki has built me a great motorcycle and the team is the best in off-road right now. We’re working really hard this year to win races and stay focused on the WORCS Championship.”

Bobby Garrison took second with a 6-2 performance, charging forward in the late part of race #2 to earn second in the race and second overall.

Gary Sutherlin took the second WORCS podium of his career, taking third overall with a 5-3 finish. Sutherlin also moved forward from the back of the pack, picking off riders and moving onto the podium in the final laps of race #2.

Fourth fell to Robby Bell with a 4-4 finish for his best score so far this season.

Justin Soule finished sixth with Ryan Abbatoye seventh. Destry Abbott returned to WORCS racing for an eighth place finish ahead of Rhett Urseth in ninth and Corey Floyd rounding out the top ten.

Justin Seeds took his first win of the season in the Pro 2 class ahead of Corey Gruffunder and Cooper Hall. Ryan Sandoval took over the Pro 2 Lites points lead by winning round five with Steve Gibson second and Jesse Gore third.
By: Joe Colombero
Share FacebookTwitterGoogle+ReddItWhatsAppPinterestEmail