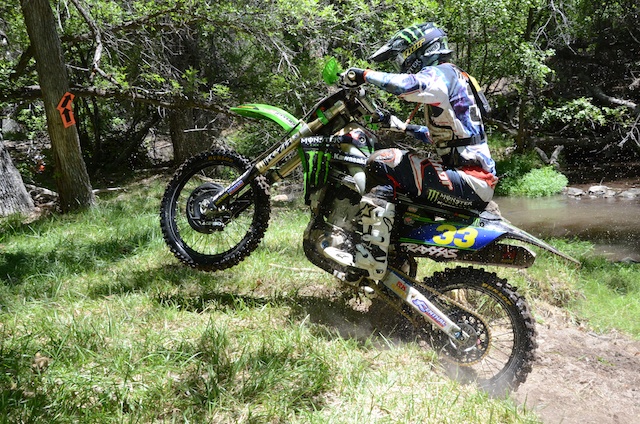 Monster Energy Kawasaki’s Taylor Robert continues to dominate the 2012 WORCS Series after scoring another win, this time at round seven at The Edge Raceway in Central, Utah, June 23-24. Robert pretty much led the whole way during the first race on Saturday, taking the checkered flag by more than a minute over Kawasaki rider Robby Bell and RMP/Maxxis KTM rider Josh Strang.

Robert struggled off the start in Sunday’s race two, but he came from last place to finish second, which was more than enough for him to take the overall win.

‘I crashed a few times and went swimming twice,’ said Robert of the many stream crossings. ‘But it was a good weekend. I really like these pure off-road tracks like this and I was able to extend my points lead for the championship. That’s my main focus this year, to finally win the WORCS Championship.’

Strang, the former GNCC Champion who has been sidelined with an injury since last year, stepped up and surprised everyone with a stellar performance. After taking third in race one, Strang battled his way into the lead in race two and then pulled away for the win. His 3-1 score for the weekend placed him in second overall.

Gary Sutherlin may have had the most fun of all the Pros. He was involved in a race-long dogfight with Strang on Saturday and then led for most of the first hour of Sunday’s race before battling with again Strang and then Robert. His 4-3 finish was good enough for third overall.

The Sutherlin Strang battle was intense on Sunday.

In the Pro 2 class, Corey Graffunder put his Husky to work and took another win. Graffunder led from the first lap and stayed well ahead through the tight woods and stream crossings.

‘This is the best course we’ve had all year,’ said Graffunder, ‘great off-road racing and lots of obstacles. My Husky handled it all and I took another win.’

Kacy Martinez took another win. The three-time WORCS Women Pro champ was stellar on the tough off-road course and won by a large margin. Tatum Sik came through despite frequent falls to make a last-lap pass for second. Nicole Madsen finished third. Sik holds the points lead with three rounds still to go.