Robert is perfect in Phoenix 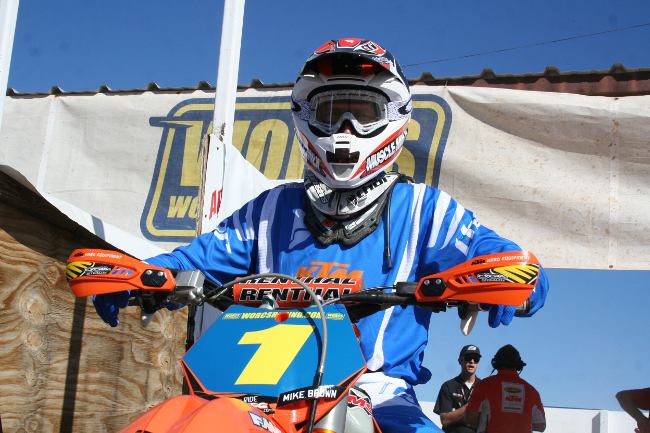 Taylor Robert earned his first Pro WORCS victory at the closing round of the 2009 season. He came to the opening round of the 2010 WORCS season with a new bike, a new number, new gear and a new team but with the same confidence and speed he finished last season with. Robert rode a nearly perfect race to take the opener by 20 seconds over defending WORCS Champion Mike Brown and his KTM team-mate Kurt Caselli.

After taking the holeshot, Robert pulled out to a strong 30 lead over his own Valley Motorsports Team-mate Kyle Summers. Both Robert and Summers were riding new Yamaha 450’s with small tanks, which would bite Summers later in the race. JCR Honda’s Timmy Weigand was pushing hard in third to catch Summers. Meanwhile, mired in the pack were Brown, Caselli, Bobby Bonds, Destry Abbott and Ricky Dietrich.  They had to contend with a host of top riders that included Justin Soule, Nathan Woods, Bobby Garrison, Nick Brozovich and Robby Bell.

The top three held for the first 30 minutes and then things started to happen. Bonds-the 2008 Champion- started a charge that would take him into the top five. Brown, who suffered from early arm-pump also began to move up and looked stronger as the race went on.  Just as it looked as though Bonds was ready to break into the top three his privateer Maxxiss-Kawasaki ran out of gas at 50 minutes. Bonds pushed his bike into the pits, but lost 20 minutes and was out of any chance for a good finish.  Not five minutes after Bonds sputtered to a stop Summers, still running in second place also ran out of gas on the thirsty, small tanked Yamaha. The time lost also dropped him from a sure podium finish.

During the second hour Brown methodically moved up, and started battling with Wiegand. Right on his rear tire was Caselli and Dietrich. Meanwhile, Robert continued to cut fast laps and kept his Yamaha topped off with three pit stops during the two hour main event.

Robert won by more than 20 second with Brown taking a strong second and Caselli third. Weigand held on for fourth ahead of Dietrich with Abbott putting on a good show for sixth.
“I got the holeshot and then just relaxed and rode at my own pace,” said Robert. “I felt great all day and I really like this track, so it couldn’t have gone better. “

“I won the Championship last year through consistency,” said Brown. “So I’m very pleased with a second in the opener. It’s a long season and I want to be on the podium every race, so this is a good way to start.”
“I’m really glad to be racing out west again,” said Casselli who rode the GNCC Series in 2009. “I had a nice battle with Ricky and Timmy to get up on the podium, so I’m happy with a third today. But you know I like winning a lot more.”
Round two is in Primm, Nevada on February 28th.