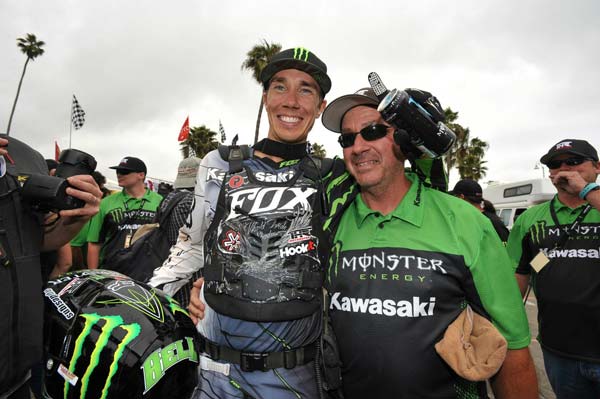 Radio communication is always hard to come by when the bike is on the coast, but we were getting reports that the Honda was closing the gap on us slightly and the KTM would catch and then lose a little as they were struggling with a fuel screw problem.  Steve was riding a fantastic pace up the coast, but Timmy was really hanging it out and had the gap down just under a minute.  David was scheduled to get on at Urapan and ride around thirty-five miles to me at mile 407 where I would take it to the finish.  The Honda got close pretty close at times, but then David was able to pull a gap again and as he got the bike to me I knew the margin would be close and I would need to push it to the finish to make sure we got the one minute plus gap we would need to secure victory.
I mounted the bike and took off for the finish line in Ensenada, feeling great again, pushing the corners like a grand prix race and taking some risks in the silt.  I had a few close calls: the front tire would hit a rock hidden in the silt and send the bars to the stops a couple times, but I was able to save it and keep the momentum going forward.  Behind me Timmy was still on the 1X bike as Colton had suffered a crash over the summit earlier in the race and injured his shoulder, forcing Timmy to ride the finish, with which he wasn’t too familiar.  This was allowing me to pull time to the line, but I didn’t know the gap so I pushed all the way to the finish and as I crossed the checkers the stopwatches began!  I must have had three or four iPhones shoved in front of me when the clock hit a minute, showing me that we were the unofficial winners of the Baja 500!  The Honda crossed the finish line three and a half minutes behind and the KTM was around ten minutes back at the line.  A quick note that we did get nicked for a speeding penalty of a minute and half and I believe it was when I was on the bike; I was a little fired up after the gas fiasco and was a bit too hasty on the highway.  I’m sure now that I was too quick to get up to speed and trying to keep it too close to 60mph.  All it takes is hitting 61 or 62mph for a second or two to get a penalty, but it’s a serious part of Baja racing that we all have to respect and I need to take a few deep breaths before I get on the highway next time.  Luckily it didn’t affect the end result as we maintained a 58 second margin of victory at the finish of it all.

This is a huge victory for me, my teammates and the entire team, from the pit volunteers to the sponsors who support us and it feels fantastic to finally achieve what we’ve all been working so hard for.  A huge shout out to the team: Monster Energy, THR Motorsports, Precision Concepts Kawasaki for building an amazing bike and fielding such a big effort.  The bike performed flawlessly all day, even on the spectator gas, which I’m betting was some quality Pemex, the suspension worked so well in the whoops and rocks and cornered like a dream over Mikes.  A big thanks to my personal sponsors: Fox Racing, Asterisk and Hookit.com, it feels great to get them such a big win.  Thank you to the pit crews and our mechanics, Phil and Ty, for the amazing effort they put in all week long, leading into and throughout the race.  Thanks to Sean Reddish for all of his help and to everyone close to me who kept telling me this win was going to happen.  A big thank you to all of the team sponsors for putting so much into the team and all of their support.  Thanks to my fiancé, who I proposed to on the night before I left for Baja, for keeping me strong when I needed it and always being my biggest cheerleader.  I can’t put into words how great this win feels for myself and the team; we’ve been working so hard and to see it all pay off, especially with the drama that unfolded, makes it so much sweeter.  The Honda and KTM team were excellent and they’ll be stronger at the 1000, but so will we and the culmination to the SCORE series couldn’t be any more hotly anticipated as the team that wins the Baja 1000 wins the 1X plate.  After such a tough San Felipe for us, it really is amazing to be one win away from the championship; it’s going to be tough, it’s going to be brutal, it’s going to be nail biting.  Can’t wait for November!

THE LIFE & TIMES OF THE KAWASAKI KX500